Rebranding campaign encourages Rowan to ‘be an original’ 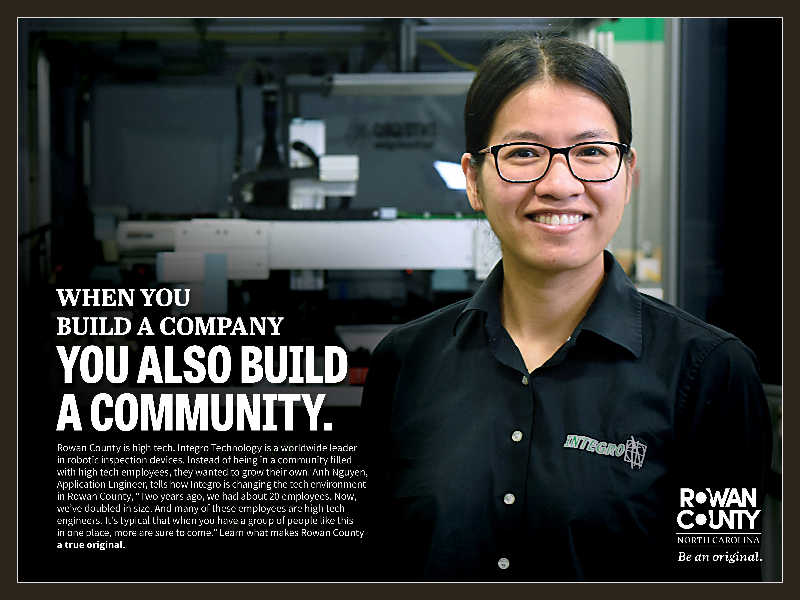 SALISBURY — After more than a year of work, the Convention and Visitor’s Bureau on Thursday unveiled the core of its countywide rebranding campaign.

The campaign focuses on three words — “be an original.” It’s the slogan developed by Tennessee-based firm Chandlerthinks. Steve Chandler, who owns the Tennessee firm, presented an overview of the rebranding campaign, the “brand story,” during the Rowan County Chamber of Commerce’s Power in Partnership Breakfast.

The Convention and Visitor’s Bureau hired Chandler’s firm in 2015. En route to the final presentation, the firm received 1,331 responses to an online survey, held focus groups and interviewed community leaders and residents of other cities. In total, his firm spoke to or received information about Rowan County’s image from more than 1,800 people. It’s the most thorough his firm has ever been with a branding campaign, he said.

During an advanced presentation to reporters, Chandler focused on describing the “brand story” and showed off examples of what an advertising campaign might look like. There are still some unfinished parts of the rebranding, he said. Items such as design guidelines and color palettes for the branding campaign would be presented at a later date. The goal, he said, is to first develop a story before applying it to marketing materials.

The “brand story” is a paragraph that seeks to describe the county’s identity. Rowan County has a “dichotomy of engaging countryside and urban vibe” that comprises a unique character, the brand story states. There’s a lot to celebrate and rally around in Rowan County, Chandler said, because it’s a place where you can truly “be an original.”

He placed a heavy emphasis on the need for Rowan residents to look at the community in a positive light. In a previous presentation to locals, Chandler said his research found that Rowan residents are often more negative about their surroundings that outsiders are about the county.

“We have a lot to brag about and we have to do that,” he said. “We have to believe in ourselves.”

In showing off examples of advertisements or storyboards, Chandler focused on a small list of topic areas — education, small business, economic development and visitors. Each storyboard used a picture of a local resident and included a short narrative with the picture.

One of the many storyboards focused on Salisbury-based Integro. It featured a short quote from application engineer Anh Nguyen, who said: “Two years ago we had about 20 employees. Now, we’ve doubled in size. And many of these employees are high-tech engineers. It’s typical that when you have a group of people like this in one place more are sure to come.”

The narrative on each storyboard incorporated the slogan “a true original” in some way.

A small logo sat in the bottom corner of each picture. The word “Rowan” sits at the top in a bold font. The word “county” sits on the second level down in an identical font. On the third and fourth lines down are the words “North Carolina” and “be an original” in different fonts. Throughout the process, however, Chandler and others working on the rebranding have stressed that a logo shouldn’t be seen as the most important aspect.

Rowan residents shouldn’t expect to immediately see versions of the county’s brand around the region. There haven’t yet been any ad buys, Chandler said. Instead, the Convention and Visitor’s Bureau slowly will roll out the brand to various communities starting in early 2017, said CEO James Meacham. The brand will be presented to communities groups. Meacham listed churches and Rotary Club as examples.

A total of $500,000 in occupancy tax revenue has been earmarked for the rebranding. Initially, however, the Convention and Visitor’s Bureau took out a loan to pay for the rebranding. The contract with Chandlerthinks is roughly $138,000, Meacham said. A total of $400,000 has already been committed to a specific purpose.

He said various firms have been hired to help prepare the brand for its rollout. Salisbury-based Miller-Davis is one of the agencies hired as part of the rebranding. The remaining $100,000 in uncommitted funds will be used to help communities and agencies adopt the brand, Meacham said.

For months, a task force of locals has sorted through aspects of the branding before this week’s presentation.

Soon, the Convention and Visitors Bureau plans to begin a marketing campaign that includes 26 different publications across the Southeast, Meacham said. The marketing campaign may also include some TV and radio advertising, he said.