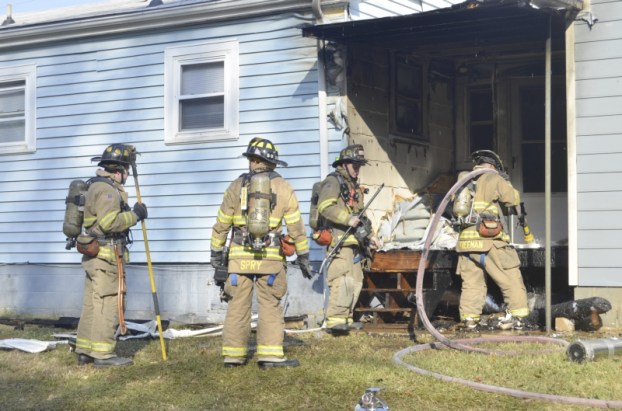 Salisbury, Locke firefighters responded to this house fire at 231 Clancy St. Friday morning. Officials say the fire was contained to the back porch. No cause has been determined as of yet. Shavonne Walker/Salisbury Post

SALISBURY — There were no injuries reported following a Clancy Street porch fire this morning. The fire was contained to the porch, fire officials said.

The fire occurred began around 9:45 a.m. at 231 Clancy St., less than a five minute walk from Clancy Hills Apartments.

It’s too soon to specify a cause, Baker said, but the city fire marshal is investigating.

It’s not clear who called to report the fire or whether the homeowner was still at home when it began.

Baker said there may have been some smoke damage inside the house, but the fire never went beyond the porch. Firefighters were using a fan to remove the smoke from the home. The fire was under control within minutes.

Firefighters from Salisbury City and Locke responded to the fire.

About a month ago firefighters were at the house next door after the homeowner called to say they saw smoke inside. Officials determined in that case it was the heating and air conditioning unit.