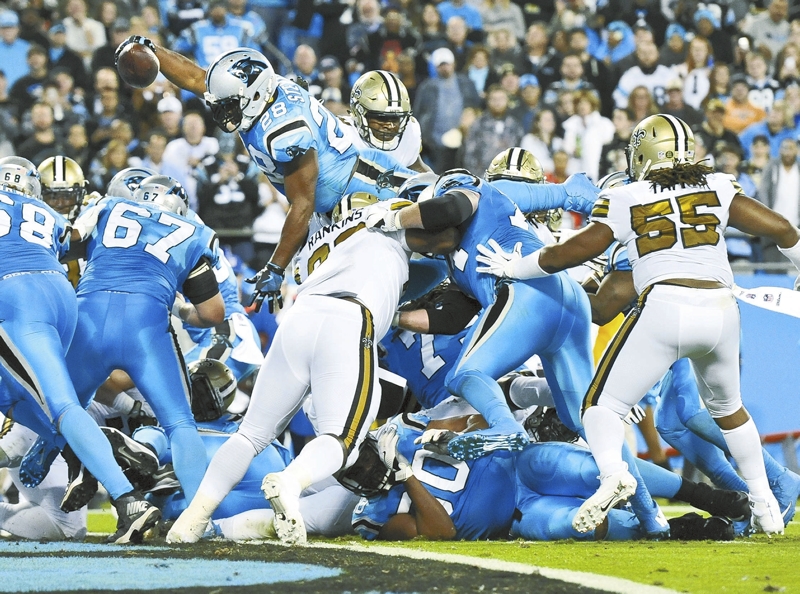 Carolina Panthers' Jonathan Stewart (28) dives over the goal line for a touchdown against the New Orleans Saints in the first half of an NFL football game in Charlotte, N.C., Thursday, Nov. 17, 2016. (AP Photo/Mike McCarn)

CHARLOTTE (AP) — Cam Newton threw for 192 yards and a touchdown and the Carolina Panthers held off New Orleans’ fourth- quarter rally to beat the Saints 23-20 on Thursday night in a game marred by injuries to key players.

Newton was 14 of 33 and threw a 40-yard touchdown pass to Ted Ginn Jr. to help the Panthers (4-6) win for third time in three games and pull even with the Saints for third place in the NFC South.

But the win didn’t come without a cost.

The Saints lost running back Mark Ingram to a concussion in the third quarter.

The Panthers, who surrendered a 17-point lead and lost to the Kansas City Chiefs last week, entered the fourth quarter with a 23-3 lead before injuries set in.

Drew Brees, who was limited to 171 yards and no touchdowns in the first three quarters, rallied the Saints back to within 23-20, connecting on touchdown passes to Brandon Coleman and Coby Fleener.

That was a dramatic difference from the last time the two teams met on Oct. 16 when Brees threw for 465 yards and four touchdowns in a 41-38 win over the Panthers.

LOSE SOME, WIN SOME

Maybe Ginn is just too fast for officials.

In the first quarter Ginn appeared to score on a 14-yard run, but officials reviewed the play and ruled his knee was down at the 1-yard line taking away a touchdown. Then, in the closing seconds of the second quarter, officials ruled Ginn was out of bounds on a pass from Cam Newton. But after instant replay officials overturned the ruling and gave Ginn a 40-yard touchdown catch.

Newton was under heavy pressure for most of the first half, taking a sack on third down that took his team out of field goal range — the second time he has done that in as many weeks.

The Panthers lost punt Andy Lee to a hamstring injury and easily could have lost Gano on Thursday night after Kenny Vaccaro came crashing into Gano’s legs on a 30-yard field goal attempt. Vaccaro was flagged for roughing the kicker, giving the Panthers an automatic first down. But Carolina couldn’t find the end zone and Gano wound up coming back out to kick a 32-yard field goal giving Carolina a 3-0 lead.