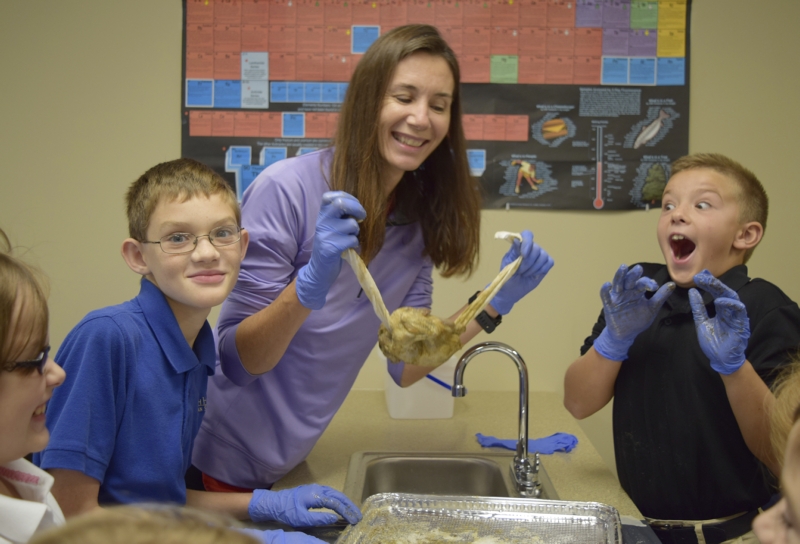 Lisa Wippenbeck, center, plays a prank on Kasey Wippenbeck, right, and Tyler Kepley, left, during a mummification lab. The students have been drying out the birds with a mixture of salt, baking soda, baking powder and spices for several weeks. Rebecca Rider/Salisbury Post.

For the past six weeks, fifth grade science students have been using their weekly lab time to cure, dry out and wrap a Cornish hen. The lab goes hand in hand with the fifth grade’s history curriculum, which includes a study of ancient Egypt.

Teacher Leslie Hunsucker said the lab was the students’ idea. The class studied the importance of the afterlife in Egyptian life and the long process of mummification in all its grisly detail.

“Of course they were all over it,” Hunsucker said.

On the first day, the students were given their hens — purchased at the local grocery store — and gutted them. Each week, the hens were covered inside and out with baking powder, baking soda, salt, cloves and “three shakes” of sage to start the mummification process. At the beginning of each lab, the students would wipe down the birds with a wet paper towel and coat them again.

“We couldn’t wrap a person, so we wrapped a chicken,” student Hunter Gibson said.

Over the weeks, the class has watched the chickens shrink down and shrivel up — something many students say surprised them.

But Tuesday it was time to dress the birds. This time, they got a coating of oil and spices, and were wrapped in cloth bandages that had been dipped in glue.

“It’s definitely going to be a sticky situation,” one parent commented as they stirred the glue mixture.

“You know what I brought for lunch?” She asked, “A wrap!”

Parents and members of the Salisbury Fire Department have been helping students with their birds since the lab began. Battalion Chief Terry Smith said the school invited them out to interact with the students. Some read to younger children, and some, like Smith, helped in the lab. Smith said he thought it sounded interesting.

Smith’s group has affectionately named its chicken “King Henry.” The group nicknamed theirs “King Gut,” a play on famous pharaoh King Tut. Tinsley Merrell, a parent, has been carting around a chicken named Bob for six weeks.

The mummy-to-be had a babysitter each week, and students were charged to put it somewhere where it wouldn’t get eaten.

“That’s the only rule,” Hunsucker said.

After their wrap-up, the mummies were interred in their sarcophagi — clear plastic paint cans.

“They really got into it, so we just went with it,” Hunsucker said of the Egypt unit and the lab, “And what 10-year old does not want to gut and mummify a chicken? I’m just saying.”