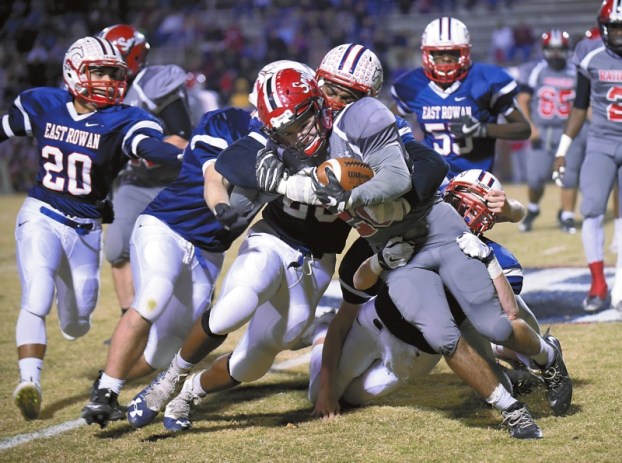 GRANITE QUARRY — A varsity starter as a freshman linebacker, East Rowan’s Christian Bennett has taken another step forward as a sophomore.
Now coach Kenneth McClamrock looks at Bennett as the tone-setter for the Mustangs’ defense.
“He’s the leader, makes all the calls, gets everyone lined up right,” McClamrock said. “He’s a guy we depend on heavily if our defense is going to do good things. He pushes himself hard. By example, as well as vocally, he also pushes his teammates.”
Bennett can run and he’s bigger than he was last season at 6 feet, 220 pounds. His physical presence helps him lead, and he says it’s been that way for a long time.
“I always was bigger than the other kids growing up,” Bennett said. “So I was expected to be that guy who leads. I’ve never minded being vocal if it helps my team win some ballgames.”
There were plenty of glowing reports about Bennett coming out of Erwin Middle School a few years ago. He was piling up rushing yards and touchdowns as well as putting up big numbers in basketball gyms.
East has the school’s all-time rushing leader Max Wall to run the ball, so McClamrock has stationed Bennett on defense. As a freshman, usually playing as an outside linebacker, he responded with 53 tackles, four tackles for loss and seven quarterback hurries.
This season he’s progressed, playing either on the inside or outside. He has 60 tackles, eight tackles for loss, two sacks, four pass breakups, one interception, one fumble return for a touchdown and five caused fumbles.
“I felt the best about the Concord game, and not because I had a touchdown, an interception and two forced fumbles in that game,” Bennett said. “That was the game where our defense really carried out the game plan and did the things we were supposed to do.”
It’s been a strange, roller-coaster defensive season for the Mustangs.
East (4-7) doesn’t have good overall defensive numbers, but the defense has keyed all four wins. In its four victories, East has allowed seven points twice and has two shutouts. In the 8-0 win against Northwest Cabarrus, East’s defense (Wesley Porter) scored the only touchdown. East’s defense (Bennett and Zack Simpson) scored twice in the win over Salisbury.
“Defense was carrying us early in the season when our offense was struggling,” McClamrock said. “Then we finally got the offense going, but that’s when the defense had a rough couple of weeks.”
East allowed 159 points in a three-week stretch against West Rowan, Robinson and Central Cabarrus. Central set records and piled up close to 800 yards.
“We didn’t change a lot of things physically after those rough games,” Bennett said. “But we did get things back together mentally.”
East had its defense clicking in the 47-0 win against South Rowan that closed the regular season. The Mustangs posted their best numbers of the season, allowing just 45 yards. Bennett’s night included two pass breakups.
“In our last game, we had our offense and defense both playing well together,” McClamrock said. “Hopefully, we’re peaking at the right time. We’ll find out Friday because Crest (8-3) has a very strong football team with two Shrine Bowlers, an All-American and a very special athlete at quarterback.”
No one would give East any chance in its game against Crest in Boiling Springs, except that McClamrock’s Mustangs were equally big underdogs two seasons ago and won in historic fashion (50-49) at Morganton Freedom in a No. 2 vs. No. 15 game.
Bennett, as you might expect, is excited about the challenge of going into a football hotbed and playing against one of the state’s best 3A programs.
“I’m excited to be looked at as one our leaders for a playoff game,” Bennett said. “And I’m proud to leading men — not boys.”
The future of East football has brightened considerably in recent weeks with the emergence of sophomore quarterback Justin Smith and receiver Sam Wall as potential stars.
As far as Bennett, he’s been a star for a while.
“He’s just a really impressive kid,” McClamrock said. “For a sophomore to be a leader, that’s impressive.”

By Mike London mike.london@salisburypost.com SPENCER — North Rowan’s rushing production is up 500 yards from last season and the Cavaliers... read more