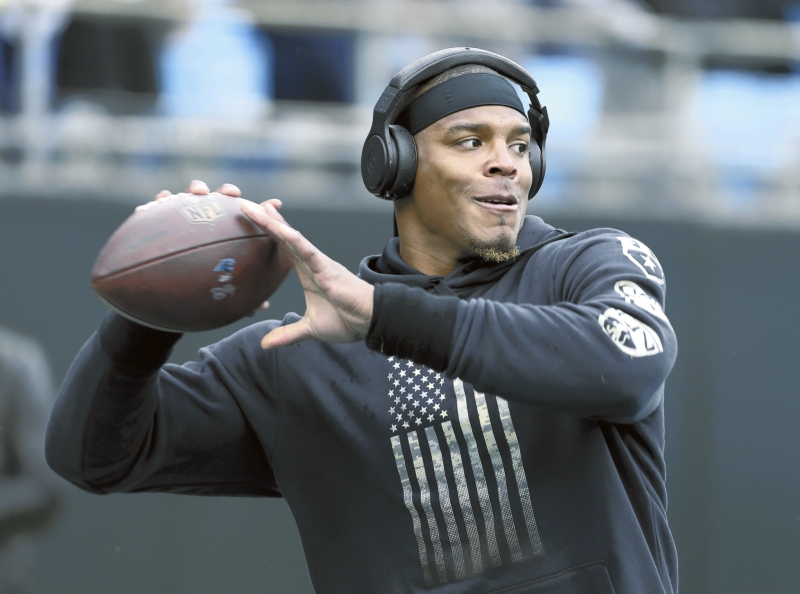 Carolina Panthers' Cam Newton prepares to throw a pass as he warms up before an NFL football game against the Kansas City Chiefs in Charlotte, N.C., Sunday, Nov. 13, 2016. The Chiefs won 20-17. (AP Photo/Bob Leverone)

When the Carolina Panthers last saw New Orleans Saints quarterback Drew Brees he was putting on an indoor aerial show at the Mercedes-Benz Superdome.

Brees threw for 465 yards and four touchdowns in the Saints’ 41-38 victory in Week 6, reducing the Panthers’ young and banged-up cornerbacks to the role of overmatched bystanders.

The Carolina defense has settled down a bit since the first meeting with New Orleans.

The rookie corners have gained four additional weeks of experience, the front four has discovered its pass rush and the Panthers have bottled up the past two quarterbacks they faced.

Of course, those quarterbacks were Case Keenum, who’s been benched (finally) for No. 1 pick Jared Goff in Los Angeles, and Kansas City game-manager Alex Smith.

Brees is a different beast.

And with the season hanging in the balance, the question the Panthers (3-6) must answer is: Will it be a different defensive performance the second go-round against Brees?

“He was able to do what he wanted to do. They had over 500 yards of offense. Those guys just really had a day against our defense,” Davis said. “We take that personally. We feel like the offense put up enough points for us to win the game and we let those guys down.”

In the first meeting Brees picked apart a Panthers secondary that was missing injured cornerback James Bradberry and nickel cornerback Robert McClain, who was also hurt. Leonard Johnson, another nickel, had not yet been activated from the non-football injury list.

Starting at corner vs. New Orleans (4-5) were two of the three rookies — third-round pick Daryl Worley and fifth-rounder Zack Sanchez, who gave up a pair of touchdowns, including an 87-yarder to Brandin Cooks.

While Worley remains a starter alongside Bradberry, Sanchez hasn’t had a defensive snap since the Arizona game on Oct. 30.

“Last time we faced them we were still young. We had players that were just getting their first starts, just rolling in. I think now we have a better feel,” free safety Tre Boston said. “We have guys that are maturing before our eyes, especially our rookies. Those guys are zoning in on their crafts and who they’re becoming in this league. And I think they’re getting more and more confident.”

The corners’ learning curve has been helped by an improved pass rush.

The Panthers only sacked Brees once during the loss in the Superdome. They’ve racked up 15 sacks in the three games since, including eight against Arizona quarterback Carson Palmer.

“I think coming off the bye they’re playing outstanding defense. Their pressure on the quarterback has increased, they’re getting the production there from the rush,” Payton said. “So I certainly recognize when you get young (corners) playing, and yet it’s not just a one-on-one game.”

The Panthers say making Brees uncomfortable in the pocket will be critical. Regardless of the progress made by Bradberry and Worley, Brees getting time to take aim at a pair of rookie corners is a mismatch.

“You can’t let Drew Brees be Drew Brees. That’s a future Hall of Famer right there,” Boston said. “If you let him have all day and you let him toss the rock like he can, he’s going to do it like he can. You can’t allow that.”

Part of that is not allowing quarterbacks time to set their feet in the pocket and throw deep. But Panthers safety Michael Griffin said the defensive backs have also been more disciplined in their assignments.

“The one thing, especially in the secondary, if you don’t let the ball go over your head it gives you a chance to compete and be in these games,” said Griffin, the long-time Titans standout. “The last few weeks since that game, we haven’t had the ball go over our head. We’ve been keeping everything in front of us.”

Brees has thrown a lot of balls over opponents’ heads during his 16-year career.

But statistically he’s not been as effective playing outside the Superdome.

Saints receiver Willie Snead, a former Panthers practice squad player, acknowledged Carolina’s secondary is healthier than it was a month ago. But Snead said there are “plays to be made” for a New Orleans offense ranked first in the league in total yards, passing yards and third-down efficiency.

“We just have to be on the same page as Drew,” Snead said. “If we do that, we’ll be due for another big passing game.”