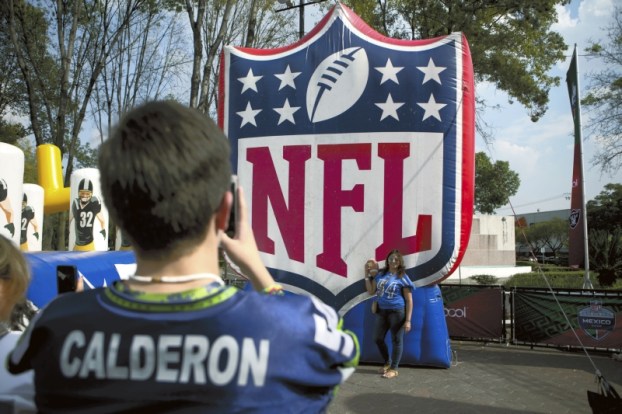 In this Nov. 6, 2016 photo, fans take photos by the NFL logo set up at the third annual American Football Expo in Mexico City. Football, or “futbol Americano,” has a century-old tradition in Mexico and is one of the most popular sports in the country, where millions of fans follow the action on TV every Sunday. (AP Photo/Eduardo Verdugo)

In Mexico, football — or ‘futbol Americano’ — is a passion

MEXICO CITY (AP) — Dressed in their classic silver and black uniforms, the Raiders players huddle before kickoff. After words of encouragement and a prayer, the teenagers finish with head butts, shoulder slaps and a battle cry: “Uno, dos, tres… vamos!”

This is, after all, south of the border, where football has a century-old tradition, rivals soccer in popularity and millions of kids like the “Raiders de Arboleda” play “futbol americano” — American football — every weekend.

The NFL returns to Mexico after an 11-year absence when the Texans face the Raiders in a regular-season game on Nov. 21 in sold-out Azteca Stadium. For the “Mexican” Raiders and others across the country, football is part of Mexican sports tradition as much as soccer, boxing and lucha libre.

“Football gives you the chance to take your passion to the field, to hit people and not get fined,” said Raiders quarterback Gabriel Ayana, 16. “Maybe that’s why it’s so popular.”

The NFL has around 25 million fans in Mexico, the biggest number outside of the U.S., and its base “is still growing,” said Arturo Olive, director of the NFL office in Mexico. The league sponsors 6,500 teams in youth programs in 27 of 32 Mexican states, and estimates 2.5 million kids play flag football in elementary schools.

“Eight years ago, we played in only six states and had 120 teams,” Olive said. “The growth has been exponential.”

In a country steeped in soccer culture, and one that has hosted two FIFA World Cups, the love affair with football might be surprising. But Mexico has two popular college leagues with 36 teams, a six-team professional league, and up to 10 NFL games are on basic cable each week.

The local soccer league has nine games each week, and not all of them are on TV.

Fans can even watch the Thursday and Monday night games at the movie theater. Soccer gets the big-screen treatment only for World Cup matches.

“I also used to play soccer,” Ayana said, “but preferred this sport.”

Football was introduced in the country in 1896 by Mexican students returning home from U.S. colleges. They brought back “an oval shaped ball,” said Alejandro Morales, a local football historian and founder of Mexico’s football hall of fame. He said the first official match was played that year in the city of Jalapa in the Gulf state of Veracruz, where the students and their friends faced a team of American sailors from a U.S. ship anchored in the nearby port.

Soon after, several teams were created in Veracruz and eventually the sport spread to Mexico City and local colleges. UNAM, the national state university with over 200,000 students, started playing in the 1920’s, and by the ‘50s, most of the Mexican colleges weere playing the game that, at the time, rivaled soccer in popularity. UNAM’s famed Estadio Olimpico, site of the 1968 Summer Olympics, was used mainly for football in the first decade after its inauguration in 1950.

“Back then, football used to share the spotlight with soccer,” Morales said. “Eventually that faded, because football was not seen as a business. It was played in college and they just wanted to help the students, while soccer was run by professionals.”

Although football fell behind soccer, it remained hugely popular. The NFL noticed and on Aug. 5, 1978, the Philadelphia Eagles played the New Orleans Saints in a preseason game in Mexico City. Some 30,000 fans packed the home of the Cruz Azul soccer team to watch the Saints’ 14-7 win in the first NFL game south of the border, and only the second played outside of the U.S. or Canada.

The NFL returned 16 years later, when the Houston Oilers played the Dallas Cowboys in Azteca Stadium in the first of six preseason American Bowls hosted by Mexico. The last was in 2001, when the Raiders played the Cowboys in the same venue.

The first regular-season game was played in 2005, when the Arizona Cardinals played the San Francisco 49ers in front of 103,467 fans in Azteca Stadium, then an NFL record. Since 2007, the league has held games annually in Britain — including three each season since 2014 — but never returned to Mexico, until now.

Azteca Stadium, built in 1966 and home to the popular soccer club America, underwent several renovations to meet NFL standards, including new locker rooms exclusive for the football teams, new ramps, and improved communication systems. The size decreased from 100,000 to 84,000 to improve seating, and all tickets were sold out in less than two hours, Olive said.

Most fans will be rooting for the Raiders, the fifth-most popular team in Mexico behind the Steelers, Cowboys, Patriots and 49ers, according to the NFL. Among them will be Anaya and his friends from the Raiders team in Arboleda, a suburb north of this sprawling metropolis.

“A lot of players on the team have been playing here since they were little kids and are Raider fans,” Anaya said, “so they are very excited about the game.”

Seventh title would give Chad Knaus his own spot in history

By Jenna Fryer AP Auto Racing Writer CHARLOTTE (AP) — Chad Knaus will act as if this shot at a... read more