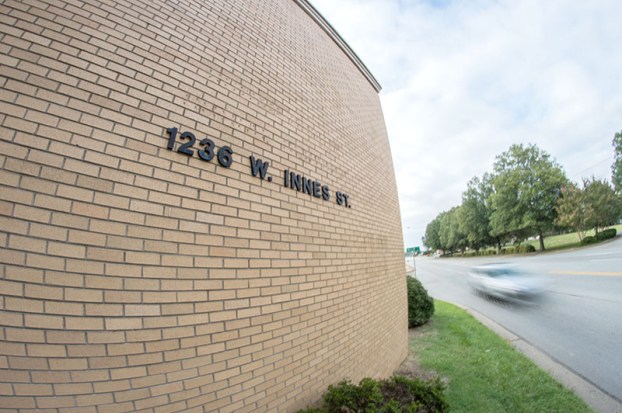 Josh Bergeron / Salisbury Post - A car speeds by a county-owned building on West Innes Street. The building formerly house a division of Social Services and is now for sale.

SALISBURY — With an opening bid of $20,000, prospective buyers have jumped at the chance to buy Rowan County’s abandoned Social Services building on West Innes Street.

For years, Rowan County government has tried to rid itself of a building at 1236 West Innes St. that once housed Social Services and myriad other departments. Some sales fell through. Other ideas for reuse never saw significant interest. The latest effort started after the county purchased the former Salisbury Mall and made plans to move county departments into the space. As a result, the West Innes building and others became surplus property.

Once the West Innes building became surplus, county commissioners lumped it with a couple adjacent parcels of land and put the property on the market.

An in-person auction generated no bids. Mold and mildew also began to grow inside of the large, multi-story building. After more than a year of renewed efforts to sell the facility, county commissioners in July agreed to try demolishing the building. Commissioners decided that an empty patch of land might be more valuable than the old building.

The first offer came on Aug. 17, when NASCAR driver Mike Wallace offered the $20,000 amount. It trigged the “upset bid” process. The process lasts as long as people are willing to make offers.

Wallace has now dropped out of the bidding process.

Mocksville businessman Delmar McDaniel submitted a bid at one point. He also dropped out of the running.

The current high bid $50,000 is from Salisbury resident James Sauls Jr. Multiple other bids have come from Saws Family LLC, a company registered in Woodleaf.

County Clerk Carolyn Barger said she also received a call on Monday from another person interested in bidding on the property. No bid has been submitted from the unknown person.

If no one submits a new by Monday, the bidding process will end with Sauls as the highest offer. County commissioners would then decide whether to accept the offer.