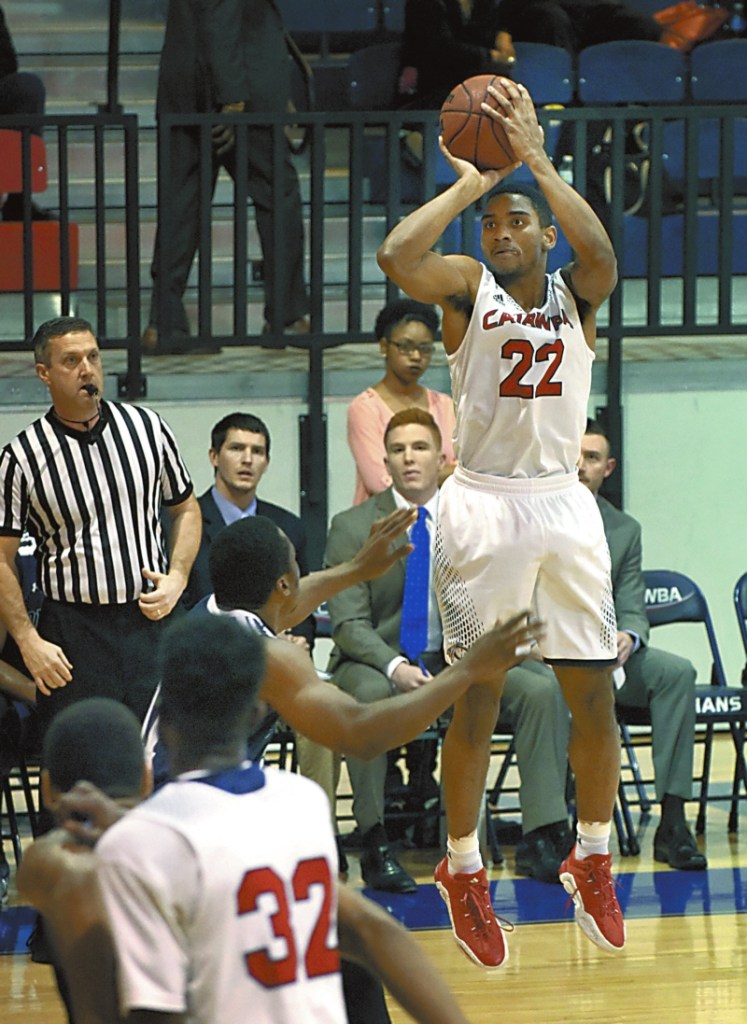 SALISBURY — Lenoir-Rhyne’s Billy Bales forgot to pack his jersey, but he remembered to bring his jump shot.
Bales normally wears No. 2, but he had to wear the unfamiliar No. 20 when he jumped off the bench against Catawba on Wednesday at Goodman Gym.
Bales, who was 6-for-9 on 3-pointers and scored 20 points, got hot when a Catawba victory appeared assured. He shot the Bears back into the South Atlantic Conference contest, and Lenoir-Rhyne eventually beat Catawba, 106-98, in two draining overtimes.
“I’d say Billy Bales has a decision to make,” Lenoir-Rhyne coach Everick Sullivan said. “Does he go back to his old jersey or does he stick with 20?”
Catawba players would just like to stick the bearded Bales, who averaged 7.8 points per game last season, at the bottom of the ocean.
It was a discouraging loss for the Indians, who were one play away from victory several times. They faltered despite 29 points from Jameel Taylor and double-doubles by Jerrin Morrison (20 and 13) and K.J. Arrington (23 and 13). Catawba also got 11 points and some forceful inside play from 6-foot-9 Troy Warren, who fouled out two Bears who tried to contain him.
L-R (2-1, 1-0) got 25 points from dazzling guard Darrion Evans, 19 points, nine rebounds and seven assists from guard Jalen Variste, and 16 rebounds from JacQues Chambers. At 6-foot-5, Chambers often was the biggest Bear on the floor.
“It took a whole lot of different guys playing very hard and never giving up,” said Sullivan, who starred as a player at Louisville and was coaching in his first South Atlantic Conference game. “But that’s who we are. We play hard and we can shoot the basketball.”
The first half was even, but Catawba (2-1, 0-1) controlled the final four minutes and used 3-pointers from Ben Sealey and Morrison to take a 42-36 lead at the break.
Catawba continued to click in the second half, and when Morrison drilled a 3-pointer from deep in the right corner with 7:56 remaining, the Indians’ lead peaked at 14 points. It was 62-48, and L-R was wobbling, ready to be knocked out.
“But then I thought we gave them life,” Catawba coach Rob Perron said. “We switched on an out-of-bounds underneath play, something we didn’t want to do, and they hit a 3. Then we lost a guy in transition and he made a 3.”
Both of those 3-pointers came with L-R hanging by a fingernail, and the crowd getting loud. Bales made both of them, and instead of 62-48, it was 62-54.
At the 6:17 mark, Bales struck again from downtown Salisbury, and it was 66-60.
“That flurry they had, that big swing in a very short time gave them a lot of confidence,” Perron said. “Maybe we relaxed a little bit with the lead. We didn’t keep attacking like we had been earlier. We had a chance to bury them, but we didn’t, and then hit some very timely 3s.”
Lenoir-Rhyne shot an ordinary 13-for-39 on 3-pointers for the game, but in those final minutes of regulation, the Bears couldn’t seem to miss. With 1:15 remaining, L-R guard Reed Lucas found himself wide open for a straightaway 3. He knocked it down, and the Bears’ frantic comeback was complete. They led, 75-74.
Catawba was fortunate to survive regulation. Chambers missed the second of two free throws with the Bears leading 78-76. Then Catawba guard Rakeen Brown was short on a jumper with time running down, but Arrington worked his way into the lane and was in great position for a putback that beat the buzzer.
Catawba made a tremendous play in the first overtime that should have led to victory. When the Bears tried to save an offensive rebound and whipped the ball almost out to midcourt, Morrison soared for the interception and fired the ball ahead of him to a streaking Taylor in the same motion. Taylor carried Bales right to the rim for a physical three-point play, and the Indians led, 87-83, with 1:14 remaining.
But reserve Alex Kelly hit a 3-pointer that saved the Bears.
With 18 seconds left and Catawba leading 89-87, Arrington dished to Warren, who drew a foul. But Warren missed both free throws — long on the first one, short on the second — and the Bears were still breathing.
Evans drove hard, drew a foul from Warren with 6.6 seconds left and calmly made the tying free throws. Taylor missed a 3-pointer for the win, and the exhausted teams headed to the second overtime session.
Variste drove and kicked to Jarvis Calhoun for a 3-pointer for the Bears at the start of the second overtime, and Catawba never got even. Taylor played all 50 minutes, while Morrison and Arrington played 40-plus minutes, and their legs had lost some life by the end.
“Our three best scorers played a lot — I probably should have gotten those guys a blow or two,” Perron said. “We had some fatigue turnovers.”
The killer play was made by Bales. With Catawba down, 96-93, Arrington had secured a defensive rebound on a missed 3-pointer with 2:13 remaining. But as Arrington looked up the floor, Bales swiped the ball cleanly and stuck it in the hoop for a five-point lead.
When Morrison missed a 3-pointer with 18 seconds left and the Indians down by six, Chambers grabbed his 16th rebound, and it was finally over.
“Lenoir-Rhyne played a lot of guys and they played with a lot of energy,” Perron said. “It was an absolute battle, just a typical Catawba-Lenoir-Rhyne game.
“I guess that was my welcome to the SAC game,” Sullivan said with a smile. “Catawba has a strong team. Great road win for us.”