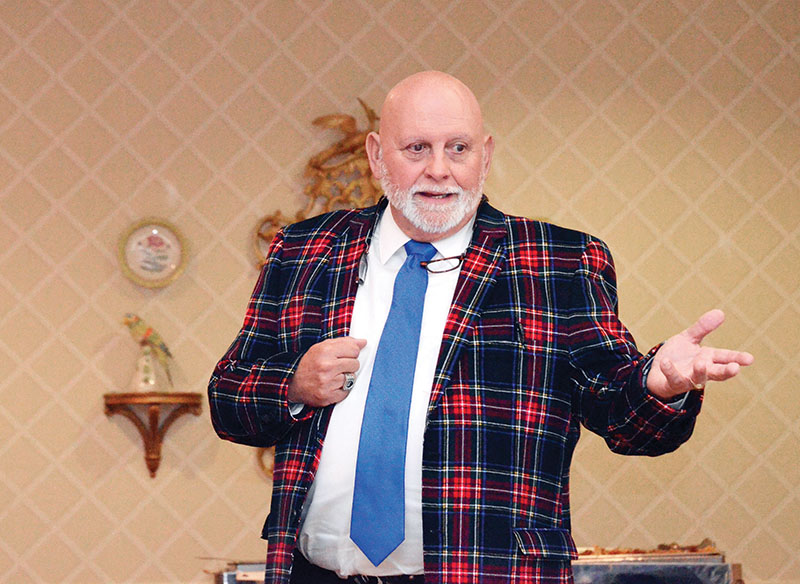 Salisbury attorney Cecil Whitley receives the John B. McMillan Distinguished Service Award presented by the North Carolina State Bar. He was nominated by his peers for his exemplary service to the profession. Whitley has been a longtime mentor for young lawyers. Photo by Shavonne Walker / Salisbury Post.

SALISBURY — Just about every new lawyer has crossed paths with longtime Salisbury attorney Cecil Whitley and has been the better for the encounter. He’s known in the legal profession as a mentor, friend and teacher.

The Union County native, baseball enthusiast, community servant and Vietnam War veteran was the recipient of the North Carolina State bar’s John B. McMillan Distinguished Service Award. The award is given to the person who has demonstrated exemplary service to the profession.

Whitley received the honor Wednesday as he was surrounded by his wife, Nan, daughter, Adrian, and son, Alex, as well as dozens of colleagues and friends.

“He has helped every new lawyer that has come to Rowan County. He is one of the state’s leading authorities on criminal and traffic law,” said District Court Judge James Randolph.

Randolph said he’s known Whitley for 27 years and Whitley has helped him throughout those 27 years.

“Cecil is a testament to how the legal professional should conduct himself,” said Resident Superior Court Judge Anna Mills Wagoner.

“He really is a Rowan County treasure,” Wagoner added.

“His life’s mission is helping people. It’s all about people for him,” said daughter Adrian Whitley Gantt.

Alex Whitley, who traveled from Alabama to be with his father, said growing up watching his father he realized it was never about what side of the tracks someone lived on. It was about their heart.

The family, especially Cecil and wife, Nan, have been longtime supporters of Catawba College, its baseball and softball teams and various athletic projects.

“It couldn’t have happened to a nicer man. He has always stood for the rule of law and has been the standard bearer for our profession,” said John L. Holshouser, a former senior resident superior court judge and currently an attorney with Kluttz, Reamer, Hayes, Adkins & Carter.

“He’s a guy that’s been devoted to his clients,” Kenerly said.

He said Whitley’s word has always been his bond.

Current District Attorney Brandy Cook said Whitley gives a lot to the community and to the legal system. He particularly gives back to new attorneys through his mentorship.

After receiving his award, Whitley shared a few life lessons with those gathered, particularly about mentoring incoming attorneys.

“We need to help each other to make the profession better,” he said.

He suggested the state bar institute a mentoring program for young, new lawyers. If established one day, the program would only serve as a testament to what he’s done his whole career.

The award is the highest and only award given by the state bar. Whitley is only the second Rowan County resident to receive this award, behind retired District Attorney Bill Kenerly.

He served in the U.S. Army as a first lieutenant and in active combat on the front lines during the Vietnam War. He provides pro bono legal services to veterans in the community.

It was following his time in the war that he vowed to his wife, Nan, that he would make a valuable contribution to the community.

He has given of his time and financial support to local causes including “Ask a Lawyer Day” as well as partnering with Chief District Court Judge Charlie Brown to educate underage drivers during prom season on the consequences of driving while impaired.

He often consults with clients late into the evening because they couldn’t afford to take the day off from work to meet with him during business hours.

In a nomination letter, one person wrote, “Cecil leads the way for us all. He goes above and beyond the call of duty by seizing opportunities to not only improve the administration of justice, but also to promote the best interest of the citizens of this community.”

Another person wrote, “As a new attorney, in a new town, I was very intimidated and unsure of myself. In this sea of uncertainty was this white-haired, smiling face — a beacon; a man with an incredible reputation, a vast knowledge of the law and a great attitude and he welcomed me like no other.”