Somber Romo: Prescott has earned right to be Cowboys’ QB 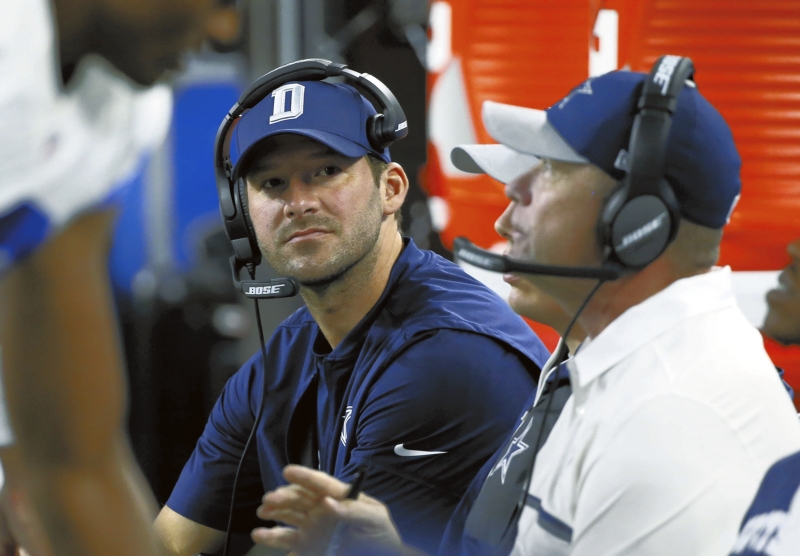 FILE - In this Oct. 30, 2016, file photo, Dallas Cowboys quarterback Tony Romo talks with coaches on the bench during an NFL football game against the Philadelphia Eagles in Arlington, Texas. Romo is running the scout team in practice even though Dallas' starting quarterback the past 10 years looks ready to return from a back injury.(AP Photo/Michael Ainsworth, File)

FRISCO, Texas (AP) — Tony Romo stopped a reporter in the middle of what appeared to be the first question in his first meeting with the media since August.

The Dallas quarterback brought a statement, and he wasn’t going to answer any questions Tuesday.

The 36-year-old coming off his fourth back injury in less than four years conceded the starting job to Dak Prescott, who has led the Cowboys (8-1) to a franchise season record-tying eight straight wins and the best record in the NFL.

And a somber Romo didn’t hide his disappointment while reading the five-minute statement.

“He’s earned the right to be our quarterback,” Romo said of the 23-year-old rookie. “As hard as that is for me to say, he’s earned that right. He’s guided our team to an 8-1 record and that’s hard to do.”

Romo, who broke a bone in his back in a preseason game, is expected to be Prescott’s backup Sunday at home against Baltimore (5-4). It should be the first time Romo is active since Thanksgiving last year, and the first time in 10 years he isn’t the Dallas starter.

“If you think for a second that I don’t want to be out there, then you probably never felt the pure ecstasy of competing and winning,” Romo said. “That hasn’t left me. In fact, it may burn now more than ever.”

Romo was surprisingly reflective as well, recalling the early days of his career when he was an unheralded free agent fighting to stay on the roster. Now he’s the franchise leader in passing yards and touchdowns, ahead of Super Bowl winners Roger Staubach and Troy Aikman.

But he’s also in the same place Drew Bledsoe was in 2006 when Romo replaced an ineffective Bledsoe at halftime of a loss to the New York Giants six games into the season and never gave up the starting job.

“I remember the feeling like it was yesterday,” Romo said. “It really is an incredible time in your life. And if I remember one thing from back then, it’s the people that helped me along when I was young. And if I can be that to Dak, I tried to be and I will be going forward.”

Romo signed the first $100 million contract in franchise history in 2013 and counts $20.8 million against the salary cap this season. The cap hit next year is nearly $25 million, but the Cowboys can reduce it by roughly $5 million if they release him.

The mood was more jovial earlier in the day when owner and general manager Jerry Jones made one of his weekly radio appearances.

The Cowboys went 1-11 in the 12 games Romo missed last season with a twice-broken left collarbone. When he immediately grabbed his back after getting tackled awkwardly from behind in the preseason against Seattle, Dallas’ hopes seemed doomed again.

But Prescott had already shown promise in the preseason. And after a one-point loss to the New York Giants in the opener, he has led fourth-quarter comebacks and easy victories alike while compiling the fourth-best passer rating (106.2) with 14 touchdowns and just two interceptions.

“We all know something magical is happening to our team,” Romo said. “I’m not going to allow this situation to negatively affect Dak or this football team by becoming a constant distraction. I think Dak knows that I have his back. And I think I know that he has mine.”

After Romo went down in Seattle, the initial word was that his surgically repaired back had withstood the hit. But the broken bone was diagnosed the next day, with an initial timeframe of six to 10 weeks to recover.

“Getting hurt when you feel like you have the best team you’ve ever had was a soul-crushing moment for me,” Romo said. “You almost feel like an outsider. Coaches are sympathetic, but they still have to coach. And you’re not there. It’s a dark place, probably the darkest it’s ever been.”

Part of the darkness came from Romo realizing where he is in his career.

“Seasons are fleeting,” he said in a speech with several pauses. “Games become more precious. Chances for success diminish. Your potential successor has arrived, injured two years in a row and now in the mid-30s, the press is whispering, everyone has doubts, you’ve spent your career working to get here.”

And now Romo’s a backup again.