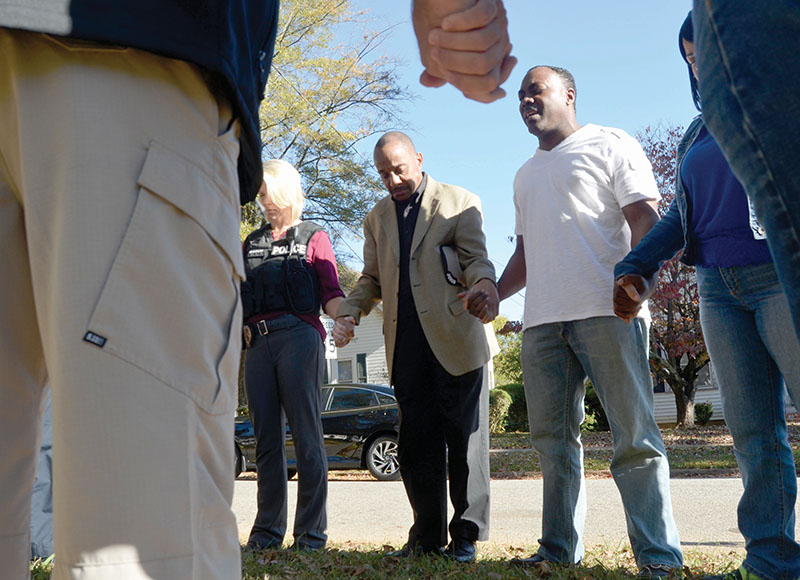 SALISBURY — Should the city of Salisbury bar law enforcement from using no-knock warrants?

That was one option Mayor Karen Alexander brought up Tuesday in response to concerns about the killing of Ferguson Laurent on Nov. 3.

Several people who spoke during the public comment period of Tuesday’s City Council meeting questioned the use of a warrant that allowed officers to burst into Laurent’s home.

Alexander asked the city attorney, Rivers Lawther, if the council had any authority over no-knock warrants.

Lawther said the no-knock policy is a tactical decision of the police department and they are held accountable for the execution of the warrant.

He also said that, though it is not usually what councils do, the council can direct the city manager to tell the police chief that the city does not allow no-knock warrants.

Councilman Kenny Hardin said he would like the council to revisit the subject in the near future.

“I think it needs to get all the attention and the due diligence that we have put on parade routes and other things. I would like for us to make sure that it’s in the minutes that we will revisit this,” he said to applause. Alexander agreed.

Nine people spoke about the shooting that led to the death of Laurent, a 22-year-old African American, after he shot at officers and they fired back.

DeAndre Thompson said as a life-long resident of Salisbury, graduate of Livingstone College and member of Livingstone’s alumni board, he believed there was an inclusion problem in the city.

“As a current resident, some of the events I heard here tonight, I’ve never heard about before,” he said.

Thompson said with all that is going on around the country, now is the time to make sure everyone is included in planning processes.

Ashley Love said she attended a vigil for Laurent and saw a disconnect between the community and the police department.

“The no-knock warrants … should not give anyone a pass to enter into someone’s home unannounced,” she said.

She asked that the council research how no-knock warrants impact minority communities.

Whitney Peckman said it could be a child, grandmother or police officer who is killed when the next no-knock search is done.

“In a state where you have open carry and you have people that can have guns in their houses and everybody’s got a gun, what do you think is going to happen when somebody barges through your door?” Peckman asked.

Delilah Thomas said she found it upsetting that the council was spending time talking about dog parks and permits when children are afraid to step outside of their front doors.

“If a dog park was the only thing I had to worry about, it would be a great day for me and my children,” she said.

She said in her neighborhood, residents think someone is going to rob or kill them when people barge through their front doors.

“When the police can come in, or anybody for that matter can come in, and not introduce themselves or let you know who they are, you feel like you or your family is being put in harm’s way,” she said, “and if there’s any way to protect yourselves, you’re going to want to do it.”

After the public comment period, Councilman Brian Miller asked when the investigation being conducted by the State Bureau of Investigation will be complete.

Salisbury Police Chief Jerry Stokes said, based on his experience, most of their investigation is probably done and they are just waiting on results of the autopsy.

“That usually takes a considerable amount of time when you talk about blood test results and so forth of the deceased. They, like everyone else, have limited resources and have to prioritize,” Stokes said.

• Recognized Salisbury Fire Department personnel who earned Medical Lifesaving Commendations for 2016 and assisted with the aftermath of Hurricane Matthew.

• Approved the consent agenda, which included:

— The adoption of a $5,000 budget ordinance amendment to the fiscal year 2016-17 budget to appropriate funds from the sale of fire department assets.

• Appointed a council committee to further discuss and examine the proposed changes to the special events ordinance. Several people spoke at a public hearing on the proposal. See Thursday’s Post for more details.

• Did not approve Forest Hills Park as a location for a dog park. Mayor Alexander, Mayor Pro tem Blackwell and council member Post voted against the motion.

• Heard comments from the city manager, including the notification that the city is moving forward with the purchase of self-contained breathing apparatus for the fire department.