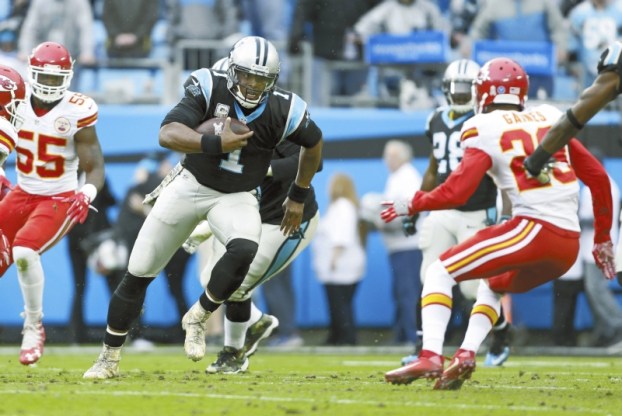 The reigning Most Valuable Player said Tuesday he has no idea if the NFL’s sinking TV ratings early this season are tied to the league’s crackdown on celebrations, but the man who made “the dab” famous agrees with others players that they should be allowed to express themselves.

“The league has to understand it’s entertaining to see that,” Newton said.

Newton, whose Panthers host the New Orleans Saints on Thursday night, said he tuned into Monday night’s game to see how New York Giants wide receiver Odell Beckham Jr. would celebrate if he scored a touchdown. Beckham didn’t disappoint, doing his best impersonation of Michael Jackson’s “Thriller” dance, prompting a giddy Newton to imitate Beckham’s dance from behind the podium.

Beckham wasn’t flagged for excessive celebration, but some players have been this season.

“If it was up to me, there would be no type of….” Newton said, before breaking into a wide smile. “You’re asking a person who celebrates. But it’s fun. It’s like when a person gets a sack, I try not to look to see what they do, but it’s all in the game.”

Newton grew up in Atlanta watching Deion Sanders high-step into the end zone and still remembers wanting to wear a bandanna like the old Miami Dolphins so he could look cool.

Given how hard NFL players work leading up to games — “we’re here until 10 at night and back in at 6 a.m.,” he said — they deserve to let loose when a play goes as planned.

“All of that bottled up inside of you and being able to do exactly what you planned and foresaw yourself doing, you are owed something,” Newton said. “Some people let it out with a celebration. Some people let it out in different way. It’s a give and take thing. But it’s kind of reciprocated feeling when a fan goes to see their favorite player and sees them celebrating.”

Newton said people stop him all of the time out when he’s out in public and want to talk about his first down celebrations or doing the “dab” after a touchdown — mostly stuff that doesn’t involve actual plays on the field.

“The little nuances of the game, people can’t get enough of,” Newton said. “I know I can’t.”

With the skidding Vikings desperate to save their season, they simply couldn’t wait for Walsh to pull himself out of another rut. Minnesota cut Walsh on Tuesday, two days after he missed his league-leading fourth extra point in a 26-20 loss to Washington.

For a team that started 5-0 but has gone 0-4 since and is constructed to play close games, Walsh’s inconsistency could no longer be tolerated.

After he missed an extra point, had a field goal blocked and misplaced a kickoff in a loss to Detroit two weeks ago, the Vikings brought in six kickers for a tryout. They ultimately decided to give Walsh one more chance, but his miss just before halftime against the Redskins sealed his fate. Walsh was in the first year of a four-year, $13 million extension he signed last season , undoubtedly one reason why the Vikings stayed as patient as they could with him.

The Vikings reached agreement on a contract with Kai Forbath to take Walsh’s place, two people with knowledge of the situation told The Associated Press. The people spoke on condition of anonymity because an official announcement has not been made. USA Today first reported the move to Forbath, who made 34 of 35 extra points and 10 of 15 field goals last season while kicking for Washington and New Orleans.

With Forbath, punter/holder Jeff Locke and long snapper Kevin McDermott, all three of Minnesota’s specialists will be UCLA products. The 29-year-old Forbath is 69 for 82 for 84.1 percent in his NFL career on field goals and 124 for 127 for 97.6 percent on extra points.

Walsh was an erratic kicker at Georgia when Vikings special teams coordinator Mike Priefer started to scout him. The coach said Walsh had the best performance at the combine he had ever seen from a kicker leading up to the draft in 2012, and the Vikings selected him in the sixth round before releasing reliable veteran Ryan Longwell. After working on some tweaks to his approach with Priefer, Walsh set a Vikings rookie record with 141 points and established an all-time NFL mark by going 10 for 10 from 50 yards or longer.

Walsh bounced back to make an NFL-high 34 field goals last season, but he missed four extra points and shanked a 27-yard field goal in the closing seconds of Minnesota’s 10-9 loss in the playoffs to Seattle. Despite Walsh’s public expressions of confidence in his ability since then, even after his rough game against the Lions, he clearly hasn’t recovered yet mentally from the crushing miss against the Seahawks that left him sobbing in front of his cubicle in the locker room afterward.

One of the few roles in sports without any gray area between success and failure, where sending the ball through the uprights is the only responsibility and the only outcome worth judging, being a kicker in the NFL can be a pressure cooker. At least in his interaction with reporters, Walsh has been more guarded and on edge than any other season with the Vikings.

For the Vikings, the setbacks to a season that began with Super Bowl aspirations haven’t stopped. Neither have their aggressive attempts to stay on track, even if the move away from Walsh might’ve come a little late. Walsh will still count more than $1 million against the team’s salary cap in each of the next two years.

They parted with two high draft picks, including their first-rounder in 2017, to bring in Sam Bradford after quarterback Teddy Bridgewater was lost to a massive injury. They took a flier on injury-waylaid former No. 1 overall draft pick Jake Long, who lasted four games before tearing an Achilles tendon and needing season-ending surgery. Offensive coordinator Norv Turner resigned two weeks ago amid philosophical differences about the scheme with Zimmer, even expressing belief in subsequent interviews that his removal from the strategical process could help the team get going.