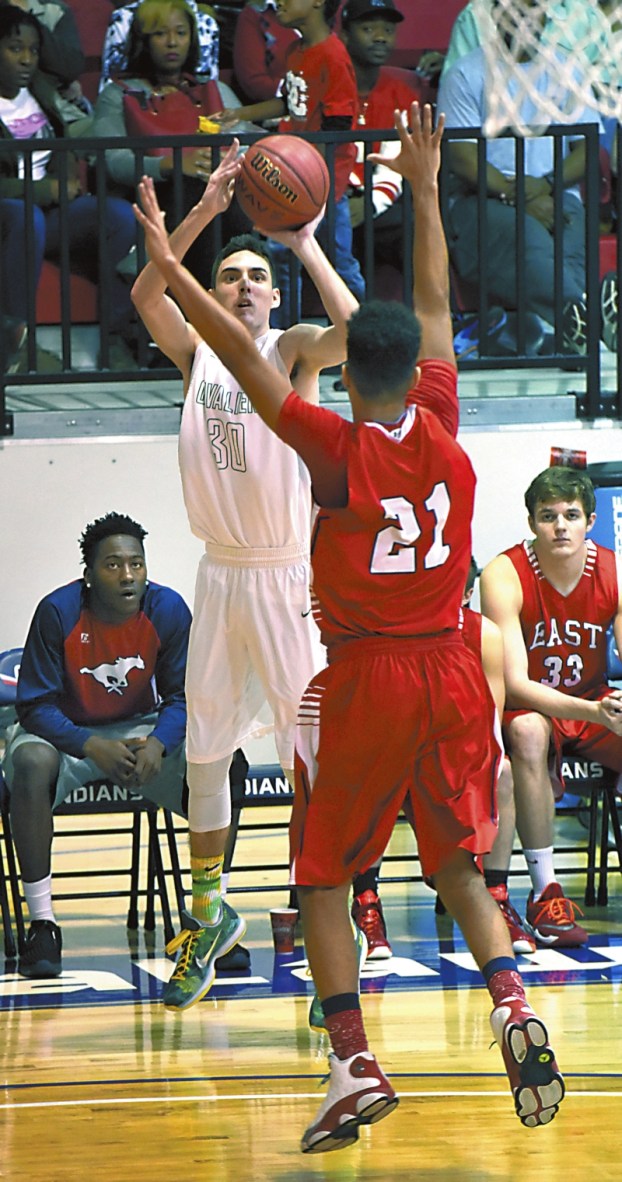 LANDIS — It’s a mostly new North Rowan boys basketball team, but the two most familiar faces — Joseph Scott and Henderson Lentz — helped the Cavaliers open with a victory at South Rowan.
Scott had a flurry of offensive boards and free throws to get North started. Then Lentz finished off the Raiders from the 3-point line. North won, 57-38, on Tuesday.
“We know we’re not the offensive team that we’ve been,” North coach Andrew Mitchell said. “But if we rebound and play tough defense we still can be a good team. Our goal is to hold the team under 40, and we did that tonight.”
South played well in the middle two quarters for second-year coach Andre McCain and got 19 points from Carson transfer Bailey Graham.
But South still hasn’t beaten the Cavaliers since a 58-56 victory in the 2006 Sam Moir Christmas Classic.
North has added a couple of talented transfers, quick guard Malon Herron-Cuthbertson, who had some big games at Carson, and forward Brevin Goodlett, who showed lots of promise at East Rowan last season as a varsity freshman.
“I’m very pleased,” said North coach Andrew Mitchell, who began his sixth season at the helm and recorded his 120th victory. “We didn’t know what to expect with so many new faces, but we stayed together and we played well.”
North’s tenacity on the boards and the resulting second-chance points were the difference in the game, and that was the most disappointing aspect of the contest for McCain.
“It’s one thing to get out-rebounded when you’re undersized, but we weren’t undersized tonight,” McCain said. “North is good and North is athletic, but rebounding is mostly want-to. We’ve got to rebound the basketball better.”
The Cavaliers jumped on South early and went up 12-0 when Goodlett worked the offensive glass for two points.
Graham hit two 3-pointers to get the Raiders on the board, but North led after a quarter, 20-7.
South played on even terms with the Cavaliers in the second quarter, and the Cavaliers needed a 3-pointer late in the first half from Joe Harrison to take a 31-19 lead to the break.
When Graham opened the third quarter by knocking down consecutive jumpers, it was an eight-point game, but that’s when the Cavaliers looked to Lentz to take over, and the sweet-shooting 6-foot-3 lefty delivered.
“Lentz can shoot,” McCain said with a sigh. “That’s the thing we emphasized as far as the scouting report. We had a chance there to really get close, but he made big shots.”
North worked to get Lentz a straight-on 3-pointer to push the lead back to 11 points.
When Lentz nailed a 3-pointer from deep in the right corner it was 39-25, and a Lentz pull-up increased North’s lead to 41-26.
“That’s a guy his parents had to run out of the gym every day when he was 4 or 5 years old,” Mitchell said about Lentz. “And we still have to run him out of the gym every day. That’s why he has a chance to have a great season.”
Scott and Mitchell got technical fouls back-to-back late in the third quarter. That’s when Graham made four free throws to cut North’s lead to 42-30. Mitchell received a technical when he politely asked for an explanation of Scott’s technical.
But Quintous Smith scored inside for North, and Herron-Cuthbertson scored twice on drives to quickly push the lead back to 49-30.
When Lentz made his most impressive shot of the evening — a step-back 3-pointer after he created space with a quick head fake — the Cavaliers led by 22 with 5:11 remaining.
“We can shoot a lot better and we can shoot free throws better and we need to do a lot of things better than we did,” Mitchell said. “But it’s the first game. This was a good start.”
North is going to be stronger after football season ends. Mitchell said Alonzo Sirleaf, Josh Ellis, Dalynn Cuthbertson and Chaz McCombs are expected to join the basketball team.
“That’s going to leave us with some tough decisions,” Mitchell said. “But it’s better to have too many good players than not enough.”

College Basketball: Catawba’s Taylor has pushed himself to stardom

SALISBURY — Division I schools liked Jameel Taylor, but none of them loved him enough to offer a scholarship. Catawba... read more