No. 1 Duke falls to Kansas 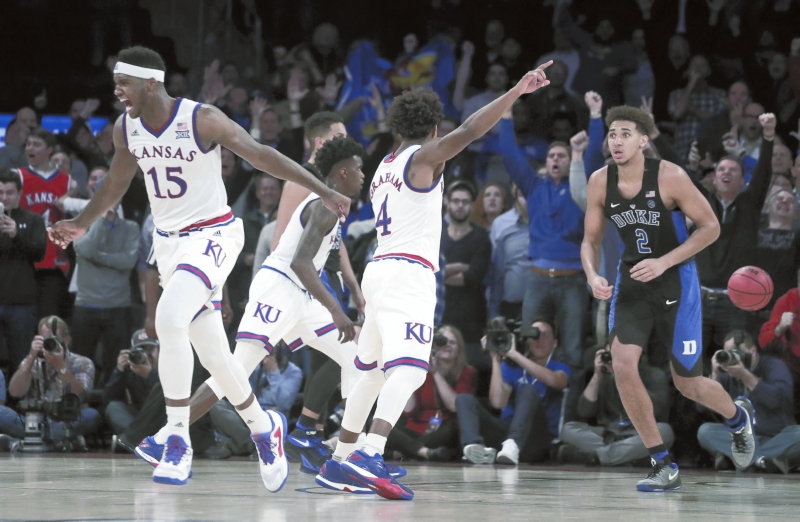 NEW YORK (AP) — Frank Mason III hit a short jumper with 1.3 seconds to play to give No. 7 Kansas a 77-75 victory over No. 1 Duke on Tuesday night in the State Farm Champions Classic.

The Jayhawks (1-1) beat a top-ranked team for the eighth time and this one looked a lot easier with 8 minutes to play and Kansas leading 62-50.

But the Blue Devils (2-1), despite a terrible shooting game by Grayson Allen, the leading vote-getter on The Associated Press’ preseason All-America team, managed to suddenly start hitting shots and they tied the game at 75 with 15 seconds left on a 3-pointer by Frank Jackson.

Kansas called a timeout with 8.2 seconds left and set up the game-winner.

Duke: In its first two games the Blue Devils held opponents to 55.0 points on 32.3 percent shooting, including 16.2 percent from 3-point range while forcing an average of 17 turnovers. … This was the 950th consecutive game the Blue Devils made at least one 3-pointer. That’s the fourth-longest stretch in Division I history. … Duke played again without freshmen Harry Giles and Jayson Tatum who coach Mike Krzyzewski has said will brought along slowly as they rehab from injuries.

Duke: The Blue Devils stay in the Northeast heading to the Naismith Memorial Basketball Hall of Fame Tip-Off at Uncasville, Connecticut on Friday and Saturday. They open with Penn State.

Kansas: The Jayhawks finally get to play in Allen Fieldhouse when they play Siena on Friday.