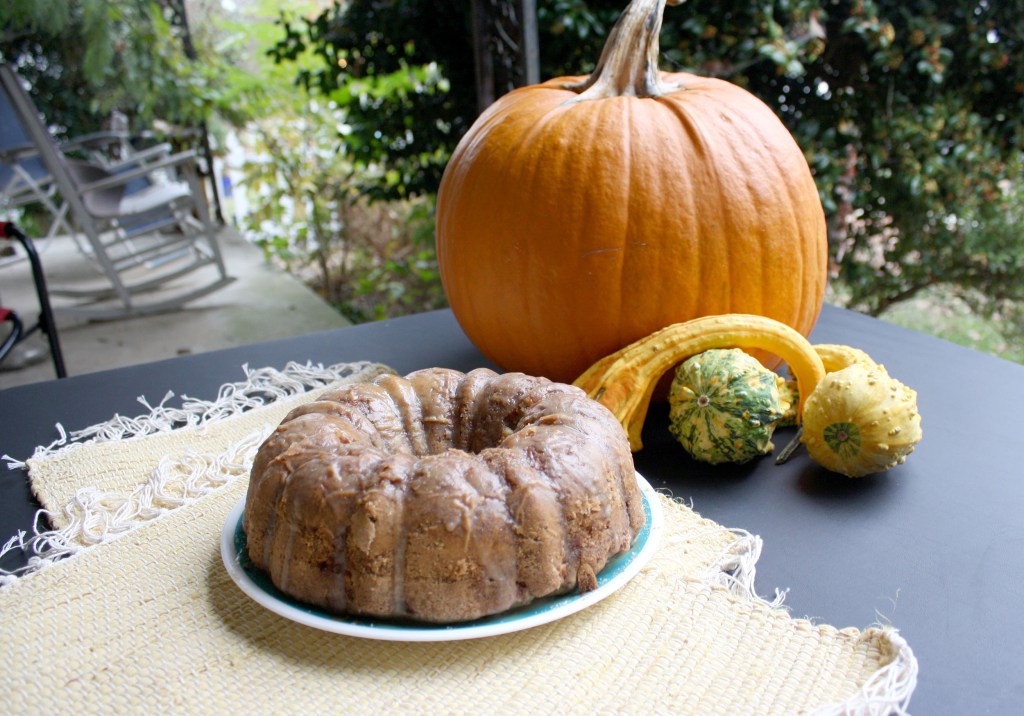 Stephen Smith/For the Salisbury Post This Apple Dapple Cake would be a lovely dessert to take to aThanksgiving dinner or share around an autumn fire.

A sudden, flashing moment … a sound … a smell … a taste can detour your thoughts to begin a journey down that amazing Memory Lane.

This side road, when traveling alone, may not be quite as long, but with an old friend, it can stretch on for as long as you can remember.

Recently, I saw an old friend and before we knew it, we were on a journey. Murl Leazer and I were members of the last graduating class from China Grove High School.

I remembered that Murl, even in high school, worked part-time for the A&P grocery store and eventually became the full-time produce manager. Murl worked at the stores in China Grove, Salisbury and Spencer from 1957 until 1978 and has so many interesting tales to tell and facts about produce from his 21 years with A&P.

Murl asked, “Did you know a bell pepper that has four or more bumps is a female but a male has only three bumps? The female has the best flavor. And, did you know that an ear of corn has an even number of kernels on each row of the cob?” Guess he discovered this while working among the vegetables.

We also talked about the Woman’s Day Magazine that A&P published in 1937. And do you remember those S&H (Sperry & Hutchinson) Green Stamps that they gave out to entice customers to come in? Fill up the book, take to an S&H Green Stamp store and exchange them for items offered in a catalog. I remember Mother getting a set of dishes after saving for many months.

And do you remember the singer, Kate Smith, who was considered the First Lady of Radio? Well, I don’t remember the radio part but I do remember she had a television show that came on before or after the Ed Sullivan show. Not only was Kate the first person to sing Irving Berlin’s “God Bless America,” she was a popular spokesperson for A&P grocery stores and products. Oh. For a special treat and some patriotic goose bumps, Google Kate Smith. You can hear her sing the song.

The A&P (Atlantic & Pacific Tea Company) was founded by George Gilman in 1859 in New York City as a tea and coffee company but quickly became a leader in the grocery store industry. By the 1930s there were 16,000 A&P stores across the country — stores that made your mouth water just walking through the front door, smelling the freshly ground Eight O’clock coffee. You remember, the one in the shiny red package. The Jane Parker pies and cakes. And my favorite, that wonderful, spicy, Spanish Bar Cake.

Even though my mother baked the most delicious cakes ever, that Spanish Bar Cake was a favorite of mine. So after talking with Murl, I started looking for recipes that reminded me of the cake from down that memory lane. Hope you’ll try this recipe and see if it sparks your gray matter.

Place raisins in 2 cups of very hot water. Let sit while you prepare the batter.

In a medium bowl combine the first 8 ingredients.

Add one third of the flour mixture to the wet ingredients and mix well. Then repeat until all the dried ingredients are used. The batter will be fairly thick.

Drain the raisins and fold gently into the batter.

Evenly distribute the batter into the prepared pan, working from the center spreading to the corners.

Bake 30-35 minutes or until it tests done. Remove from the oven, place on a wire rack to cool completely before adding the frosting.

Use a hand mixer on low speed to cream the butter then add sugar and a few tablespoons of milk, a little at a time. May take additional milk to reach spreading consistency. Add vanilla. Frosting should be on the thick side.

If making two layers from the sheet cake, cut the cake in half, then spread a good amount of the frosting in between layers (stacking one half on top of the other). Then frost the top of the cake.

Another cake I baked recently that uses some of my favorite ingredients — apples, pecans and cinnamon, that I would like to pass along to you and is great with or without the glaze. Can easily be packed into lunch boxes (without the glaze) or taken to a family gathering. I served it at a fall cookout along with warm soups and cornbread.

This recipe came from a cherished cookbook, Lebanon Lutheran Church Women, Cleveland, given to me in 1978. Thank you, ladies.

In a large bowl, beat first 3 ingredients at medium speed with an electric mixer until creamy.

Add vanilla. Stir in apples and pecans. Batter will be very thick.

Spoon batter into a greased and floured Bundt or tube pan.

Bake at 350 degrees for 1 hour or until wooden pick inserted in center comes out clean. (I checked the cake after 50 minutes baking. It was perfect.) Cool in pan for 10 minutes. If desired, drizzle Brown Sugar Glaze over the warm cake.

Combine all ingredients in a small saucepan. Cook over high heat, stirring constantly 2 minutes or until butter melts. Cool to lukewarm. Drizzle over cake.

How to get out of the slavery of debt