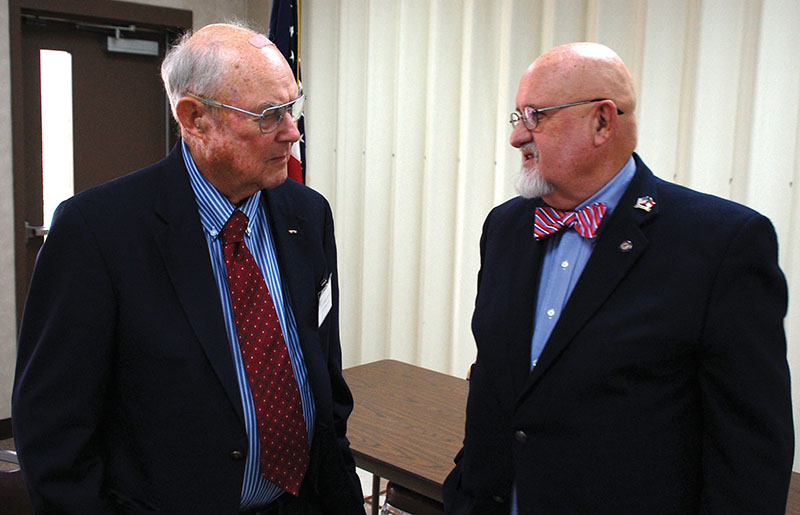 SALISBURY — Retired Brig. Gen. Harold Earnhardt meant to share his insights Monday on the formation, growth and needs of the U.S. Air Force since World War II, but once he recounted some stories and inspirational thoughts on the value of men and women who serve the country’s military, his time ran out.

“Suffice it to say,” Earnhardt said, winding up his remarks to the Central Carolina Chapter of the Military Officers Association of America, “the military is an expensive operation, and we’re certainly falling behind. We’re not getting the equipment.”

Earnhardt did leave his audience with handouts detailing some of the Air Force’s needs and how over many years and administrations it has been shortchanged in manpower and equipment.

One example Earnhardt cited was a pilot shortage, which he described as “back with a vengeance.” At the end of fiscal year 2015, the Air Force was short 511 fighter pilots.

On the need for fighter planes, Earnhardt said, “Don’t tell Russia or China, but in six years we will not have enough fighters for a major war.”

It was sobering news to a roomful of retired military officers. This Central Carolina Chapter, which meets at the Rufty-Holmes Senior Center, has a membership of about 65 men and women, including Earnhardt himself.

“What can we afford as a nation?” asked Chapter President Mark Beymer, a retired captain of the U.S. Marine Corps. “Well, we can’t afford to be weak.”

Earnhardt noted how Congress, for the eighth consecutive year, has passed a continuing resolution to keep the government operating while not providing for, in many people’s estimation, an adequate defense budget.

U.S. Sens. John McCain, R-Ariz., and Lindsey Graham, R-S.C., have acknowledged Congress is to blame and that inadequate defense spending poses the biggest threat to the U.S. military today.

No enemy will ground as many planes or sink as many ships as the U.S. budget policy, Earnhardt said, quoting the senators, who are members of the Senate Armed Services Committee.

Earnhardt is a graduate of Rockwell High School and Duke University who became a command and instructor pilot, flight leader and aircraft commander. He served in the Air Force for three years and with the Air National Guard for almost 30 years, retiring in 1988.

He is a Vietnam veteran.

Before retirement, he rose in the ranks to become commander and chief of staff of the N.C. Air National Guard.

From his many trips to Panama — the Air National Guard used that country as its southern base of command for Latin and South America — Earnhardt met the former Panamanian dictator Gen. Manuel Noriega twice.

In civilian life, he was mayor of Rockwell for 10 years besides holding positions on several community boards, among them Novant Health Rowan Medical Center and Nazareth Children’s Home.

But speaking to a fellow group of officers was intimidating, Earnhardt said Monday.

“I don’t think I ever felt this much pressure, even in combat,” he said.

As a kid, Earnhardt recalled, he would go to church on Sundays during World War II and see the soldiers in uniform who were home on leave.

“You’ve always been my heroes,” Earnhardt told the World War II veterans in the room.

He recounted instances during those World War II years when he witnessed neighbors receiving news of sons lost in the fighting.

As an Air Force pilot after the war, Earnhardt recalled flying a C-130 into Berlin and spending some time at Checkpoint Charlie, where he went to the command post and conversed 30 minutes with a Russian major.

They talked mostly about their families. Each officer had three children. “We had an amazing conversation,” Earnhardt said. “It was like talking to someone in here.”

And yet, they also were on opposite sides of the Cold War — men who could easily be enemies out to destroy each other some day. That half-hour demonstrated to Earnhardt the importance of communication.

“Somehow we got to prevent war,” he said.

Beymer and the Central Carolina Chapter marked Monday the passing of member and past president Carrol J.W. Fisher, a Naval fighter pilot in World War II who flew missions off the USS Roosevelt aircraft carrier.

Fisher flew as a pilot in the reserve for 20 more years after the war, rising to the rank of lieutenant commander. His memorial service was held late Monday morning at Sacred Heart Catholic Church.

Ty Cobb updated the officers association on efforts to raise money for its Veterans Christmas Fund and also donated items for the VA’s homeless veterans program.

The Christmas Fund is “for military families who are having a tough go,” Cobb said.

As for the homeless vets, Cobb said there is a need for sweatshirts, and he urged the officers to bring a new sweatshirt with them to the next meeting as a VA contribution. There also is a need for women’s deodorant, Cobb reported.