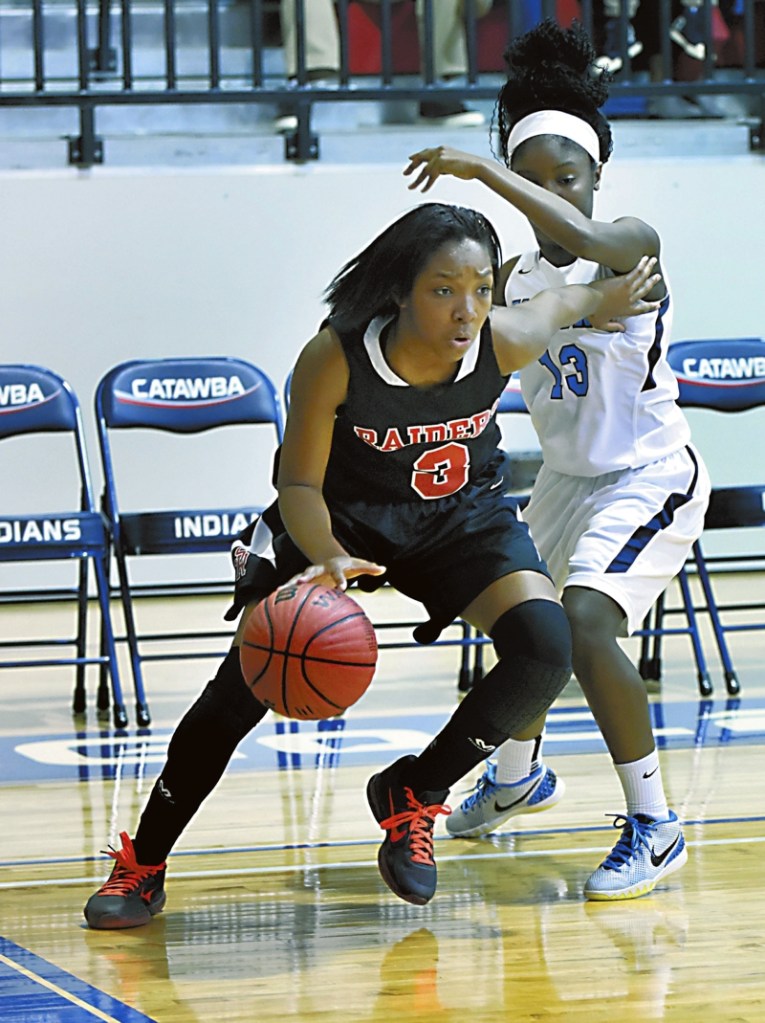 LANDIS — Sophomore Janiya Downs scored 19 points as South Rowan’s girls beat North Rowan for the first time since the 2011 Sam Moir Christmas Classic.
Riley Corriher added 16 points and Tziah Hardin had 10 points and 10 steals to lead the Raiders to a 65-34 win on Tuesday in the season opener for both teams.
Downs, Corriher and Hardin all are young — but experienced — veterans from a South squad that won four of its last five games a year ago. South has a chance to be pretty good this season.
It was a long evening, with the first half of the girls game lasting more than an hour.
South assistant Laurie Corriher started congratulating players and telling them “Good game!” after the third quarter. She thought the game had ended.
“We probably set some records for most fouls in a first half,” South coach John Davis said. “A lot of people had to step in and play, but we survived it.”
South led almost immediately, 10-0, with Brooke Lowery and Corriher making early 3-pointers.
But North, playing with only one returning starter (Brianna White) from a strong team, weathered that early trouble, and used a flurry of free throws by Bea Connor to pull even at 15-all after a quarter,
It was still a game, with South leading 25-18, with five minutes left in the half, but back-to-back steals by Hardin resulted in layups for Downs and Corriher and a double-digit lead.
“We got a lot of points in transition,” Davis said. “Our girls looked like guys running the floor, at times, because they were going so fast. We wanted to increase the speed of the game — that’s what good teams do — and we were able to do that.”
North coach Ron Bost’s first game at the helm was a tough one. The Cavaliers turned it over too often to have a chance.
“Our floor play hurt us tonight,” Bost said. “We’ve got to reduce the turnovers and we’ve got to do a better job of staying out of foul trouble, although those things are easier said than done.”
Connor got a technical foul for her fourth personal with 1:37 left in the half. By halftime, the Raiders led 37-21 and were in control.
Corriher and Downs combined for 13 points in the third quarter, as South pushed its lead to 55-31.
Connor led the Cavaliers with 14 points. She made 10 free throws in the first half. White added nine points for the Cavaliers who played without Aundrea Godfrey, one of last season’s standouts. Godfrey is expected to miss at least six weeks with a knee (meniscus) injury.
“We know we’re going to have some growing pains,” Bost said. “We’ll be all right.”