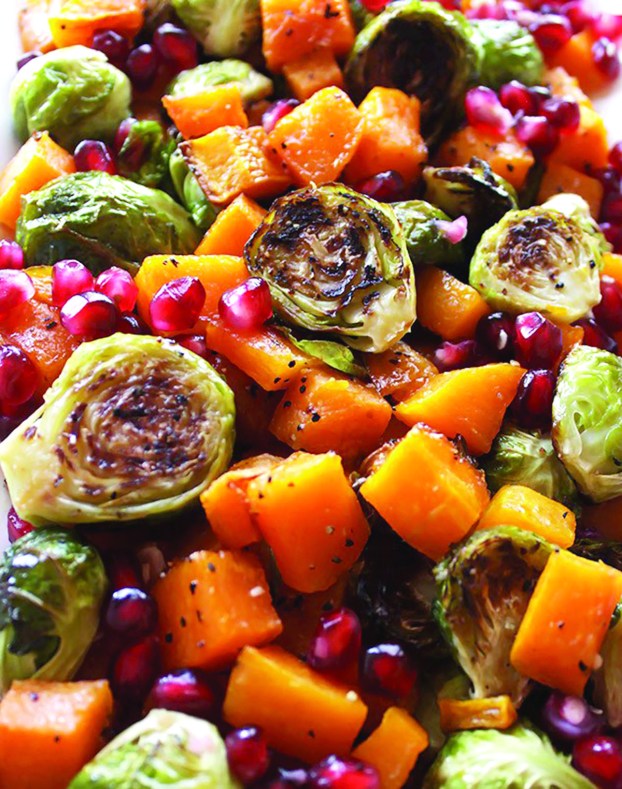 Robust Recipes. The original dish used pomegranite seeds, but we like the pecans better.

Freshen up Thanksgiving with a new dish

SALISBURY — The Thanksgiving table will be groaning with its load of turkey, dressing (or stuffing), potatoes, corn, beans, broccoli casserole, you name it.

Dip your toe in the water a minute and think of changing out one side. No, it can’t be the mashed potatoes, or in some families, the macaroni and cheese.

Change one of those veggies up a little. You might start a new tradition.

Brussel sprouts appear in stores this time of year, and yes, we know you hate Brussels sprouts. Boiled? Yuck. Roasting makes them crispy and sweetens them up. Mixing them up with another seasonal vegetable, like butternut squash can turn yuck into yum.

And if you must have green beans, try them with tomatoes instead of covered in canned soup. You might feel better after the feast.

Roasted Butternut Squash and Brussels Sprouts
Ingredients
3 cups cubed butternut squash (you can use frozen butternut squash that has been thawed)
1 pound Brussels sprouts, stem ends trimmed off, outer leaves removed, and cut in half lengthwise
Olive oil
1/2 tsp. salt
1/4 tsp. pepper
2 Tbsp. honey
2 Tbsp. fresh squeezed orange juice (about 1/2 of an orange)
Pinch of salt
1 cup pecans
Instructions
Preheat oven to 425 degrees
Place the vegetables on a rimmed sheet pan and drizzle them with olive oil. Sprinkle with salt, pepper and toss them together. Roast for 20 to 25 minutes, or until slightly browned.
While the Brussels sprouts and squash are roasting, make the orange-honey glaze. Whisk the orange juice, honey and salt together. Set aside.
Remove the Brussels sprouts into a bowl and set aside. Toss the squash with the orange-honey glaze. Return the squash to the oven for another 5 minutes, sprinkling with chopped or halved pecans. cooking until the glaze has reduced and slightly caramelized.
Mix Brussels sprouts, squash and pecans together and serve as a side dish.

This recipe was inspired by one at Robust Recipes and one from the Pioneer Woman, Ree Drummond.

Green Beans and Tomatoes
1 pound fresh green beans, trimmed
Half a small onion
4 slices bacon
1 (14 1/2-oz.) can diced tomatoes
Salt and pepper to taste
Pinch of sugar
Cut bacon into 1-inch pieces; chop onion. In a large Dutch oven, brown bacon, but do not crisp. Pour off excess fat and add chopped onion. Sauté until golden brown. Add beans and can of tomatoes, with juice, along with salt, pepper and a pinch of sugar to balance the acidity of the tomatoes.
Cover the pot, reduce to low and simmer until beans are done, 30-45 minutes.
This is a combination of recipes inspired by my husband’s grandmother, who always served a dish of cut up tomatoes in a sweetened juice with her green beans.

By Sara Anthony Hill For the Salisbury Post A sudden, flashing moment … a sound … a smell … a... read more