Cycle for Heart: Californian crossing the country for a cause 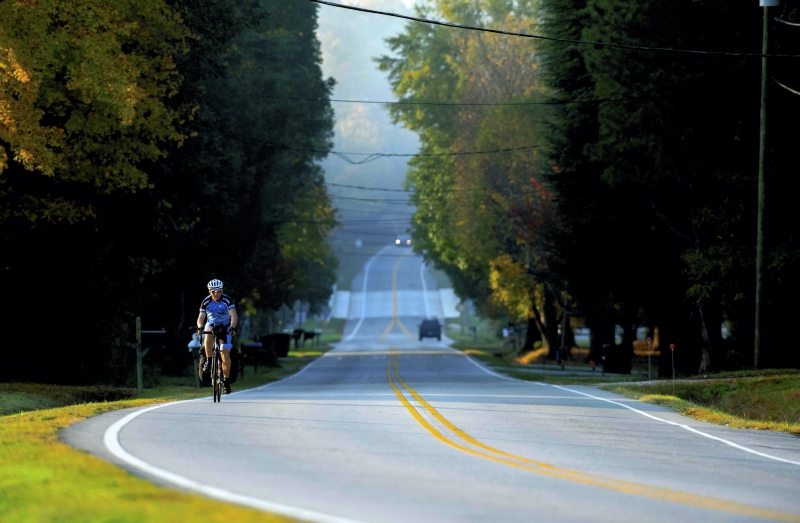 Chris Figureida departs Salisbury on Highway 601 near Catawba College on Wednesday morning after an overnight stay with a local family. Figureida has been logging thousands of miles to raise awareness of the need for healthy lifestyles for the American Heart Association. JON C. LAKEY / SALISBURY POST

SALISBURY — How far would you go to encourage people to take care of their hearts?

That’s how far cyclist Chris Figureida will have traveled when he reaches New York City later this week. It will be the end of a trip that began Aug. 12 in San Francisco.

Traveling as an advocate for the American Heart Association and Rotary International, Figureida came through Salisbury earlier this month, spoke to the Salisbury Rotary Club and spent the night at club President Brad Bost’s house.

His driving ambition — cycling ambition? — is “to make a difference in the world.” He calls his mission Cycle for Heart.

Heart disease is the biggest cause of death in this country, and researchers believe today’s children could be the first generation to have shorter lifespans than their parents, Figuereida told Rotarians.

He wants to help change that so, in addition to Rotary club stops, he visits schools along the way to talk to students about the dangers of obesity — and the fun of traveling the world by bike.

“I think it’s pretty amazing, what he’s doing,” Brad Bost said. Figureida told him he got involved with Rotary after returning from his first long trip. A friend’s dad became concerned about Figureida’s safety and suggested he become a Rotarian and connect with clubs along the way.

A partnership was born.

Figureida’s Salisbury visit didn’t allow time for a school visit, but it had an educational element, according to Bost. While Figureida and the Bost family were having dinner at Ivan’s, the conversation turned to his 2014 trip to East Africa.

Bost’s daughter, Camryn, had recently studied that part of the world. Being able to talk to someone who had been there made the area real for her, Bost said, and helped her understand the value of studying other things.

Since Figureida’s visit to Salisbury, he has covered a lot of ground. The day after the presidential election he was in Sistersville, W.Va. By Monday he was in Harrisburg, Pa.

Crossing the country usually gives him a feel for what’s on people’s minds. In 2008, he said, everyone wanted to talk about the presidential election. That was the year Barack Obama was running for the first time, against John McCain.

But not many people talked about the Clinton-Trump race in casual conversation this year, he said. It was as if people were afraid to bring it up.

The next year he pedaled from the lowest point in North America —  Badwater Death Valley, Calif. — to the highest at the top of Mt. McKinley in Denali National Park, Alaska.

When he’s not cycling, Figureida spends the rest of the year building props for magicians. (“I can’t tell you the secrets; you don’t have enough money,” he said.) His wife, a physician, is a pediatric hospitalist.

His next trip may be the most ambitious yet. He has mapped a route that begins in the country of Jordan, beside the Red Sea, and ends at Mount Everest in Nepal. In addition to a lot of land, he’ll have to cross 750 miles of the Indian Ocean, rowing a boat.

That, he says, may be the safest part of the trip. He’s been in touch with the Ocean Rowing Society, and will use a boat equipped with a desalinization unit, solar panels and other sea-going gear.

Figureida has been lining up support from Rotary clubs because he’s promoting the trip as a way to increase club membership. He’s given the trip the theme of, “What Can You Do With Rotary?”

What does cycling across Saudi Arabia, where there are no Rotary clubs, have to do with Rotary membership? Figureida says he believes it will appeal to millennials. Young people don’t want to join clubs to network or make friends; they have social media for that. “They want to volunteer and contribute in their own way,” he said.

If Rotary clubs and grants can help him fund a once-in-a-lifetime bicycle trip to promote heart health, that gives millennials an idea of how the organization could help them launch needed projects, Figureida said.

First, he has to complete this year’s trip. He encountered his first really cold weather of the journey on Monday — 24 degrees near the summit of the Allegheny Mountains. “That was kind of a shock.”

Today he’s taking a side trip to Baltimore, Md., and he expects to reach his final destination Saturday in New York City.

He has made all his trips on the same Trek 520 touring bike. “I can go all over the world and buy parts.”

At the rate Figureida is going, he may put that theory to the test.