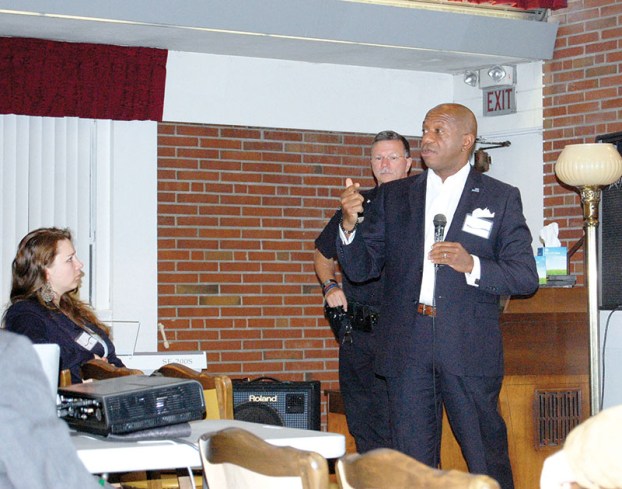 SALISBURY — Citizens asked questions about policing and when the city will start turning its meetings into action during a Community Conversation event on Monday.

The city of Salisbury held its third Community Conversation at Noble and Kelsey Funeral Home.

The event is designed to allow citizens to ask questions and share concerns and ideas with city officials and staff.

City staff from the transit, police, fire, public services, human resources and utilities departments were present to answer questions and provide information to the public.

The first two Community Conversations focused on subjects like the revitalization of the West End community, relations between the police department and the community and what opportunities were available from the city for young people.

The Community Conversation on Monday again focused on issues between the community and the police department.

Chief Jerry Stokes was there to answer many of the questions. He also introduced Garry McFadden, a Charlotte-Mecklenburg police detective and consultant for Salisbury’s Police Department.

Dee Dee Wright started off the questions by asking about the need for cases to be “air-tight” to bring them to trial.

McFadden said the evidence might be there, but credible witnesses are needed to make a good case. He also said there was nothing wrong with an individual requesting a meeting with the district attorney or detective to present evidence.

Stokes said in his review of cases that have not gone to trial, there were issues with the reliability of witnesses or lack of sufficient witnesses.

Stokes said a person convicted of a homicide will probably spend a significant portion of their life in prison, so it is important to make sure they are sending the right person to prison.

“We owe it to that person to ensure, through the criminal justice system, that we have the best evidence to send them there,” Stokes said. “And we owe it to the victim and the victim’s family to ensure that we get a proper conviction for their justice.”

He also said he is in talks with the State Bureau of Investigations for the Salisbury Police Department to participate in their cold case program, a program that reinvestigates cold cases.

Wright also said individuals who use Crime Stoppers do not feel like they are being heard.

Another attendee asked about the militarization of the police. He believed the role of the police should be focused more on de-escalating situations.

McFadden said de-escalation is a role of the police, but sometimes the officer has to respond to the “combative energy” of the people involved.

“You ask an officer to take a training … but who holds the community accountable for their knowledge of what to do in situations like that? That’s where it gets kind of sticky,” he said.

Stokes said every officer will go through de-escalation training in January and they will also be trained in verbal judo, the use of words to prevent or de-escalate a situation, as well as training in implicit bias.

Only about 20 community members attended the event, and McFadden commented on the need to invite the people who do not usually attend city events to be part of the conversation.

“If you say this is a community meeting tonight, it is not. It is the people who probably come to the same meetings every time,” he said.

Alex Clark expressed his frustrations with having meeting after meeting and no action. He said there are groups trying to help the community, but they do not have the resources to do all that they could do.

“…Until we can step up and talk about the real issues and stop having these feel-good meetings, then we can start changing,” he said. “We need to step up and be that change we want to see.”

Another attendee Pam Bloom agreed. She said she thought she would hear more about the work that is being done in the community and how the city is working with community groups.

She said from what was said during the conversation, she knows of things happening in the African American community as a white woman that the city seemed not to know.

“…So if I feel frustrated, Lord knows what’s happening elsewhere,” she said.

Linda Cureton-Dillard said the people who do not attend the city-sponsored discussions are ones who are tired of not seeing any action come out of the meetings or do not feel comfortable speaking at those types of meetings.

Mayor Karen Alexander said that the city is working on a resource guide that will include organizations that are helping the community. She also mentioned that police officers are being retrained and the department is working on hiring more officers.

“I don’t want you all to leave tonight feeling that nothing’s happened since these meetings have been going on,” she said.

Linda McElroy, director of communications for the city, urged the attendees to keep coming to the Community Conversations and to also take advantage of other opportunities to share their opinions and concerns to the city.

“…Although some of you feel like these are feel-good meetings, these are actually sessions for us to get information,” she said. “We can’t get that information if you don’t tell us.”

The fourth Community Conversation will be held in the late winter or early spring of 2017 at a different location within the city.