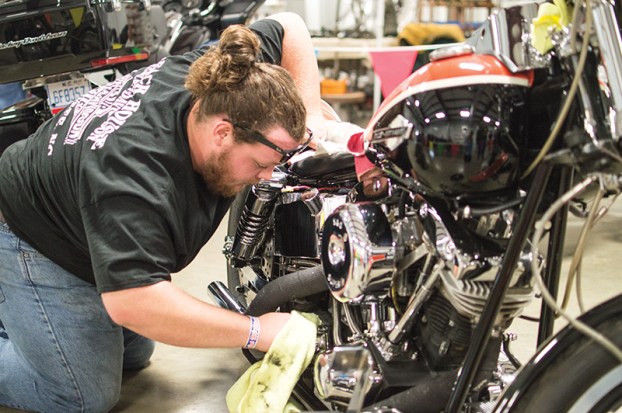 Josh Bergeron / Salisbury Post - Joshua Cook, from Charlotte, cleans his motorcycle on Sunday before the start of a bike show at the Rowan County Fairgrounds. Josh Bergeron / Salisbury Post – Motorcycle enthusiasts on Sunday look through accessories and other merchandise being sold by vendors at the Rowan County Fairgrounds. The Charlotte Concerned Bikers Association held a swap meet and bike show at the fairgrounds.

SALISBURY — If there’s only one constant in Joshua Cook’s life, it’s likely motorcycles.

Cook, a Charlotte resident, has attended the Charlotte Concerned Bikers Association’s annual swap meet and bike show for years. His parents were members of the association. Now, he’s attending too.

This weekend, Cook was among the large crowds of people who attended the Charlotte Concerned Biker’s Association’s event. It’s one of the group’s fundraisers. Usually the event occurred in the association’s namesake city. This year, it was held at the Rowan County Fairgrounds. A total of 35 bikes participated in the annual bike show. Dozens of vendors sold food, bike accessories and other merchandize.

The largest crowds came on Saturday, when hundreds of bikes filled the fairgrounds and many more attendees filed into the gates. Whether they were looking for new gear or camaraderie,  Charlotte Concerned Bike Association member Terry Brown said a love of bikes brings people back year after year.

“Some people would probably rather be with their bike than their wives,” Brown joked.

On Sunday, Cook spent part of the early afternoon cleaning his motorcycle for the final time before bikes were judged. Cook entered his motorcycle into the competition category. Stock and antique were other judging categories.

Several yards away from Cook, Randolph County resident Gary “Radar” Stoots was also putting the finishing touches on his bike. The casual encounters with familiar and unfamiliar faces also keep Stoots coming back year after year, he said.

“It’s really been one of the most friendly group of people I’ve been around,” Stoots said.

Michael and Anne Lewis are also long-time attendees of the swap meet and bike show. The pair said they repeatedly see the same faces at the swap meet events. The motorcycle world is a small one, Michael Lewis joked.

On Sunday, the Lewis family was at the bike show to promote their mission group called “Sons of Thunder,” which is affiliated with Hopewell Baptist Church in Monroe. A few other, similar mission groups were also at Sunday’s event.

Swap meet Director Rick Nail said the Charlotte Concerned Bike Association plans to continue hosting its annual event at the Rowan County Fairgrounds  because its prior venue in Charlotte was recently demolished. With the event now more than 40 years old, Nail said it is one of the largest and longest running of its type on the East Coast.

It’s unclear exactly how many people attended the weekend’s event, but Nail said it annually attracts up to 5,000 people.

By Mark Wineka mark.wineka@salisburypost.com The next time you watch an animated movie, take time to pay attention to what’s happening behind... read more