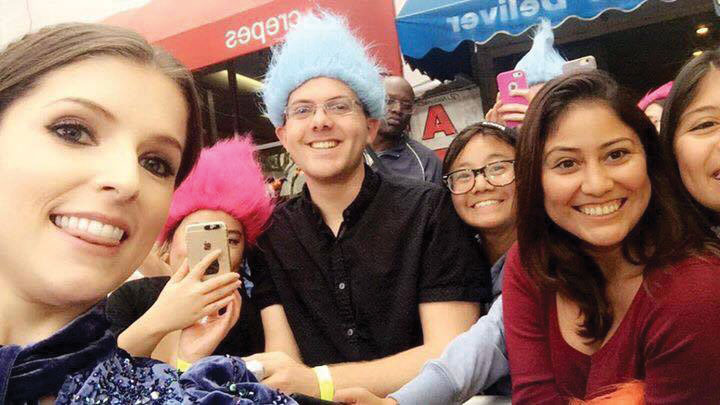 Submitted photo Actress Anna Kendrick, left, took this photo of a group of DreamWorks Animation employees, including Doug Rizeakos, center, during an event in connection with 'Trolls,' an animated movie in which Kendrick is the voice of the lead charcter, Poppy.

The next time you watch an animated movie, take time to pay attention to what’s happening behind the characters — things such as explosions, waterfalls, wind and rain.

If it’s a DreamWorks Animation project, technical director Doug Rizeakos, who works in the sets department, could have played a role in making it all come together. He and others in his section work in support of DreamWorks’ talented artists.

“At DreamWorks, you are working on pipeline connections between each department,” says Rizeakos, a 2009 graduate of Salisbury High School. “… Everybody needs pieces of the big picture.”

Since starting with DreamWorks in February, the 25-year-old Rizeakos has become part of an exciting new culture for him in the Glendale suburb of Los Angeles. He finds himself working daily in a self-contained, Google-type campus of Spanish-styled buildings.

The campus is close to a freeway, as a lot of places in Los Angeles are, but Rizeakos says there’s a much better view of beautiful Griffith Park.

He bikes to work every day, while his girlfriend, Kim Le, commutes in their lone car to her job in the downtown. Together they have learned to navigate the heavily traveled LA highways.

“The crazy drivers took a little getting used to,” Rizeako says, describing how motorists seem to merge at a snail’s pace, waiting at the last minute to move over.

Many of the artists around Rizeakos worked on DreamWorks’ latest feature film, “Trolls,” which was released last week. Right now, Rizeakos is working on an animated movie called “Larrikins,” which will be set in the Australian outback and won’t come out until 2018.

Animations take time. It’s not unheard of for a project to take two to four years, and Rizeakos says the studio’s goal is to release two movies a year.

“You’re on the show (“Larrikins” for him), but if there is an emergency somewhere else, you’re expected to lend a hand,” Rizeakos says. For technical directors, it’s really a lot of math-related problem-solving, and helping pieces fit together for the artists.

“The support tasks come first,” Doug says. “A lot of it is communication. I’m constantly talking to people in other departments, or within my own department.”

The job has its perks. At a Hollywood premiere for “Trolls,” he and Kim Le were able to meet and have a picture taken with Anna Kendrick, the actress who lends her voice to the main character, Poppy, billed as “the happiest troll ever.”

The son of Liz Tennent in Salisbury, Rizeakos was a straight-A student in school and in the top 20 of his class at Salisbury High. He participated in sports and still enjoys playing basketball with a group of guys in Los Angeles. But Doug says he might have been more on the nerdy and musical side when he was younger.

In elementary school, he took piano lessons, At Knox Middle School, he played the trombone, and around the seventh grade, he picked up the guitar and hasn’t stopped since.

When it came to college, Rizeakos visited Duke, Wake, N.C. State and the University of North Carolina at Wilmington..

“I knew I wanted to do something in animation or the video game field,” he says, and he ended up choosing UNC-Wilmington and its computer science and digital arts program.

“The beach was part of it, for sure,” he says, “but it was a pretty good fit, especially for where I was at the time.”

He met Kim at Wilmington, and job options with his bachelor’s degree would have been with video game or web development companies. But Rizeakos took a gamble and decided to go for a master’s degree in digital production arts at Clemson University.

“Going to Clemson was a decision in which I was shooting for the big leagues in my mind,” he says.

Rizeakos faced three more years at Clemson — two years of study and one year of working on an animated short, where the goal was creating something that was visually on par with a professional company.

He eventually set his sights on landing a job with a major animation studio — DreamWorks, Disney, Pixar, Sony or Blue Sky Studios. “It’s hard to get into any of them,” Rizeakos says.

DreamWorks knew a little bit about Rizeakos through its university outreach program with Clemson. Plus, he had participated in a summer program with DreamWorks in which he had worked on another animated short, getting to know some DreamWorks artists in the process.

Last fall, he went through a couple rounds of interviews with DreamWorks, leading to a job offer from the company.

“Goals are achievable, and here’s a good example,” says his mother, Tennent.

Rizeakos and Kim packed up and traveled across the country. Rizeakos can’t say enough about the sacrifice she made for the start of his career.

“She gave up a lot to move out here with me,” he says. “I feel like it was really brave of her to move to a new city without any connections.”

If you would visit Rizeakos at DreamWorks, he says you would see a pretty typical office with cubicles. One difference is that the lights are off, a requirement for the constant, important work in front of computer monitors.

“The color calibration of the monitor has to be right,” Rizeakos explains.

DreamWorks provides both breakfast and lunch for its employees.

Again, the job has its perks.