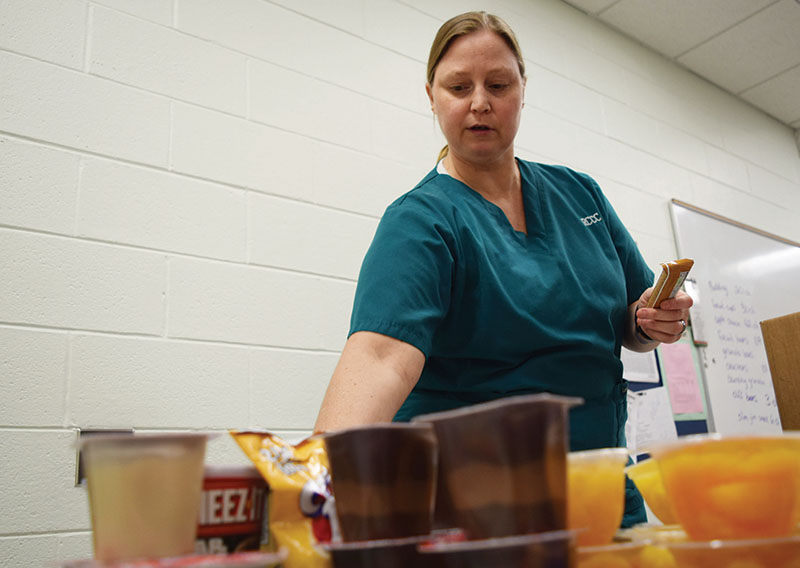 Amanda Bolyard parcels out food to donate to homeless veteran. Bolyard and other students who are members of the radiography club at RCCC decided to donate items to homeless vets as part of a required community service project. Rebecca Rider/Salisbury Post

SALISBURY — In the spirit of Veterans Day, Rowan-Cabarrus Community College’s radiography club has been collecting items for homeless veterans.

Stacy Burgess, club president, said the project came about when the club was trying to decide on a service project. For the 16 members who make up the school’s radiography club, there was no contest — as soon as the idea was posed it received a unanimous vote of approval.

“Everyone really felt it,” Burgess said.

Burgess and other students put the word out, distributing flyers and talking to friends and family. For a while, it was slow going, but just when Burgess and the others were ready to start wrapping things up, donations started pouring in.

“Next thing I know I’m getting phone calls,” Burgess said.

The group has received donations from RCCC’s dental assisting program, from veterans and the family of veterans, from patients at Burgess Chiropractic and from the school’s health and education department. Ruby’s Boutique in Salisbury offered to serve as a donation location.

The program is collecting new and gently used backpacks to distribute to area organizations.

“I felt like the backpacks are important because this is going to be their property,” Burgess said.

Backpacks are portable, easy to carry storage that will allow homeless veterans to keep their belongings safe and dry.

Each is stocked with Ziploc bags containing toiletry items like soap, shampoo, toothbrushes and toothpaste as well as a pair of socks. So far, the group has put together 33 backpacks — including four that are female-specific.

The club will donate 25 of the backpacks to Rowan Helping Ministries this afternoon. The rest, Burgess said, will be taken to the Salisbury VA and Cabarrus County Veterans Services.

It may have started out as a community service requirement for the club, but Burgess and the other members are thinking of passing the torch to incoming freshman.

The group is still taking donations, and said they’re looking for tennis shoes, boots, shampoo, washcloths, toboggan hats and gloves. Any clothing donated should be “rough” clothing that will hold up against wear and tear. Donations can be dropped off at Ruby’s Boutique or contact Stacy Burgess at burgess.s.44487@student.rccc.edu.