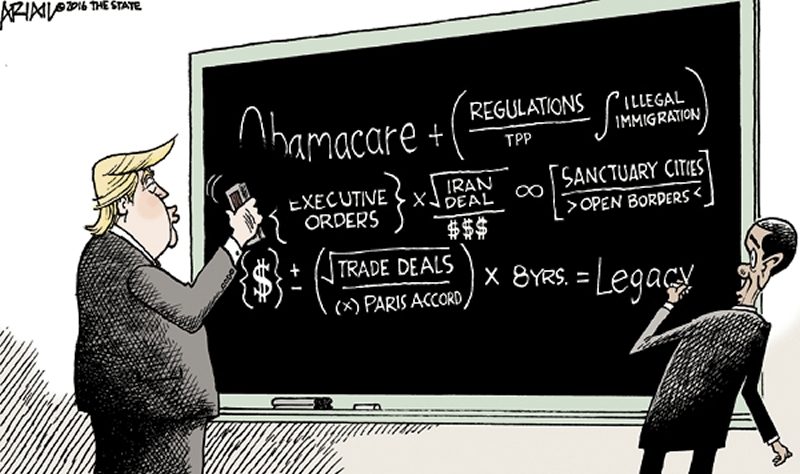 On Nov. 9, it became official: Donald John Trump, our improbable Republican candidate, would be the 45th president of the United States.

The media was dumbfounded and still doesn’t get it, nor do the Democratic Party and purveyors of liberal thought in America.

Conservatives who jumped on the Trump bandwagon of change may have gotten more than they bargained for. The lament of the nation’s evangelical movement for a lion king like David as president may have justified their support. For many, their prayers were answered. As stated by Omar Khayyam, “The Moving Finger writes; and, having writ, Moves on.”

The 2016 presidential election, like the 1948 race between Dewey and Truman, resulted in the odds-on favorite being defeated. Many in Trump’s own party distanced themselves from the candidate, unsure of his ability to win and dissatisfied with his public posture.

As an early Trump supporters who did not waver in my belief that he would win, here’s the scoop:

• Trump always looked the part. Seldom was he seen dressed casually; his bearing was presidential, though his mouth occasionally reacted faster than prudence might dictate.

• Trump stood firm in the face of assaults from the left, right, media, lobbyists, Republicans, Democrats, environmentalist, etc. As the Stealers Wheel song goes, “Clowns to the left of me, jokers to the right, Here I am, stuck in the middle with you.”

This unlikely blue-collar billionaire stood squarely with the voices of the middle class, rural America and those who perceived themselves as honorable but had been depicted as deplorable. As Walt Whitman so eloquently wrote, Trump heard “America singing, the varied carols” he heard, while others were simply watching the parade go by.

• On an individual level, Trump was always personable, polite and engaging. He went the extra mile for the party, flying in at his own expense to help raise money whether in Arkansas, North Carolina or some other state. He had cred with the rank and file, which gave him unexpected coattails for down-ticket candidates. He seemed truly interested in our success.

• Trump was on-message for the nation when he spoke of the evils of unchecked illegal immigration; the expense of Obamacare, acknowledging as did Bill Clinton that it is the “craziest thing” he’d ever heard; trade imbalances from treaties which put this nation at a disadvantage; jobs as the linchpin to the nation’s prosperity; and the corruption of the Clinton machine.

• Pundit Van Jones called this the “whitelash” election and joined the legion of young, disaffected and wired-in aspirants seeking control of the nation. Without giving up what we already have, Trump quit making the election about feel-good empty rhetoric or a whitewash of our problems. He kept it real. For those willing to do some soul searching, such as many blacks who chose not to support Hillary Clinton, it was painfully obvious that her pandering would not work.

• The need for an independent counsel to investigate the Clinton emails and the Clinton Foundation must be honored by Trump.

I found it ironic when people complained about Trump’s lack of experience for the job as president. As a non-soldier and non-politician, Trump is the kind of businessman envisioned as the nation’s president when Calvin Coolidge wrote “the business of America is business.”

Getting elected was the easy part. Governing with wisdom, a balanced budget and inclusion will be a major challenge. Trump must learn, as the Negro spiritual says, that “There is a balm in Gilead, To make the wounded whole; There is a balm in Gilead, To heal the sin-sick soul.” To heal the nation, Trump will have to soothe it with a balm of hope, freedom, liberty and encouragement.

So far, the real problems aren’t being addressed—protecting Social Security and keeping that money from being spent in the general fund. A recent quote sent me anonymously said the government is always telling us we are about to run out of funds for Social Security. Has anyone said we are running out of funds for food stamps, Obamacare or other entitlements in which there is no pay-in?

The Second American Revolution has begun. How well we get our priorities in order will dictate who gets to fight another day. I hope those who wouldn’t stand by Trump aren’t moving to the front of the line to call the shots, or those who have been too long at the dance continue to go around the floor.

I hope the Trump children do not make decisions while holding on to properties that would cause conflicts of interest. I hope our judiciary will rediscover the meaning of our Constitution and abide by it no matter how many don’t like the Electoral College.

And I hope we quit trying to build dynasties from the families of elected officials. We have had our fill of Bushes, Clintons  and Obamas.