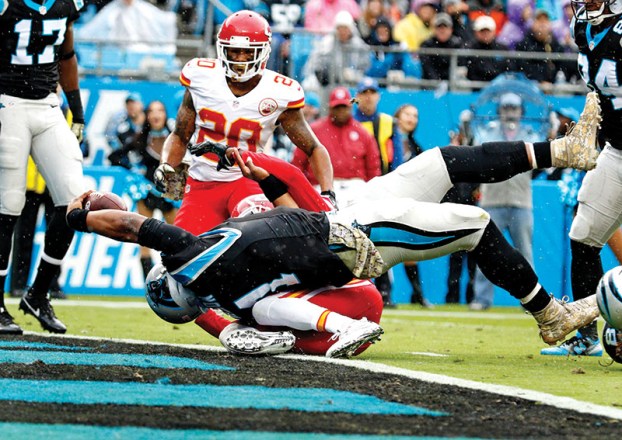 associated press Carolina Panthers’ Cam Newton reaches over the goal line for a touchdown against the Kansas City Chiefs in the first half in Charlotte on Sunday. Kansas City won, 20-17.

The Panthers, defending NFC champions, started this season 1-5, but had won two straight games and looked to be on their way to a 4-5 mark after Sunday’s game with the Chiefs at Bank of America Stadium.

Carolina dominated the first half, but two critical turnovers turned the apparent victory into a 20-17 loss. Cairo Santos’ 37-yard field goal as time expired was the game-winner for Kansas City, now 7-2 and tied for first place in the strong AFC West.

“It’s just disappointing,” said Rivera. “We had every opportunity to win a football game today and we didn’t take advantage of it.”

The Panthers led at halftime, 17-3, and their defensive effort in the first 30 minutes resembled last season when Carolina sported a 10-0 record at home.

Kansas City had just 110 yards in the first half and appeared lucky to have gotten a 47-yard field goal from Santos just before intermission. Meanwhile, Carolina quarterback Cam Newton passed for 157 yards and ran for 43 more.

The score was still 17-3, entering the final quarter.

Kansas City quarterback Alex Smith seemed to further sink the Chiefs’ chances when he missed a wide open Chris Conley in the end zone and the sputtering offense again had to settle for a Santos field goal, making it 17-6.

But the game and perhaps, the fortunes of both teams, changed with 10:32 left in the game.

On third down at his own 29-yard line, Newton felt pressure up the middle but still tried to connect on a pass to tight end Greg Olsen. The ball floated over Olsen, right into the hands of Kansas City safety Eric Berry, who made an amazing, zig-zagging return across the field for a 42-yard touchdown.

Berry, the NFL Comeback Player of the Year last year after overcoming Hodgkin’s lymphoma, had picked off Newton before. They played against each other in Atlanta high school 7-on-7 camps before going head-to-head in the SEC when Berry starred at Tennessee and Newton became a household name at Auburn.

“I was just focused,” said Berry. “I knew there was going to be an opportunity somewhere and when it came, I just wanted to make it count. I just tried to make them miss once I had the ball and after that, it was just instincts.”

The Chiefs added a two-point conversion and all of a sudden, the score was 17-14 and the momentum had changed.

Carolina’s next drive only netted 18 yards and one first down. Kicker Graham Gano, filling in for injured punter Andy Lee, got off a 43-yard boot, but the Chiefs’ Tyreek Hill returned it to the Panthers’ 49-yard line.

Kansas City quickly moved forward, and on 3rd-and-2 at the Carolina 14, Smith again threw high on a possible touchdown pass in the end zone, this one over the head of tight end Travis Kelce. The Chiefs settled for another Santos kick, but this one, from 33 yards, knotted the score at 17-17 with 4:28 left.

“They were bringing the heat up the middle,” said Smith, explaining the third down miss. “(Luke) Kuechly was coming and he jumped, and I threw it a tick sooner than I wanted to.”

In the final minutes, both teams had short possessions and punts. Carolina had one last chance to avoid overtime, starting from its own 20-yard line with just 29 seconds left.

On first down, Newton completed a 14-yard pass to his go-to receiver, Kelvin Benjamin. However, like Berry, the Chiefs’ Peters made a huge defensive play, taking the ball from Benjamin and returning the fumble to the Panthers’ 24.

Carolina receiver Ted Ginn Jr. had his teammate’s back.

The play seemed to stun the Carolina defense, because on the Chiefs’ first down, running back Spencer Ware burst through the line for 11 yards and another field goal from Santos seemed all but assured.

Smith ran one more play, just to give Santos a straight-on angle and the Chiefs’ kicker nailed the game-winner.

“It’s a matter of protecting the football late in the game,” said Rivera about the fourth-quarter execution. “We turned the ball over twice. If you do that, you don’t give yourselves a chance to win. We played against a good football team that stayed poised and made plays when they needed to. We didn’t.”

Kansas City coach Andy Reid was pleased afterwards with the way his team stayed the course.

“That’s a good team over there,” Reid said about the Panthers. “And this is a tough place to play. But this team has some character and they rely on each other, expecting each other to make plays.”

Newton ended with 261 yards passing (23 of 38) and was the Panthers’ leading rusher with 54 yards. Smith was 25 of 38 for 178 yards but the Chiefs did not score an offensive touchdown.

Both teams shut down the run for most of the game. Carolina had 99 yards on the ground while the Chiefs had just 91, 61 coming from Ware.

The Panthers have no time to wallow in self-pity. Carolina plays the NFL’s Thursday night game this week, hosting New Orleans in what may be its last chance to make a comeback in the NFC South.

“Well, that’s one plus,” Rivera said of playing in four days. “We don’t have to dwell on this for very long. What we have done is put our backs completely against the wall. There is no room for error now.”

By David Shaw sports@salisburypost.com HICKORY — It winds up as a forgettable year for Catawba’s football team, capped by a parting... read more