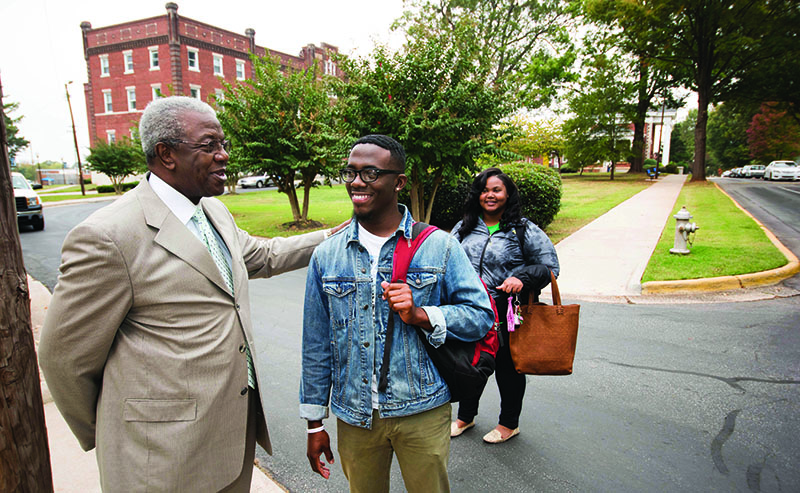 SALISBURY — In 2006, George W. Bush occupied the White House, Beyoncé was a single lady, and Dr. Jimmy Jenkins stepped on the Livingstone College campus as its new leader.

A lot has changed since then. The Bush presidency is history. Beyoncé is famously married.

And Jenkins has transformed Livingstone from a struggling institution at risk of losing its accreditation to a stable, holistic college dedicated to transforming students’ lives.

Jenkins’ decade as Livingstone College’s 12th president is the longest tenure since Dr. George Shipman stepped down in 1982.

Now 73, Jenkins says retirement is not on his immediate agenda. But a 10th anniversary is a good time to reflect on the journey he and the college have taken together.

“When I got to Livingstone, it had many, many challenges, I will put it that way,” Jenkins said.

Poor finances had gotten the historically black college in trouble with the South Association of Colleges and Schools. It was so bad, Jenkins learned, that payday sometimes went by without pay. Enrollment was faltering and deferred maintenance was taking its toll on the campus.

Salisbury merchants would not accept Livingstone purchase orders, Jenkins says. Instead, they required Livingstone to pay up front.

Now, according to Jenkins, vendors accept Livingstone purchase orders. The college has full accreditation. And the debt of nearly $20 million the college had when Jenkins arrived was whittled down to $8 million within five years, he said.

“We have not looked back since.”

Jenkins found little fat in Livingstone’s budget when he arrived, but the college had to cut back.

He told staff and faculty that Livingstone could maintain the status quo, lose accreditation and go under — “and then everyone loses” — or trim the budget.

“There was really not a choice.”

That’s what trustees were hoping for when they hired Jenkins. He had had led two other historically black colleges through financial challenges — his alma mater, Elizabeth City State, and Edward Waters College in Jacksonville, Fla.

The Livingstone search committee was drawn to Jenkins.

“We were convinced it was another hand that was leading us,” Thompson said in 2006.

“He has a good vision of how to corral young black (students) who didn’t seem to be focused,” Thompson said. “He is trying to save another generation.”

State Alexander, a vice president at the college and assistant to the president, has seen several presidents come and go. Jenkins has been there the longest.

“The evidence of his work and the longevity of his time speak to the improvements he has made,” Alexander says.

Enrollment at the college had been around 600-plus for several years when Jenkins arrived, Alexander says.

Now the student body has grown to 1,200-1,300, and Jenkins says he would like to see it reach 2,300. Livingstone is the only HBCU to maintain an increase in growth over the past five years, he says.

The campus has curb appeal again, including a wrought iron fence with brick pillars that adds security as well as aesthetics.

Ground has been broken on the F. George Shipman Science Annex Building, and another groundbreaking is planned in February for an education/gymnasium facility. A hospitality management and culinary arts program has opened at the former Holiday Inn on Jake Alexander Boulevard.

But if you ask students what mark Jenkins has made on the college, they’re likely to repeat one of Jenkins’ adages — what Alexander calls “Jenkinisms.”

Jenkins laughs at that. He offers three favorites that he repeats to students often.

First, there’s the Golden Rule — not the Biblical one, he says, but rather, “He who has the gold rules.” Students who work harder will amass more gold, Jenkins tells them, and then they can rule their own lives.

And, finally: “It is a fool who is running a race and recognizes that he is behind but refuses to run faster.”

New students who squeak in at Livingstone with marginal grades know they are starting behind others. If they don’t work harder, Jenkins says, they are throwing away the opportunity Livingstone offers.

Nothing is left to chance when it comes to recruiting students to Livingstone. Jenkins has established a “war room” where each prospective student is tracked on a chart with different colored tacks for every step of the process — application, FAFSA form, housing fees.

More applications are coming in, and Jenkins gives part of the credit to the success of the athletic program. “We used to be the whipping boy.”

In recent years, the men’s basketball team has won back-to-back CIAA championships. Livingstone nearly scored a three-peat when it advanced to the finals earlier this year. Virginia State won the title instead.

Jenkins says other sports are doing well, too, such as golf and track. He credits the turnaround to the high expectations he communicated to coaches and the financial ability to increase scholarships and update facilities.

“We are now really a team in the CIAA to be reckoned with.”

Jenkins has high expectations for Livingstone students, too — in academics and behavior — and he holds them accountable.

Walking across campus with a reporter and photographer, Jenkins encounters senior Marquyse Jackson.

Jenkins knows the student’s name very well. Once when he was walking to Varick Auditorium for the college’s weekly assembly, Jenkins saw Jackson going in the opposite direction.

“You’re going the wrong way. What is your name?” Jenkins recalls asking.

When Jackson said he’d be back in time for the gathering, Jenkins told him he’d better. “I’m going to call you out in assembly.”

Jenkins was true to his word. He called Jackson out at the assembly that day and again at the next week’s assembly. Both times, Jackson was present.

Accountability isn’t always about calling people out. Jenkins also believes in giving students extra incentives to do well  —  “putting the sugar in the medicine,” he says.

The sugar can come in the form of privileges. For example, student IDs are color-coded according to grade point averages; students with the black card for the highest grades have access to a lounge and other perks.

More often, though, the incentive is monetary. With 95 percent of students using federal financial aid and loans, and the college held accountable for their default rate, everyone at Livingstone is highly attuned to finances.

One of Jenkins’ signature innovations is the Bridge Program, a boot camp for prospective students who don’t meet Livingstone’s 2.0 GPA minimum for admission.

They can attend the six-week summer program free of charge, but they put in a kind of sweat equity with early wake-up calls, vigorous physical workouts and an intensive program of basic skills.

The program includes a wealth of motivational speakers, cultural events and trips — that sugar Jenkins advocates.

The big payoff comes at the end. Any student who successfully completes the Bridge Program gets a $1,500 stipend toward tuition and fees in the fall, when they enter as provisional students. To earn “regular” status, they must earn a 2.0 GPA.

Jenkins says that, thanks to the generosity of foundations and benefactors like Bill Stanback and Food Lion, the program admits 100 or more students a year. Most see it through to the end, he says, with only three to five dropping out each summer.

The motivation to succeed is strong.

“Literally, that program was their last resort to go to college,” Jenkins says.

“I was thoroughly convinced that many of these students that want to go to college — African-American students, that is —  have been victims of their environment,” he says.

They have intellectual capabilities, he says, but they don’t have the grades to get into college because of factors outside their control, such as the circumstances of their birth or the school systems they come out of.

The Bridge Program helps those young people realize they can be competitive and successful.

The Bridge Program is just the beginning, though. Jenkins has shaped Livingstone into what he calls a “holistic college” that aims to produce well-rounded students prepared to command their place in the global society.

“Education is the surest vehicle for upward mobility,” Jenkins often says — perhaps the No. 1 Jenkinism.

Brien Lewis, president of Catawba College, says Jenkins is warm and genuine. And always on point.

“He is as passionate an articulator of that message as anyone I’ve ever encountered,” Lewis says. “Everything he does is through that lens.”

The two colleges have a positive relationship and are exploring things they can do together, Lewis says. One example so far is the College Night Out held downtown at the beginning of the school year. Livingstone and Catawba students can be seen “literally dancing in the streets together,” he says.

Only 18 percent of students bound for higher education choose independent four-year colleges like Catawba, Lewis says, and historically black institutions get an even narrower slice of the pie.

“They’re obviously serving a great need and, from what I can tell, doing it well.”

Jenkins says 71 percent of Livingstone students are the first generation of their family to go to college. They may come from a background that is anti-intellectual, where college has not been considered a next step.

Livingstone offers them an opportunity to take that step — and the challenges that come with it.

“The first thing we have to do is change their behavior,” Jenkins says. And attitudes. And mindset.

That means making all the right “little decisions” regarding studies and commitment and character.

As extra incentive, students can shave $250 off their tuition bill every time they raise their GPA by a tenth of a point. So a student who goes from a 2.1 to a 2.3 earns $500 toward tuition and fees.

More sugar in the medicine — and realizing the connection between hard work and success.

Jenkins has made some controversial decisions. Alumni were not happy when he had the bear statue representing Livingstone’s Blue Bear mascot moved from outside the football stadium to the front of the campus, facing Monroe Street.

Then he took the extra step of having the growling bear painted a steely blue, and the rock at its feet was painted green. Now he sees alumni posing to have their picture taken with the statue, he said.

Something else has changed color over the past 10 years, Jenkins’ once-black hair. “I earned every one of these things,” he says, pointing to the white hairs on his head.

He says there are several projects he’d like to see through before he retires — at least the two new buildings that are in the works.

Then he’ll be able to consider opening another new chapter in his life, he says.