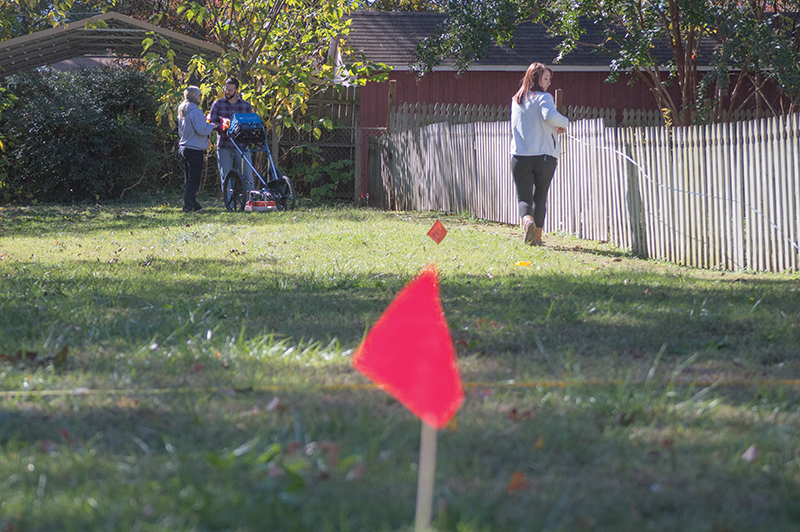 Josh Bergeron / Salisbury Post - University of North Carolina - Greensboro students on Saturday used radar to examine a stie within the historical boundaries of the former Confederate prison in Salisbury. The students specifically examined a site where a mill once sat.

SALISBURY — Evidence of Salisbury’s Civil War history may sit a few feet beneath a site on East Bank Street.

Preliminary results from radar analysis conducted by University of North Carolina-Greensboro students may show the corner of a building first used as part of a cotton mill and later incorporated into a Confederate military prison.

UNCG geography professor Roy Stine on Saturday cautioned against definite conclusions that radar analysis shows the foundation of a building. When combined with past work, however, Stine said it’s “very likely” that research in the area has found parts of a prison that once housed up to 10,000 people.

Stine and his students were in Salisbury again Saturday to conduct a second sweep of the site located on the 300 block of East Bank Street. Archaeologist Kenneth Robinson was also in Salisbury on Saturday to discuss results of prior work within the historical boundary of Salisbury’s Confederate prison.

In the early 1860s, Confederate soldiers established a prison in Salisbury. Soldiers picked an abandoned cotton mill near the railroad line that cuts through modern-day Salisbury. At its peak, the prison is thought to have held 10,000 prisoners. At most, the town of Salisbury had just a few thousand residents at the time. At the end of the war, Union soldiers would burn the prison.

Historians have placed outlines of the prison onto modern-day maps of Salisbury. Susan Sides, president of Historic Salisbury Foundation, said the latest radar analysis of the prison site occurred as a result of an effort to place a monument on the East Bank Street lot. Before the foundation placed a monument on the lot, Sides said the group wanted to know whether anything significant lay underground.

“The prison was so large and, through all the years, you’ve got residences built up and you don’t have any clue what’s beneath the ground,” Sides said.

Initially, Sides said, she wrote to Cultural and Natural Resources Secretary Susan Kluttz about the idea. Now, the project has become a master’s thesis for UNCG student Megan Peters. In addition to analyzing the East Bank Street site, Peters says she hopes to include previous research about Salisbury’s Confederate Prison in her thesis.

It turns out there may be something on the lot, according to work by Stine’s students. Initial radar analysis shows an underground rectangular shape near the back of the lot. Stine wasn’t able to say what type of material comprised the rectangular shape.

First, Stine’s crew used radar that could penetrate 4 feet. On Saturday, they brought radar that could go 8 feet deep. A number of history buffs turned out to get a glimpse at the preliminary results and hear a presentation about previous research.

In 2005, Robinson analyzed tracts of land within the former prison site and found a “double straight line feature” underground. Initially, he thought he had found parts of the prison’s wall. Later, he determined it to be a drainage pipe instead. At another point, Robinson found the location of a post used as part of the wall.

The site UNCG students are investigating would have been the entrance to the prison, Stine said. There’s still a degree of uncertainty about what radar has shown on the site, but attendees of Saturday’s presentation were encouraged about future results.

“We don’t know exactly what we’ve got, but we think it’s something,” Stine said.

If the UNCG students find prison artifacts, or even parts of buildings, underground, Sides said the Historic Salisbury Foundation would try to incorporate those items into a monument somehow.