How to get out of the slavery of debt 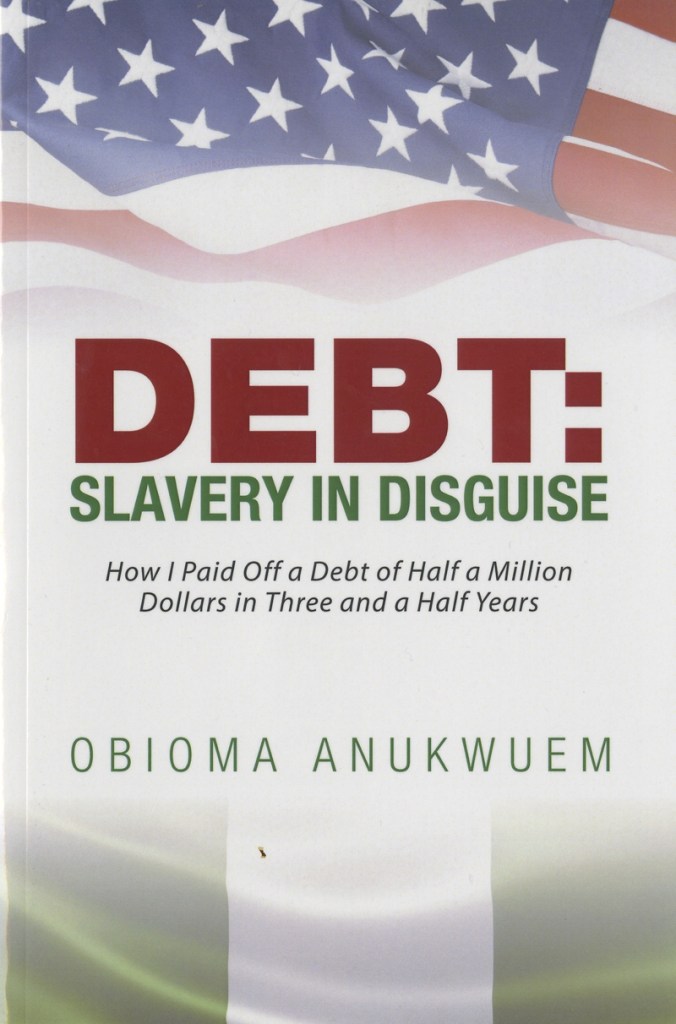 He came from Nigeria to practice medicine, and to live the American dream. Just a couple years later, he was deeply in debt and deeply disturbed by it.

Obioma Anukwuem, who is now a hospitalist in Iredell County, found himself with a nice house and two cars. His family traveled, they bought things for the children and he “desired to live well, comfortably, to buy into the American dream.

“ … Over time, I saw my debt go up. I didn’t pay too much attention, but it kept going up and up and up. I found out that it was too much. … I was reminded often of how much money I owed,” Aunkwuen said.

He had a mortgage, car loans, credit cards. “It stole my peace of mind. … When I discussed debt, people said, ‘This is the way America is.’ But I didn’t believe it. … I didn’t feel good about it.”

Anukwuem was so disturbed, determined and moved by his struggle with debt that he wrote a book, “Debt: Slavery in Disguise,” with this subtitle: “How I Paid Off a Debt of Half a Million Dollars in Three and Half Years.”

And the secret to his method is straightforward: Discipline.

He says he wrote the book, another first for him, because he wanted others to know that they can help themselves.

“People asked me, ‘You’re so busy, how did you have time to write a book?’ When you are so passionate about something, you can make things happen.”

Once he determined he and his wife had to pay off their debt, he felt good, but they had no plan. It took them a few years and they tried different things until they finally worked something out.

They wanted not just be get out of debt, but to be more charitable. He was tired of being overwhelmed.

Most people don’t want to talk about finances, Anukwuem found, most people are uncomfortable. But one of his friends got the book, and said he didn’t have debt, just a mortgage. “That IS debt,” Anuwuem said. You don’t want to keep working and not have anything to show for it.

“Every time you work, you wonder where the money went. I understood I had to plan to pay it off.” His wife was very supportive. “Women are used to making sacrifices. We men are different,” Anukwuem laughs.

They made sacrifices, controlled their spending, and made sure they were doing it in such a way as to not feel deprived. As they made progress, everyone felt better, even the kids. That excitement prompted him to write.

“I wrote about 500 words to start, then read it to my wife and children. They said, ‘Man, it sounds like a book already!’”

Along with working on his book every day, he also worked on the debt every day. He called the bank to learn about interest, he learned about paying down the principal of the mortgage after being shocked to discover much interest drove up the cost of his house.

“This is not a way to get rich,” he said. “This is a recipe to impoverish you and keep you in bondage. It enslaves us. It takes away everything you have.”

He’s seen people who have worked 20 years totally rattled because “this service to their debt all those years has never truly paid off.”

Anukwuem and his family got to the point where their net worth was negative. “I watched it go from red to green and it was very exciting. Our net worth continued to go up and up because we were managing it better. We wanted to get to that point. It was a strong motivator.”

Patients asked him why he was worried. After all, he was a doctor, “But doctors can be in worse trouble than you think. … People think material wealth is what it’s all about.”

Anukwuem’s brothers were already in America when he came. He knew how they lived, and he wanted the same.

“Don’t fall into the trap. That’s my advice for everybody, immigrants and Americans. … People buy and they owe so much that they get themselves into trouble. I just didn’t like that. … I did not want to think about that. I had enough to worry about. Some areas you can’t help, but debt is one you affect.”

Working on the book got tough, but his wife and children were always asking about his progress. He had taught his children to finish what they started, so he kept going.

The family started out deciding what they wanted to spend, what was important. They tried to get the best value; they decided a gym membership was not a necessity.

At first, Anukwuem had a spreadsheet with every receipt, keeping up with it constantly. After a while that was too much, but they had learned things, like not eating out as much.

“I told my wife if one or two people tell me I’m doing better, that will be very satisfying.”

Anukwuem’s book is available online. He will sign books at 7 p.m. on Nov. 17 at the Barnes & Noble in Birkdale Village.