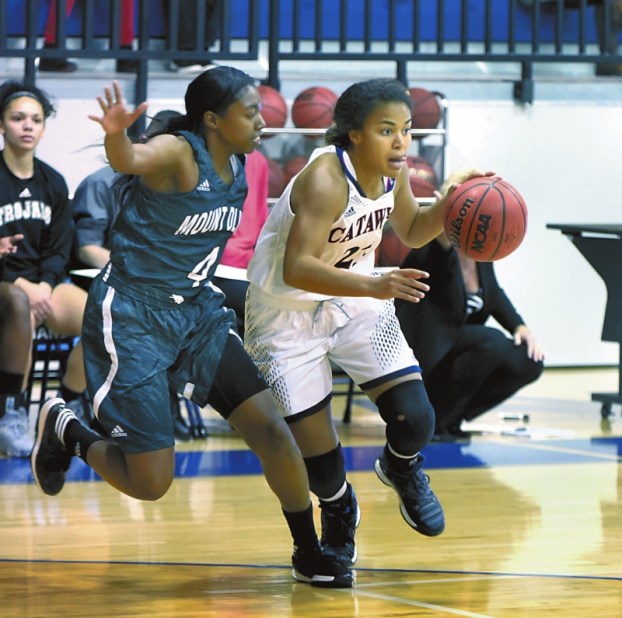 SALISBURY — Eight Indians, including an under-the-weather Terri Rogers, were able to suit up for Catawba’s women’s basketball opener at Goodman Gym.
Eight was enough because Rogers produced 29 points and 15 rebounds and was so good that coach Angie Morton joked that maybe the whole team needs to come down with the flu.
Rogers kept the Indians in the game and they eventually rallied from a 13-point deficit and beat Mount Olive, 74-70, on Friday night.
“Terri was great and she led us to a big opening-night win,” said Catawba’s All-South Atlantic Conference guard Bri Johnson, who scored all 19 of her points in the second half. She was 0-for-8 from the floor in the first half.
“It was awful,” Johnson said. “I couldn’t play offense, so I tried to play defense.”
Catawba controlled the first quarter and part of the second because the 5-foot-11 Rogers was making post moves and grabbing boards and sticking them back in. She had 20 points and nine rebounds at the break. She made lefty layups and she made righty layups, and Mount Olive had no answer.
“Regardless of my health, I was determined to fight through it and play well,” Rogers said.
Still, Mount Olive closed the first half with a 12-0 run to take a 36-33 lead. Almost all of those 12 points came directly off careless Catawba turnovers.
“(Point guard) Serena Brown got her second foul and sat down and Mount Olive picked up the defensive pressure and we got rattled,” Morton said.
Johnson finally broke the ice, personally, when she swished a 3-pointer with 8:50 left in the third quarter to cut a five-point Mount Olive lead to two.
But then Mount Olive, picked second in Conference Carolinas, started to pull away from the Indians. When Kiara Jones cashed in a drive to end the third quarter, the Trojans led 55-46.
And then it got worse. A lot worse.
With 4:54 left to play, Jones slashed for a three-point play, and the Indians were down 13, 68-55.
“We were kind of all over the place at that point,” Rogers said. “But then we got it together just in time, and there at the end, we did what we had to do.”
Officially, a breathtaking comeback began with a short jumper by Marshauna Butler at the 4:11 mark. Brown got a defensive rebound and drove coast-to-coast for a layup to cut the deficit to nine points, and then Brown located an open Johnson near the top of the circle. Johnson’s 3-pointer swished the cords with 3:11 remaining, the Indians trailed 68-62, and the game no longer looked lost.
“We were getting some very good energy about ourselves,” Johnson said. “Our 2-2-1 press was giving them fits, and we were getting turnovers.”
Johnson attacked relentlessly in the stretch run. Her free throws with 2:28 left made it a four-point game. Her jumper with 1:57 remaining pulled the Indians within two.
East Carolina transfer Felicity Havens answered with a clutch bucket for the Trojans, but Johnson drove for another layup. Then Johnson swiped the ball and headed for the rim again. This time her squirming shot wouldn’t drop, but Rogers was flying in behind her for the follow. That made it 70-70, and the crowd erupted.
Butler hustled for a steal with 43 seconds left, and the Indians executed perfectly out of the timeout for the quick Brown-to-Rogers layup that provided a 72-70 lead.
When Havens couldn’t get a drive to fall with 17 seconds left, Morgan Franklin, swooped in to grab the game’s biggest board for the Indians.
“Morgan came out of nowhere,” Morton said.
Mount Olive had to foul, and Butler, who had 11 points and 10 rebounds, calmly went to the free-throw line and knocked down two with 10 seconds left to secure the improbable victory.
“We had a winning mindset in the fourth quarter,” Morton said. “As short-handed as we were, we didn’t get tired, and I thought Mount Olive ran out of gas.”
After the game, Rogers fought back sniffles, munched fruit and promised that she’ll be ready to go again this afternoon. The Indians host Barton at 4 p.m. in the second day of the opening doubleheaders.
Barton pounded Queens, 79-46, on Friday. Queens will play Mount Olive today in the first game of the doubleheader at 2 p.m.