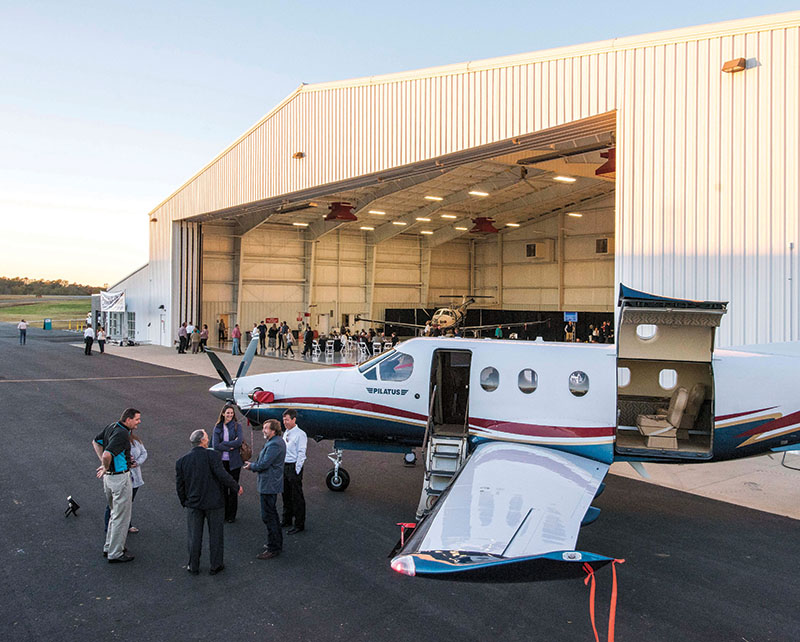 The company is also a commercial operator, providing on-demand travel for the business community.

Steve Setzer, president of the company, said he was happy to see old friends and colleagues, as well as new visitors.

“We’re really glad to have the community come and meet us,” he said, adding he was excited at the turnout of the event, regardless of whether the visitors were future customers or just wanted see the location and planes.

Five of the 13 planes Strategic Moves manages are based in Salisbury and the public was able to climb inside and explore the different planes.

William Marino and wife Kristen attended the event partly because a friend of theirs is involved in the company and also because it was a chance for their son William, who wants to be a pilot, to see the planes.

“It would be kind of nice not to take coach flights,” Marino said.

Marino said Rowan County has been doing a lot to build businesses in the area.

He said the fact that Strategic Moves allows clients more freedom in terms of when and where they are able to travel, the company is a great selling point to attract more businesses into the area.

“There’s a lot of benefit to this,” he said.

And since the company is well established, having started in 2002, Marino said the company has a lot of potential.

Travis Stewart said she came to the event to learn more about the business. Although she probably won’t use the services herself, she said she will be able to tell her contacts about what the business offers.

She said while Strategic Moves’ company grows, the businesses that work with the company will grow and gain awareness in the community as well.

“It’s a great thing for this area,” she said.

Along with other community members, city officials from Salisbury and surrounding cities attended the event, including Salisbury Mayor Karen Alexander and East Spencer Mayor Barbara Mallett, as well as business leaders and State Rep. Harry Warren.

Rowan County commissioners, including Judy Klusman and chairman Greg Edds, attended the event. Setzer said the commissioners played an important role in bringing the company to Rowan County and he looked forward to working with them.

Edds said Strategic Moves was able to expand the tax base, bring jobs into the area and add to the county’s assets.

Attendees were also able to submit their names into a drawing to win a free charter flight to a destination that is an hour away. The flight is valued at $3,000.

For more information on Strategic Moves, visit their website at www.flystrategicmoves.com.