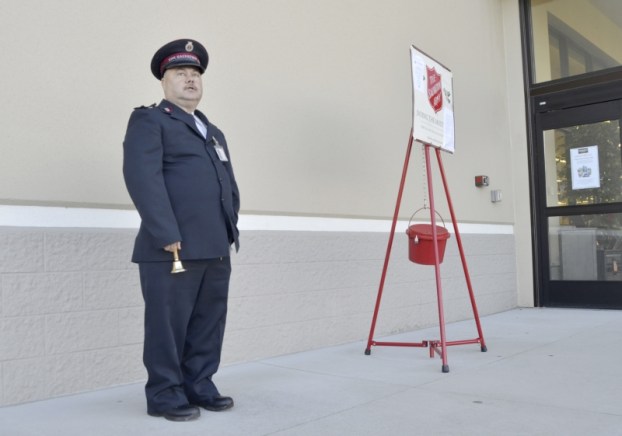 The Salvation Army of Rowan kicked off its annual Red Kettle campaign Friday which will last up to Christmas Eve. The campaign began nationally Friday with the kettle outside of Hobby Lobby. Money raised helps children and families in need. Shown here is Capt. Bobby Carr, who heads up the Rowan chapter with his wife, NaKisha. Shavonne Walker/Salisbury Post

SALISBURY — The soft chime of a single bell could be heard on the approach from the parking lot of Hobby Lobby. “Thank you” was the greeting as coins clinked to the bottom of the red plastic kettle.

Rowan County residents will see lots of these kettles at the entrance of many local businesses with proceeds to benefit local children and families in need.

“The money raised in the kettles is used to help those in need well into the new year. It is vital along with the support we receive from the United Way to our ability to provide assistance,” said Capt. Bobby Carr.

The Salvation Army Red Kettle campaign began Friday at Hobby Lobby locally as well as nationally. The campaign funds the organization’s Angel Tree program and supplements the agency’s budget through helping families with utility, food and other assistance needs.

Last year’s kettle campaign raised $48,717 for Christmas. The organization was able to help 400 families and several seniors with food boxes for about 2,000 people.

Over 10,000 people were served from January through October with social service assistance through food, rent, utilities, clothing and referrals in Rowan County.

“In conjunction with the Christmas Bureau thousands will be assisted at Christmas locally,” Carr said.

Contributions to the red kettle campaign will go a long way in making the holidays better for those who are worried about providing for their children at Christmas.

Anyone who would like to give to the campaign can also give online via wwww.salvationarmyusa.org and their donations can be earmarked as a one-time gift, annually, monthly or quarterly.

During this holiday season, all kettle donations can be made online or at a kettle site. No donations are collected door-to-door.

The program was started in 1891 by Salvation Army Capt. Joseph McFee in San Francisco. He wanted to provide a meal for 1,000 area homeless people, but had no money to fund it. McFee, a former sailor in England, remembered a pot that was at a boat dock that passersby tossed in coins for the poor.

He took the idea and raised money in an iron kettle for what would be the future Red Kettle campaign.

Contributions from the community to the kettle campaign enable the organization to continue its year-round efforts to raise money for those who would be otherwise forgotten.

By Rebecca Rider rebecca.rider@salisburypost.com FAITH — You can pick out most of the veterans at Faith Elementary’s veteran breakfast by their... read more