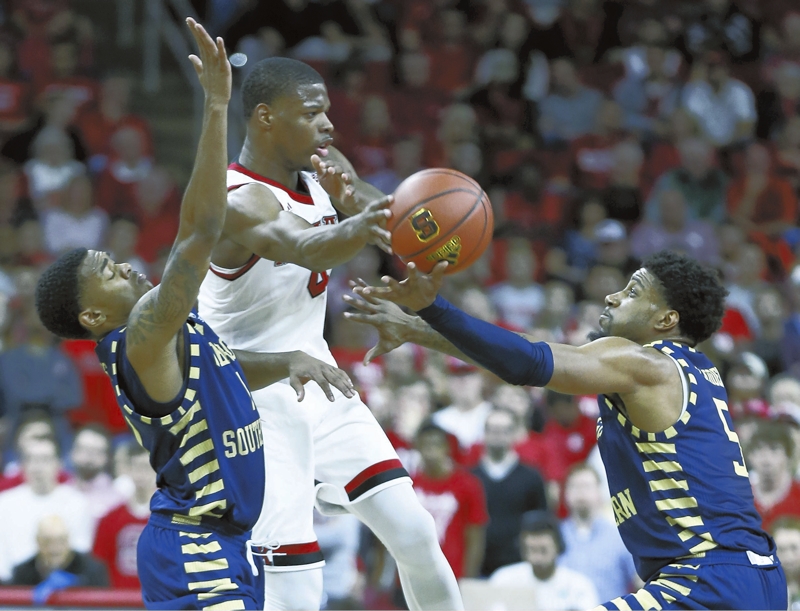 RALEIGH (AP) — It was supposed to be Dennis Smith Jr.’s coming-out party, but his fellow starters joined him as guests of honor.

All five starters scored in double figures for the Wolfpack, who won despite shooting 4 of 24 from 3-point range.

“We all made key plays down the stretch that we needed to win,” N.C. State guard Torin Dorn said.

“It can be anybody’s night,” Henderson said. “It doesn’t just have to be my night. It can be Torin’s night, Dennis’ night. We’ve got so many weapons.”

Tookie Brown had 26 points and a career-high 10 rebounds to lead Georgia Southern. Ike Smith added 20 points for the Eagles.

Smith, the highly touted freshman point guard, scored 11 points on 3-of-13 shooting from the field for N.C. State.

Georgia Southern led 66-60 with just over six minutes to play, but N.C. State answered with a 10-1 run to seize control.

N.C. State: The Wolfpack are off to a nice start after A rough beginning a year ago, when they dropped their opener and lost Henderson to a season-ending ankle injury just six minutes into the game.

The Eagles missed the shooting touch of guard Mike Hughes, who is suspended for the first three games after finishing second on the team in scoring last season. They made just 5 of 22 3-point attempts and 20 of 32 free throws. Still, Georgia Southern, which set a school record for 3-pointers a year ago, almost pulled the upset. “That was encouraging,” coach Mark Byington said. “We were close to winning in a different way than our normal recipe.”

N.C. State was even worse from 3-point range. The Wolfpack missed their final 16 3-point attempts, including all nine in the second half.

Smith threw a no-look lob over his shoulder to Abu for a two-handed dunk in the first half. The alley oop brought rap star J. Cole, a close friend of Smith, out of his courtside seat for a brief celebration. The play gave N.C. State a 30-20 lead, but the Wolfpack went without a basket for the next five minutes.

Brown, the reigning Sun Belt rookie of the year, provided a stiff test for Smith, the favorite to win the award in the Atlantic Coast Conference. Both guards wear No. 4, and both played 36 minutes. In addition to his efforts chasing down rebounds, Brown finished with three assists and no turnovers. Smith, who briefly left the game in the second half after taking a knee to his thigh, added five assists and just one turnover.

N.C. State freshman Ted Kapita has been ruled eligible for competition by the NCAA. N.C. State learned of the decision before the game. Kapita, a 6-8 forward from the Democratic Republic of the Congo, is eligible to play on Sunday.

N.C. State hosts St. Francis on Sunday in the season opener for the Terriers.