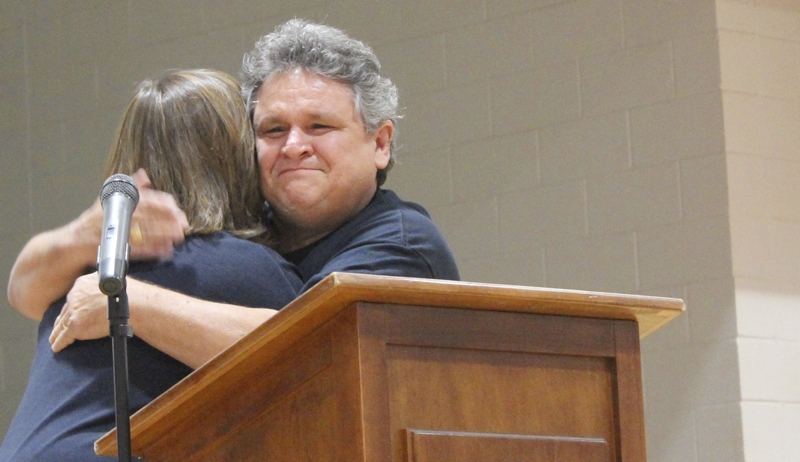 SALISBURY — It was in the midst of a turmoil-filled election that Salisbury Academy took a quiet moment to present former educator and piano-player extraordinaire “Dr. Rob” Robertson with the state’s highest honor. Head of School Beverly Fowler presented Robertson with the Order of the Long Leaf Pine during the school’s weekly chapel service on Nov. 3.

Robertson said he was shocked and humbled to receive the Long Leaf Pine.

The award, issued by the governor, is given to people who have a proven record of above-and-beyond service to state and community. Famous recipients include Billy Graham, Andy Griffith and Maya Angelou.

Salisbury Academy nominated Robertson for his role as an “ambassador of the arts.” Robertson, a former teacher and administrator in Rowan-Salisbury Schools, now teaches music at Salisbury Academy. He is also the founder of the Salisbury Music Conservatory, works as music director for Lower Stone Church and organizes benefit performances.

Robertson, originally from Iredell County, recently made a splash by running for the Rowan-Salisbury board of Education’s seat 7, representing the southeast — a race he conceded to incumbent Susan Cox Tuesday night.

He was born in Cool Springs, just a hop, skip and a jump down the road from Salisbury, and began playing piano in second grade. Robertson attended UNC Greensboro, where he studied music. He later went back to the school for his master and doctorate degrees. He worked for 30 years in local school systems and was named district Teacher of the Year in Iredell-Statesville Schools. He and wife Dana Robertson, juggle their lives between a home in Faith and one in Cool Springs. They have four daughters and one granddaughter.

Robertson spent the 1990s researching lifelong learning through music. His research was published nationally, and Robertson was selected to chair a national focus session on the subject at the Music Educators National Conference in Kansas City, Mo., in 1996. Robertson also served as a consultant to a Japanese educator for the research to be presented in Japanese publications.

Over the years, Robertson has performed hundreds of free benefit concerts at various community organizations. In 2009, Robertson raised nearly $2,000 in a single concert to benefit Habitat for Humanity of Iredell County. In April, he raised $6,000 to benefit Rowan Helping Ministries with a concert at the Meroney Theater.

He has also published a novel, “Icy Shadows.”

Some days, he said, he feels like he’s lived three lifetimes in one.

A lot of his work — such as the music conservatory and a good number of his benefit concerts — have “exploded” since Robertson teamed up with Salisbury Academy.

“They’ve given me a home,” he said of the school.

“There’s a time I’m gonna have to gear down, slow down — but not today,” he said.

He likes to joke that he retired and now has a 50-hour work week. But Robertson isn’t one for complaining. He’s always smiling and jovial — it’s something of a life philosophy.

“Don’t ever take yourself and the world too seriously,” he said. “Have a good sense of humor.”

He still can’t quite believe he was awarded the Long Leaf Pine — there are others who are better teachers than he is, he said. And ultimately, the award will make little difference to the students who troop through his “music cottage” at Salisbury Academy every day. Children don’t care about experience or awards — they care about the present.

“You’re only as good in a kid’s eye as the moment you’re in front of them,” he said.

For Robertson, making music is about love, and it’s about the community.