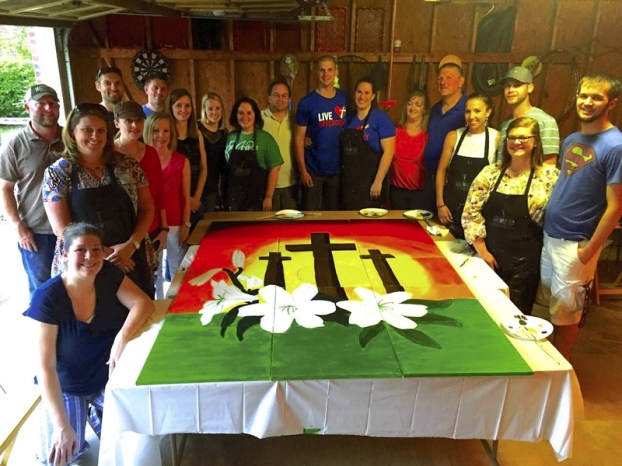 The 6-foot mural now stands among beautiful stained glass windows, ornate banners and a sculpture of Jesus in the sanctuary.

Are you creative? Do you write, paint, doodle, or build things? Do you in some way reflect the creative nature of God whose image is reflected in you?

I recently experienced a new creative and artistic trend sometimes called “wine and painting”.  Of course, the wine was optional. These events are sprouting up at galleries around the country. In this setting, individuals sit in front of a piece of stretched canvas and mimic each paint-filled stroke of an artistic teacher. The instructor demonstrates techniques while providing tips on things like texture and blending colors. It’s almost as simple as coloring by number, but the end product is often wall worthy and rewarding.

My expertise in art is limited to stick figures. So, when my wife asked if I would attend a Valentine’s Day wine and painting class in February, I reluctantly said “yes.” I was glad the artist wasn’t having us paint little Cupid figures shooting hearts with arrows. Instead, we were instructed to each paint half a sun and vines. This project was designed so that each painter’s canvas would be a mirror image of their partner’s canvas. In the center the vines twisted in a way that, when the canvases connected, formed a heart.

Though the Valentine’s theme of two paintings forming a heart seemed cheesy, it was actually easy, memorable, and fun. As I gazed around at the smiles on the faces in the room, it was evident that even those with little creative skill were enjoying the moment.

To be honest, I wasn’t excited about the idea of painting. I’m not a smell-the-roses-and-try-to-capture-their-beauty-on-canvas type of guy. But the artistic endeavor was better than expected. I might even do it again, just not too often.

As the pastor at St. James Lutheran Church in Rockwell, I was asked by an aspiring artist if we could organize a wine and painting party with the young adult group at church. A buzz around this idea developed. I began to consider how a painting event could engage people in their faith.

I called the Lettered Lily in Salisbury and they connected me with the artistic coach Heather Haagland. I asked, “If twelve adults sign-up, would you be willing to lead a painting party at my house?” She said yes. I continued, “Would you be willing to help us create one giant mural out of twelve canvasses instead of twelve identical small paintings?” Again, she said yes.

A few months later my wife and I prepared for a painting party at the Huebner house. We were going to paint a religious mural with three crosses and lilies standing in the shadow of the rising sun. We had to increase the size of the mural to allow for more painters. Over 20 adults from St. James signed up to paint, but we put a cap on 15 canvases so the mural wouldn’t be over 8 feet tall.

The painting party was a great opportunity for the young families of St. James to gather and exercise their God given creativity while creating religious artwork. It was a fantastic fellowship event.

The 6 foot mural now stands among beautiful stained glass windows, ornate banners, and a sculpture of Jesus in the church sanctuary. Other artwork, like photography, is also displayed regularly on new projection screens in the sanctuary. Next weekend, the new mural and new projection equipment will be dedicated during worship. But the focal point will not be the mural or media displays. The focus for St. James is the message that the center cross in the mural points toward. Jesus is the focal point. And that’s evident in the placement of the sculpture of the risen Christ who is elevated front and center above the altar with arms wide open. And now the new mural also points toward him.

People from the community and the pews of St. James are the ones who created the mural. And there’s always room for others to join us in creating artistic expressions that point others toward Christ. When we create together, help others together, and share our lives together, then the church becomes a living mural and beautiful tapestry. Then we do well reflecting the creative and loving image of our God.

The mural, painted by members of St. James Lutheran Church in Rockwell, is hanging in the sanctuary and will be dedicated, along with new projection equipment and other things, on Sunday.

Ann Farabee: In the waiting room

In the waiting room? Sometimes, a wait in the hospital ‘waiting room’ isn’t too bad – like when waiting for... read more