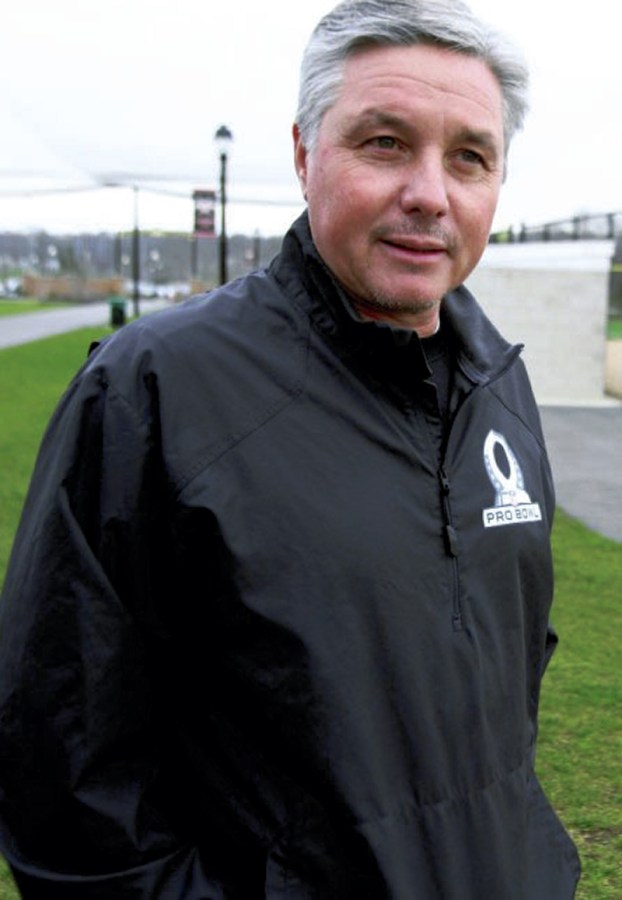 New Jersey.com ... Randy Brown, a Catawba College Sports Hall of Famer, has been the Baltimore Ravens’ kicking coach since 2008.

Nobody wants to see the outcome of an NFL game determined by a kicker.

The “real” football players fight for 60 minutes, only to have the smallest guy on the field decide the winner. But it happens every week and often doesn’t end well.

Midway through this season, seven teams have failed to win games because a kicker missed a field goal in the final 30 seconds or in overtime. Kickers also have missed 30 extra points.

The most glaring blunders occurred in Week 7 in overtime of the same game. Arizona’s Chandler Catanzaro had a 24-yard field goal clang off the left upright, and Seattle’s Steve Hauschka pulled a 28-yard attempt wide left. The teams tied 6-6.

A week later in London, Washington’s Dustin Hopkins missed a 34-yarder in OT and the Redskins and Bengals tied 27-27.

The Browns wouldn’t be winless if Cody Parkey made a 46-yarder at the end of regulation in Week 3. He also missed two other field goals in that game and Cleveland lost to Miami in overtime.

Considering the importance of field goals and the fact extra points are from a longer distance, this stat makes no sense in today’s NFL: one team, the Baltimore Ravens, employs a kicking coach.

The league has become so specialized that teams invest in sports science coaches, analytics assistants, football information managers and other gurus for various positions. The Cardinals have a “pass rush specialist” and the Chiefs have a “special projects coach” on board.

Yet only one team pays a coach to work solely with kicking specialists. Randy Brown, the mayor of a town in New Jersey, joined John Harbaugh’s staff in 2008 after stints with the Eagles and Bears. Under Brown, Justin Tucker has developed into the second-most accurate kicker in NFL history. He’s 34 for 34 this season (22 field goals, 12 extra points).

Tucker, punter Sam Koch and long snapper Morgan Cox have been to the Pro Bowl under Brown’s guidance.

“Randy is one of the most important people around the building,” Tucker said. “What he does is unmatched around the league. The production speaks for itself.”

Brown spends two days at practice with the Ravens and also goes to games. He coaches Tucker, Koch and Cox the same way other position coaches work with their players. That allows Ravens special teams coach Jerry Rosburg to focus on coverage, blocking schemes and returns.

“What we do is technical, it’s finite,” Tucker said. “The success comes from having an attention to detail that Randy and Jerry have been good about instilling in all of us. It’s something we build on every single day.”

Teams have no limits on the size of coaching staffs. Some positions have two or three different coaches.

Yet kickers get no love. They’re left alone to figure out their mechanics, timing and everything else to make that crucial kick.

Sure, every team has a special teams coordinator and several teams also have an assistant to help. But they don’t work closely with the kicker, punter and long snapper.

“It’s mind-blowing that more teams don’t have kicking coaches,” said David Akers, a six-time Pro Bowl kicker during 16 seasons in the NFL. “There has to be a value teams place on teaching specialists. You can have a guy with the strongest leg in the world, but the whole operation has to be perfect. The snap, the location, the hold have to be perfect or leg strength doesn’t matter.”

Akers spent time during training camp visiting the Ravens. Harbaugh was Philadelphia’s special teams coach for several years when Akers played for the Eagles, and Brown coached him in 2004-05.

“The Ravens are so precise with everything,” Akers said. “They have it down to an exact science with Randy and that’s why their guys are so good.”

The Titans had an assistant who specifically worked with the kicking group, Steve Hoffman, before he was promoted to special teams coach in October. Hoffman began his coaching career as the kicking coach for Dallas in 1989 and held the job for 16 years while also performing other duties on special teams.

“If you get a little out of whack one way or the other, he’s got a great eye to be able to see, ‘Hey you’re doing this, maybe try this,’ “ Titans kicker Ryan Succop said.

Former Cowboys kicker Chris Boniol served as the kicking coach in Dallas from 2010-2013. He worked a few seasons with Dan Bailey, the most accurate kicker in NFL history.

“Anytime you can bounce ideas off somebody that’s been in your shoes before, I think you can only benefit from that,” Bailey said. “It was great to have him be a mentor.”

Many kickers, punters and even long snappers work with independent coaches in the offseason. They break down film and analyze technique. It’s still not the same as having a coach monitoring them every day during the season.

“Honestly, I think it depends on the situation,” said Hopkins, who gets together with a group of specialists to work with Jamie Kohl in Wisconsin during the offseason. “For some guys, that’s a really healthy environment for them to constantly be on top of their stuff. And other guys might do better without it.”

“Are you going to pay them enough to leave what they do now?” Sturgis said. “The real money for kicking coaches is working with high school players who are trying to get college scholarships. And, how long are you good for? If your kicker struggles for a year, do you get fired? So, is it worth it for these guys?”

Akers said former kickers like Boniol would be ideal for these jobs if it makes sense for them to do it.

“Is it worth moving your family when other position coaches are likely getting much more to do their jobs?” Akers said.

Whatever it costs, teams ought to know it’s worth the wins.

No contest: No. 1 Duke routs Marist