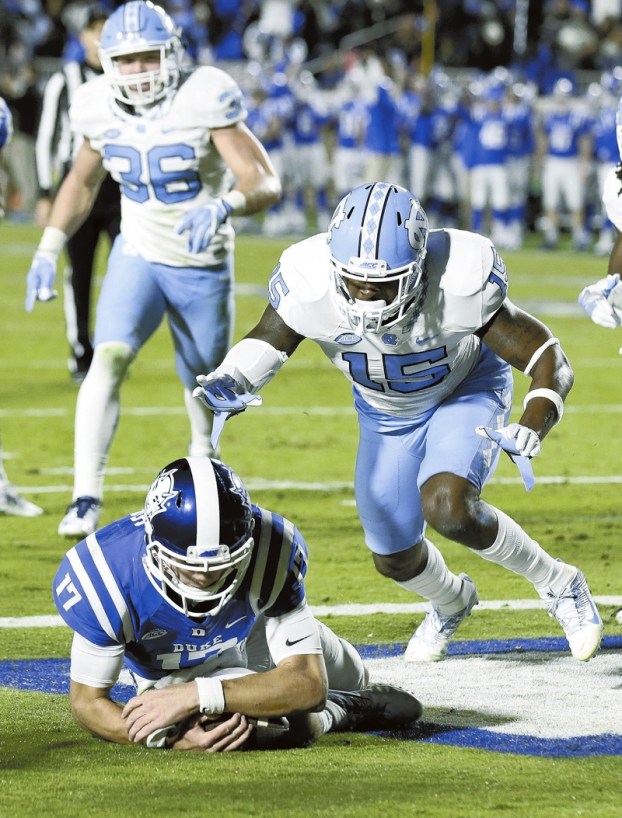 AP Photo/Gerry Broome ... Duke quarterback Daniel Jones (17) falls on a fumble in the end zone to score a touchdown as North Carolina’s Donnie Miles (15) looks on during the first half of Thursday night’s college football game in Durham. Duke won, 28-27.

DURHAM (TNS)  — Duke reversed all kinds of streaks in its 28-27 win over No. 17 North Carolina on Thursday, the second times the teams have met on that day.

The Blue Devils stopped a three-game losing streak, picking up their first ACC win against an impressive UNC team (7-2, 5-2) that fell out the race for the Coastal Division title. The Blue Devils beat a ranked opponent for the first time since September 2015.

They won back the Victory Bell by playing standup defense when it counted and thanks in part to the performance of their young quarterback.

Daniel Jones threw long and short. He ran far and wide. The redshirt freshman found seven targets on his way to a 22-of-34 night, when he finished with 240 yards.

For the second straight week, Jones ran in a pair of touchdowns. He finished with 94 rushing yards, including a 29-yard pickup on third-and-3 to start the fourth quarter.

His pass on fourth-and-7 that possession fell short near the goal line, but Duke’s defense gave Jones and Co. one more opportunity. But, a one-point lead was enough in the waning moments of the 103rd game of the series; UNC won the last two, combining for 111 points in those two wins.

With 3:49, Jones found T.J. Rahming for a 19-yard gain to convert a third down. Jones wound up punting to end that possession, setting UNC up at its own 6 with 1:51 to play.

The defense needed one more big play to help seal it, and junior defensive back Alonzo Saxton II delivered.

Just 1:02 left on the clock, UNC quarterback Mitch Trubisky scanned the field and lofted the ball up the middle, right into the arms of Saxton. It was Duke’s second interception of the game, the first when Deondre Singleton picked off Trubisky in the third.

The Blue Devil stood up tall at the ends of the second and third quarters to limit an efficient UNC offense. Duke (4-6, 1-5) forced UNC to punt in the Tar Heels’ final two possessions of the second quarter, heightening the pressure after a timeout with 1:08 left. The Blue Devils came back on the field, broke up a Trubisky pass, caused another incomplete pass byway of a quarterback hurry and forced UNC to punt after a sack. The score was tied at 21 at halftime.

Duke has been to a bowl game every year for the last four. Duke moved to within a win of bowl eligibility with the victory. They’ll face Pitt then Miami on the road to close out its regular season.

And it’s first ACC win, over a ranked, good, North Carolina team, is a major momentum.

7: Yards Ben Humphreys knocked Trubisky back on a sack at the end of the first half. With UNC’s ability to drive quick, the defense turned up the pressure to keep the score tied going into the locker room.

Panthers hope to do what Chiefs did last year