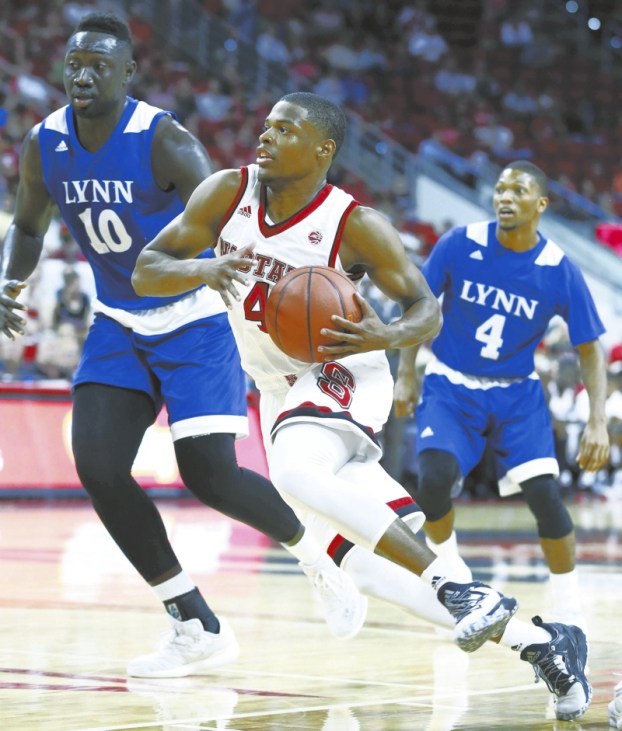 RALEIGH (AP) — Dennis Smith Jr. has heard all the people expecting brilliance from him before he’s even played a game at North Carolina State — even from his own coach.

The touted freshman point guard isn’t afraid of those high expectations entering his regular-season debut Friday night against Georgia Southern, though he won’t dwell on them, either.

“I’ve got to tune it out,” Smith said. “If I just embrace all the good and no negative, then my ego will get too big. If I embrace all the negative with no good, then I’ll get down on myself. I just take everything in stride, don’t pay too much attention to it and just remain humble with everything I do.”

The 6-foot-3 instate five-star recruit from Fayetteville and possible one-and-done NBA prospect enrolled in January as he rehabilitated a serious knee injury , then spent the summer pushing to be fully recovered from that torn left anterior cruciate ligament suffered in August 2015.

Smith looked sharp in two exhibition games, including 24 points and six steals against Barton on Monday.

Sixth-year coach Mark Gottfried hasn’t tried to lower expectations. During the team’s preseason media day, he said he believes Smith is the best guard in the country and could be the No. 1 overall NBA draft pick with a great year.

“I think Dennis can handle it but I also believe in it and he knows I believe that,” Gottfried said this week. “He and I have talked about that many times. I think with Dennis, he’s the kind of player that likes the challenge, he thrives on that. He wants to live up to that, whether I’ve said it or not. He wants to be that guy.”

Smith headlines a top-10 recruiting class that includes five-star Turkish big man Omer Yurtseven , who will sit the first nine regular-season games following an NCAA review of his amateur eligibility status. That class along with some veteran returnees has the Wolfpack picked to finish sixth in the Atlantic Coast Conference and positioned to get back to the NCAA Tournament after missing the postseason last year for the first time under Gottfried.

Smith was the preseason pick for league rookie of the year as well as the all-ACC first team.

Smith was asked at last month’s ACC media day in Charlotte how he’d handle critics saying he had a bad game anytime he didn’t put up huge numbers.

“I don’t worry about that and I’m going to tell you why,” Smith said. “That doesn’t matter to me because I believe if you would say something like that, then you can’t know too much about basketball. You’ve got to be just like a Twitter guy that just wants a reaction.”

Teammate Abdul-Malik Abu is sold on Smith’s approach. He’s taken to calling him by a nickname sure only to boost expectations even more.

“I’m not going to say he’s going to go out there and be perfect,” Abu said. “Nah, not looking for perfect. As a team and a family, we’re looking to be successful. We’re looking to win.

“I call him ‘The Chosen One’ because that’s what I think he is. He has to show it to you guys, but he proved it to me a long time ago.”

NO. 6 UNC TO BE WITHOUT ASSISTANT COACH FOR 2 ROAD TRIPS

CHAPEL HILL (AP) — Veteran North Carolina assistant coach Steve Robinson will not travel with the sixth-ranked Tar Heels for their first two road trips because of a blood clot in his leg.

Coach Roy Williams made the announcement Thursday, a day after doctors told Robinson not to fly after finding the clot.

The Tar Heels open the season Friday night at Tulane, and visit Hawaii on Nov. 18 before playing in the Maui Invitational on Nov. 21-23. Williams says Robinson will be on the bench as usual for the two home games in between, against Chattanooga on Sunday and Long Beach State on Nov. 15.

Robinson — a former head coach at Tulsa and Florida State — is in his 14th year at UNC and his 22nd year assisting Williams.

RALEIGH (AP) — There will be some familiar faces roaming new sidelines in college basketball this week.

The season’s tipoff Friday marks the debut of several coaches with new programs after the latest round of offseason hirings and firings. That list includes eight coaches at power-conference schools, along with a well-traveled coach looking to take yet another team to an NCAA Tournament.

Here’s a look at some of the notable changes:

After seven seasons at Memphis, new Georgia Tech coach Josh Pastner replaced Brian Gregory at a program that hasn’t been to the NCAA Tournament since 2010.

“When I took over, (athletic director) Mike Bobinski looked me in the eye and said, ‘We’re going to hit the restart button — we’re blowing this up. You’re going to start it from ground zero,’” Pastner said at ACC media day.

Compare that to Pittsburgh’s Kevin Stallings, who left Vanderbilt after 17 years to replace Jamie Dixon. The Panthers have been to the NCAAs for 13 of 15 years, though they could use a jolt after three straight 10-loss seasons.

“We’ve hit the ground running as fast as we can,” Stallings said. “Some days that feels like a crawl, and some days it feels like a sprint.”

Rutgers is hoping Steve Pikiell can figure out a way to make the Scarlet Knights competitive.

The former Stony Brook coach leads a program that hasn’t had a winning record since 2006 nor an NCAA trip in a quarter-century. After winning seven games and going 1-17 in the Big Ten under Eddie Jordan, the Scarlet Knights open against Division II Molloy.

Underwood arrives from Stephen F. Austin to replace Travis Ford after a 12-win season. The Cowboys open against Campbell on Friday.

TCU welcomes Dixon back to his alma mater after a 13-year run at Pittsburgh. The Horned Frogs, who haven’t been to the NCAAs since 1998, open Friday against St. Thomas.

And at Texas Tech, Beard — the former Arkansas-Little Rock coach who spent less than two weeks in April as UNLV’s coach — takes over a Red Raiders program coming off its first NCAA trip since 2007. The Red Raiders face Houston Baptist on Friday.

With Stallings’ departure to Pitt, Bryce Drew is trying to give Vanderbilt a fresh look.

The Commodores were picked to finish sixth in the Southeastern Conference. And while Stallings was the program’s winningest coach, Drew’s program has seen a drop in home attendance in recent seasons.

The former Valparaiso coach said last month the goal is to “work extremely hard” and play an exciting style, starting against Marquette on Friday in Annapolis, Maryland.

The former North Carolina assistant turned UAB into a 20-win program with an NCAA Tournament upset of No. 3 seed Iowa State in 2015 during his four seasons. Now he takes over a Cardinal program that went to one NCAA Tournament in eight seasons under Johnny Dawkins.

“As a coach, it’s hard because we’re trying to install everything and move quickly,” Haase said at the league’s media day. “But our attitude has been trying to build a foundation and move slowly with our base offense, and our base defense.”

Stanford, picked 10th in the Pac-12, opens against Harvard on Friday in Shanghai, China.

Tubby Smith has a new project at Memphis. The well-traveled coach who has won 557 games and the 1998 national championship left Texas Tech after becoming the second coach to take five programs to the NCAA Tournament. HIs first game is Monday against Texas-Rio Grande Valley.

Out west, UNLV is on its third coach of the calendar year with Marvin Menzies. The Runnin’ Rebels fired Dave Rice in January and hired Beard before he quickly bolted for Texas Tech. Menzies, a former UNLV assistant who led New Mexico State to five NCAA Tournament trips in nine seasons, opens his UNLV tenure Friday against South Alabama.

At Santa Clara, Herb Sendek arrives after stops at Miami (Ohio), North Carolina State and Arizona State over the past two decades. The Broncos open Friday against Northern Arizona.

By Jessika Morgan The Raleigh News & Observer DURHAM (TNS)  — Duke reversed all kinds of streaks in its 28-27... read more