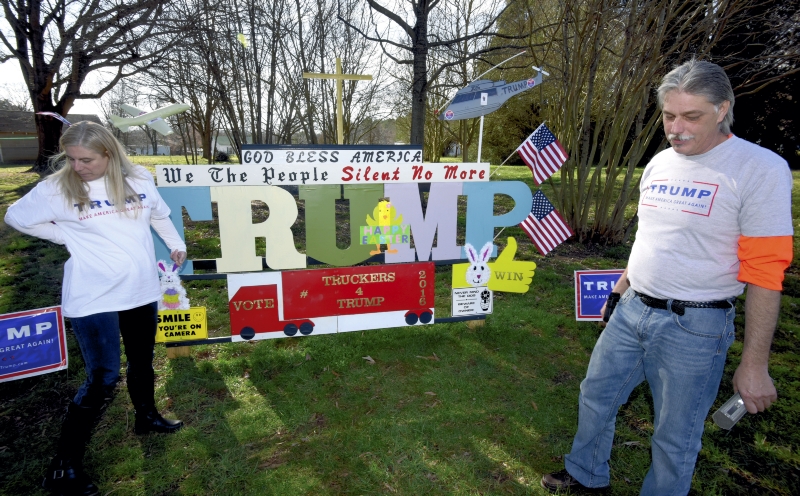 Earlier this year, David Fitzgerald and Theresa Tiano update their large Trump sign to reflect the Easter season. After having the sign up in their yard since the Republican primaries, the couple took it down Wednesday, after Donald Trump won the presidency of the United States. Jon C. Lakey/Salisbury Post

SALISBURY — It all went according to plan for David Fitzgerald and Theresa Tiano.

More than a year ago, Fitzgerald built a 5-foot-tall, 12-foot-high sign to show off his support for Donald Trump, then just a candidate in the Republican primary. Fitzgerald and Tiano, who live just north of Salisbury, painted the sign and occasionally added and removed decorations to reflect holidays and various seasons.

From its creation, the sign attracted significant attention. Motorists frequently honked car horns in support. Some stopped by to take a picture. It even attracted vandals.

Trump’s chances of winning the Republican nomination grew and the pair of Trump supporters maintained the sign. In a March interview with the Salisbury Post, the couple confidently said they would take the sign down when Trump became president. After waking up on Wednesday and learning the results, that’s exactly what they did.

On election day, Fitzgerald and Tiano didn’t stay up late to listen to results. Instead, they woke up shortly before 6 a.m. to discover a pleasant surprise. Trump, a New York businessman, has been elected president. By 11 a.m. the famous Trump sign had been disassembled.

“To be quite honest, I’m glad the sign is gone,” Fitzgerald said. “It did what it was supposed to do. I think that sign made it OK for a lot of people to express their support to Trump.”

Fitzgerald and Tiano said they always felt that Trump would come out victorious.

“We met so many people that were closet Trump voters, but they were afraid to say because they didn’t want to be chastised,” Fitzgerald said.

Pollsters didn’t expect Trump to pick up a victory in North Carolina, which he won with 49.9 percent of the vote. He picked up other, unexpected states too. By early Wednesday morning, Trump was declared the victor in a divisive 2016 presidential campaign.

The presidential campaign has left Trump supporters and Republicans in Rowan excited about the future. Some Democrats say they’re patiently waiting to see how he’ll fare once sworn into office. Others are worried about what the country might look like with Trump at the helm.

“I knew he was going to win because he was the right candidate for this particular race,” Fisher said. “I think he will do quite well in office and this will be a new awakening, the second American revolution. We are going to try to put the people back into the Constitution … I’m excited about the future of our country.”

“There are just a whole litany of things that I feel excited about,” Kidd said.

Local business owner Don Vick, a Republican, mentioned a minimum wage hike as one reason he’s excited Trump, not Democratic presidential nominee Hillary Clinton — who called for an increase in the minimum wage — will serve as America’s 45th president.

“I feel inspired by what we may be facing coming up for me and my children,” he said.

Curiosity and uncertainty tempers the elation for some. It creates fear for others.

Fisher said she’s looking forward to see what Trump’s policies will be on commerce, but her curiosity is hardly enough to change her feelings.

Power Curbers President and CEO Dyke Messinger didn’t say who he voted for. Instead, he weighed the pros and cons of a Trump presidency on business. On taxes, for example, Messinger said cuts would be a “quick way to generate economic activity.” At the same time, tax cuts would likely increase America’s spending deficit, Messinger said.

Trump’s plan to “rip up” the Trans-Pacific Partnership would hurt businesses, Messinger said.

Trump has talked about investing in infrastructure. Power Curbers, which builds equipment used to create roads, stands to benefit if there’s significant investment in the country’s infrastructure, Messinger said.

With Trump as president, Messinger said there’s reason to be optimistic about the future of health care. Messinger mentioned the Affordable Care Act as being responsible for skyrocketing premiums. He also rattled off a number of questions about what a Trump president may look like.

“He’s just such an unknown,” Messinger said. “With Donald Trump, there are things that are just absolutely uncertain.”

Rowan Democrats Chairman Geoffrey Hoy echoed the uncertainty, but said voters should give Trump a chance to govern.

Eva Knight, a Clinton supporter, said she’s always optimistic. Knight said she believes Trump, once he takes office, will transition away from the controversial, sometimes provocative statements, he was known for during the campaign.

Salisbury native Annie Cardelle, who received nationwide attention for her “Latina contra Trump” stunt during a Trump event, was hesitant to express any optimism about a Trump presidency.

“I didn’t feel like his election was a total shock, but it was like a realization that, you know, people of color’s words weren’t heard or respected,” Cardelle said. “The man insulted half of this country and became president. I hope he goes towards the middle, but we won’t know until January. It’s just so overwhelming.”

She questioned whether minorities, the LGBTQ community and Americans who follow Islam would be safe.

After the initial surprise and, later, disbelief, Trump’s election is now considered a safe bet. As of Wednesday afternoon, he had secured enough states to top the required mark of 270 electoral votes. However, the electoral college will need to affirm the Nov. 8 election results.