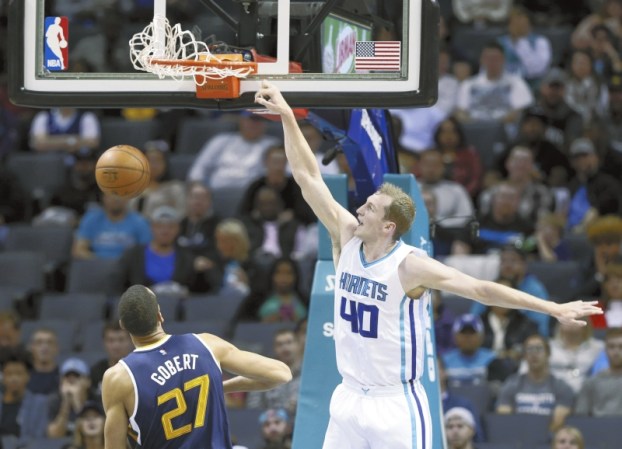 CHARLOTTE (AP) — They have been dubbed “Bench Force One.”

Charlotte’s pesky, hard-nosed group of backups is paying big dividends for the Hornets early this season. They outscored Utah’s reserves 41-20 in a 104-98 victory over the Jazz on Wednesday night.

Kemba Walker scored 21 points and Marvin Williams had 19 for the Hornets, but it was the play of Marco Belinelli, Frank Kaminsky, Spencer Hawes and Ramon Sessions off the bench that proved to be the difference as Charlotte stretched its winning streak to four games.

Belinelli and Kaminsky had 13 points each and Hawes added 11.

“They’re good players. They fit together well,” Jazz coach Quin Snyder said. “They have an identity off the bench with that group. They go to Marco coming off screens and he’s hard to guard and then they post Kaminsky and Sessions in the pick and roll.”

Kaminsky, by far the youngest of the crew in just his second season, shook off a viral infection to post a big night.

Charlotte trailed most of the game, but he made an inside jumper to give the Hornets a lead with 7 minutes remaining that they wouldn’t relinquish. He later knocked down a 3 from the top of the key.

“We talk about coming off the bench and providing energy,” Kaminsky said. “We know it all starts with defense and letting that lead to offense. It looks like we’re doing a great job. It’s been so much fun so far this season.”

Charlotte’s reserves are averaging 39 points per game this season despite Roy Hibbert and Jeremy Lamb being out with injuries.

“It’s all about winning,” Belinelli said. “I think the guys from the bench, we try to bring energy on the court, we try to play together.”

The Hornets (7-1) have the second-best record in the East behind the NBA champion Cleveland Cavaliers.

The Hornets overcame a solid effort from Jazz guard Gordon Haywood, who finished with 29 points and seven rebounds. Rodney Hood had 20 points and Derrick Favors added 16 points and 10 rebounds.

Jazz: George Hill, who came in averaging more than 20 points per game, was unable to play due to a sprained right thumb.

Hornets: Coach Steve Clifford said he’s optimistic Hibbert will able to return Friday night. He’s missed the team’s last five games with right knee soreness. … Walker has scored in double figures in all seven games. … It won’t show up in the stat sheet, but Hornets C Cody Zeller battled hard in the paint and drew three fouls while battling for an offensive rebound.

Snyder wasn’t upset the Jazz attempted 34 shots from beyond the 3-point arc. He just wasn’t thrilled that they missed 26 of them.

“We’re not a team that takes bad 3’s, so if we are taking that many it’s because they’re open,” Snyder said. “Some of them were good, clean looks and we just have to make them. Those are shots that we want to take.”

The Jazz kept Walker in check most of the game, but the East’s third-leading scorer at 24.3 points per game began to find his touch in the fourth quarter.

“He started to bang some shots on us, but over the course of the game I thought we were really good against him,” Hayward said. “At the end of the game they just got in a groove, they got in a good rhythm.”

ON THE ROAD AGAIN

Joe Johnson isn’t blaming the schedule for the Jazz’s 5-4 start. Utah has played six games on the road this season.

“That has nothing to do with it,” Johnson said. “We controlled the most portion of the game, just in that second half, especially the fourth quarter, we just kind of let it get away from us.”

Jazz: The Jazz, who are 3-3 on the road, travel to Orlando to take on the Magic on Friday night.

Hornets: The Hornets will wrap up a three-game home stand on Friday night when they host Toronto.

By Mike London mike.london@salisburypost.com Prep football notebook … Footballs may not be in the air at Carson, but love is.... read more