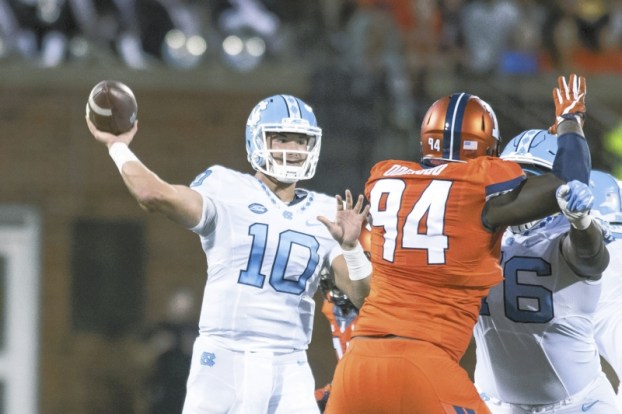 DURHAM (AP) — Elijah Hood is focused on finishing strong for No. 15 North Carolina.

The junior has two straight 100-yard rushing performances entering Thursday night’s rivalry game at Duke, a sign he is healthy after missing a game due to an apparent concussion that had followed a slower-than-expected start to the season.

“It’s good to see him running like the (No.) 34 we know,” quarterback Mitch Trubisky said.

Hood was the Atlantic Coast Conference’s No. 3 rusher last year with 1,463 yards and 17 touchdowns for the Tar Heels (7-2, 5-1 ACC), averaging 104.5 yards per game. He is a physical runner unafraid of contact. But he got off to a slow start by averaging 61.5 yards through his first six appearances, and also sat out UNC’s 34-3 loss to Virginia Tech played in the driving rain of Hurricane Matthew.

After a quiet return against Miami, Hood broke out for 107 yards and a score at Virginia, then ran for a season-high 168 yards and three touchdowns last week against Georgia Tech.

“I feel more explosive I think, just quicker, so that definitely helps when you try to run the ball,” Hood said. “I felt like I hit the holes a lot quicker this week. Whenever I try to get my momentum moving that much faster, I’m able to get more yards just per carry.”

The Tar Heels are trying to stay with the Hokies atop the league’s Coastal Division, though they need Virginia Tech to lose once to be back in control of their own destiny.

The Blue Devils (3-6, 0-5) are flirting with their first winless season in ACC play since 2007 after winning at least six games in four straight bowl seasons. The past two losses have both come by three points, including last weekend’s 24-21 loss to the Hokies that included having a blocked field goal returned for a touchdown.

“We are 3-6 for a reason, you have to look at why,” Duke coach David Cutcliffe said. “But you don’t whine or you don’t complain. You just pick the things to work on. You pick the things you believe are going to make a difference.”

Some other things to know about Thursday’s UNC-Duke game:

TRUBISKY IN CHARGE: Trubisky ranks as one of the national leaders in completion percentage, passing efficiency and average passing yardage for UNC. “He manages every aspect of their game,” Cutcliffe said. “There’s not a throw he can’t make.”

QB PRESSURE: The Blue Devils rank among the ACC leaders in sacks (27), so their defensive front will need to get some pressure on Trubisky. Meanwhile, the Tar Heels rank near the bottom of the league with 18 sacks and have had games where they struggled to get pressure on the passer. They’re facing a quarterback in Daniel Jones who has run for 169 yards in the past two games.

SHORT TURNAROUND: The teams had to cram in a week’s worth of game prep along with treatment of nagging injuries into a five-day schedule following last weekend’s games. “Come Thursday, the adrenaline’s rushing,” Duke defensive tackle A.J. Wolf said, “You’re playing football, everything feels good.”

WILSON’S STATUS: Shaun Wilson, Duke’s No. 2 rusher, is probable with what the school called an upper-body injury.

VICTORY BELL: The winner gets the Victory Bell, though there was nearly a break with the tradition of the winner spray-painting its shade of blue on the bell’s cart. UNC athletic director Bubba Cunningham said earlier this week he conferred with Duke AD Kevin White before putting a permanent design that split the cart with both team’s colors and logos. But Cunningham reversed himself after fan outcry, saying in a statement from the school Wednesday that painting would go on as usual for the winning team. After the last game in Durham in 2014, UNC had to pay for about $27,000 in paint-related damages to the visiting locker room and practice field from its celebration.