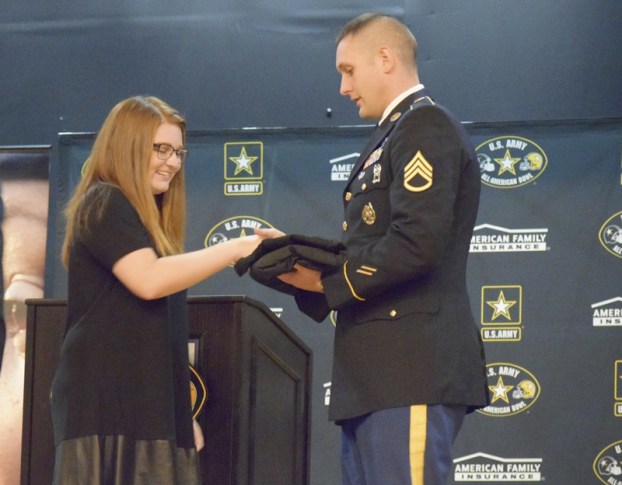 Katie Howard, left, recieves a jacket from a member of the U.S. Army All-American Marching Band selection tour. Katie, a senior at East Rowan, is one of 125 students in the nation chosen to participate in half-time performance of the All-American Bowl in January. Rebecca Rider/Salisbury Post

She called the selection “one of the biggest events in the history of our school.”

Howard was honored at an assembly Monday morning, where a selection tour committee officially invited her to participate in the band and presented her with a jacket. Howard will receive a full marching band uniform when she reports to San Antonio, Texas, for the Jan. 7 performance.

When she sent in her audition tapes in May, Howard never imagined she’d be selected. East Rowan Band Director Emily McNeil said that she encourages students to audition for as many opportunities as they can — because you never know when something will happen.

“I always tell them to knock on all the doors, and some of them will open,” she said.

McNeil nominated Howard and three other students for the All-American Marching Band, but Howard was the only one to be selected. She had to send in a recording of her playing trumpet, a video of her marching and playing and a personal statement. Howard said she stayed late at school that day, working hard to get clips that she was proud of. It was an experience she described as “nerve-wracking.”

“It’s not every day you get to do something like this,” she said.

This is Howard’s seventh year playing the trumpet — an instrument she picked out during a band preview in middle school.

“I don’t know, something just drew me to the trumpet,” she said.

She said she loved the sound, and thought the loudness of the instrument fit her personality.

The first time she tried to play it, she and one of her younger brothers sat on the floor of her room giggling. Howard said it sounded ridiculous.

In those early days, Howard’s beagle, Max, would stand on her instrument case and howl at her while she practiced. Or she’d stand in the stairwell at home, trying to make the instrument blare as loud as she could until the sound echoed through the whole house.

Over the past seven years, Howard has served as the president of the Tri-M Music Honors Society, a marching band drum major, trumpet section leader, lead trumpet in the school’s jazz band, a member of the school’s wind ensemble and has completed two internships — one at East Rowan, and one at Erwin Middle.

“It is hard to let you know how proud I am of you,” McNeil said of Howard Monday.

Howard wants to study music education at the University of North Carolina at Greensboro, and hopes to become a band director. She was also selected to perform in the Carnegie Hall Honors Performance Series in February as part of the symphony orchestra.

Howard said that she wouldn’t have made it without band mates, band directors and family.

“I could never thank them enough,” she said.