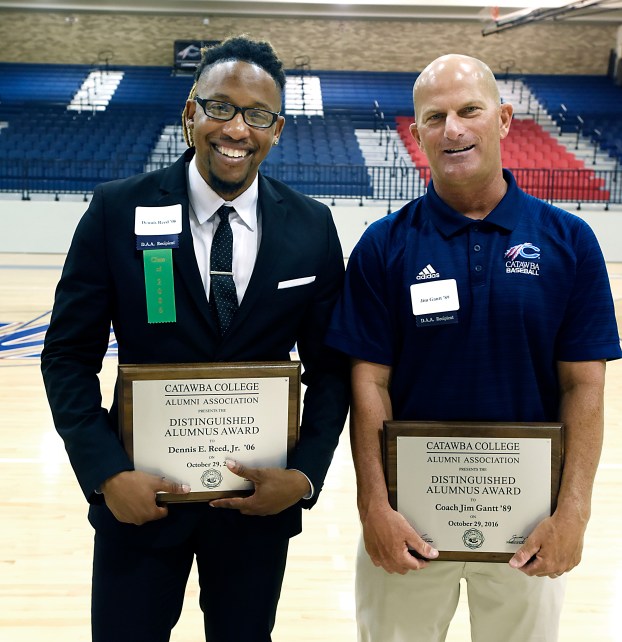 Two Catawba College alumni were recognized as recipients of a Distinguished Alumnus Award on Oct. 29 during Homecoming weekend activities. The honorees included Jim Gantt ’89 of Salisbury and Dennis Reed ’06 of Charlotte.

These awards, given annually by Catawba’s Alumni Association, recognize individuals who have served their community, distinguished themselves in their profession, and have served the Catawba College community.

Catawba President Brien Lewis made the presentations during a traditional barbecue luncheon held in Goodman Gymnasium before the football game. He was assisted by the President of the Alumni Association Board of Directors, Sandy Moore ’99 of Salisbury, and Vice President for Alumni Records and Recognition Committee, Sarah Devlin Walker ’12 of Salisbury.

Jim Gantt is the head coach of Catawba’s baseball team, a position he has held since 1996. In that role, Lewis said, “Jim has helped positively shape the skills and character of hundreds of young men.” His teams have been winners in the conference, the region and have gone on to play in the College World Series. Some individuals on Gantt’s collegiate teams have also gone on to play professional baseball, including most recently Jerry Sands who has seen action with the Dodgers, the Indians and the White Sox.

When Catawba’s baseball season concludes, Gantt coaches Rowan County’s American Legion Post baseball team. A former Legion ball player himself, Gantt was recognized for his commitment to Legion baseball by being inducted into the N.C. American Legion Baseball Hall of Fame in 2014.

Gantt majored in sports management at Catawba and was a four-year starter on the baseball team while a student. His all-conference performance helped take Catawba to the 1988 Carolinas Conference Championship and to the NAIA District 26 Tournament.

A native of Newton and a graduate of Newton Conover High School, Gantt is married to the former Adrian Whitley, a ’98 alumna of Catawba. The two are parents of daughter Blakley and members of Wittenburg Lutheran Church.

An accomplished musician, Dennis Reed is the founder of a non-profit organization in Charlotte, Inspire the Fire which inspires positive change in youth ages 10-21 through faith, fun and the arts. In that role, he has distinguished himself in two fields, music and service, since his graduation from Catawba, Lewis said.

Reed majored in Music Business while a student and found success before his graduation. He was the first place winner of the BMI Foundation’s ninth John Lennon Scholarship Awards in 2006, beating out more than 1,200 other college songwriters. Just a year after graduating from Catawba, he was a finalist in the International Songwriting Competition (ISC).

His leadership and inspiration were so successful with Inspire the Fire that in 2012, he was selected by the America’s Got Talent judges, along with his Inspire the Fire troupe, to move on from Las Vegas to the next round of competition in New York.

His successful ability to connect with people through music, his faith and the arts has been widely heralded. He has been featured in full-page articles in “The Charlotte Observer” and was named Community Leader of the Year by the city of Charlotte in 2015. When Democratic Presidential Candidate Hillary Clinton visited Charlotte in October of this year, Reed was one of nine young African-American leaders she tapped to meet with to gain insights on community and race relations there.

Earlier this year while touring with Fantasia Barrino, one of Reed’s original compositions, “Necessary,” a gospel about triumphing over suicide, was recorded by Fantasia on Facebook Live. That video was viewed over 11 million times and Reed’s song on iTunes was instantly elevated to the number one downloaded song in the world on the site in one day.

Reed serves as a Young Artist in Residence and an adjunct instructor of music at Catawba. He directs the gospel choir and Urb’n Sol, one of Catawba’s Vernaculars groups.