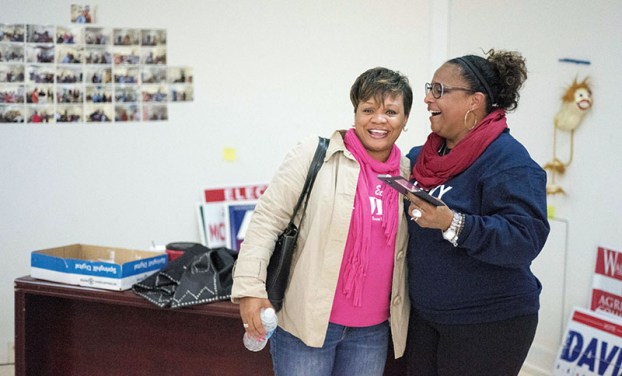 SALISBURY —Josh Wagner, Alisha Byrd and Susan Cox took home solid victories in the three races for seats on the Rowan-Salisbury Board of Education, getting leads early and holding on.

Earlier in the evening, challengers Andrew Poston and Michael Julian sat in the old JC Penney’s at West End Plaza and watched as the votes trickled in.

At the time, the graduate student was 30 points behind incumbent Cox for the Rowan-Salisbury Board of Education’s seat 7, representing the southeast. His final vote total was 11,618, well behind Cox.

Cox stole the show in the southeast, staying far ahead of Poston, who earned 22.05 percent of the vote, and music educator Dr. William “Rob” Robertson, who earned 23.91 percent. She charged out of the gate with 54 percent in absentee and early votes, and kept that 30-point lead for the rest of the night, ending up with 28,336 total votes.

It was a trend marked the entirety of Tuesday night’s race: winners gained leads early with early and absentee votes, and kept them.

But the race was closer in the East district, with Michael Julian, a shipping and receiving manager with Packaging Corporation of America, coming up hard behind current Board of Education Chairman Josh Wagner with 47.04 percent of the vote (23,921 votes) compared to Wagner’s 52.30 percent (26,594 votes). Wagner, 34, led the vote in Salisbury and western precincts, but lost ground to Julian in his eastern home.

When asked, Wagner, a sales representative with Kaeser Compressors, said he thought that Julian’s time living in the area and his connections to East Rowan High School helped him bag the eastern precincts.

Julian, 51, and Poston declared their candidacy in spring, after the board heard a proposal that recommended closing six area elementary schools. Both candidates ran with their opposition to school consolidation and county-wide busing as their core issue.

Julian said he was disappointed that he didn’t win, but was pleased with the support he received in the north and east.

Julian said he wanted to thank his family, friends and community for their support, and said he appreciated Wagner for keeping the race clean and focused on the issues. Four years is a long time, so Julian said he doesn’t know if he’ll run again, but one thing is certain:

Wagner said that, moving forward, his top priorities on the board will be to complete the construction of a consolidated western elementary school, laying out a long-range plan and attracting qualified teachers. Wagner also said he will work to increase the district’s academic performance.

“I feel good,” he said. “It’s an honor to be elected. And it’s a much bigger honor to be re-elected.”

Wagner has said previously that, if re-elected, this will be his last term.

In the race for seat 5, representing Salisbury, Hughes, 76, conceded gracefully, saying he thought that many people underestimated Byrd.

“I think Alisha Byrd will make a good board member, I really do,” he said.

Byrd, 40, said she was proud of her win, and mentioned that she had been a little bit skeptical about the election.

Children are her first priority as a new member of the board, she said, and she is committed to providing support and proper compensation for teachers.

“Because that really has to change,” she said.

In the meantime, she’s looking forward to working with the board and “making some things happen.”

In the southeast, Cox said she is interested in working on the district’s new strategic plan. Some of her priorities moving forward are to see the completion of the new western elementary school and to make progress on the district’s capital needs.

Cox said that, unless ”something big” happens, she does not plan to run for a third term.