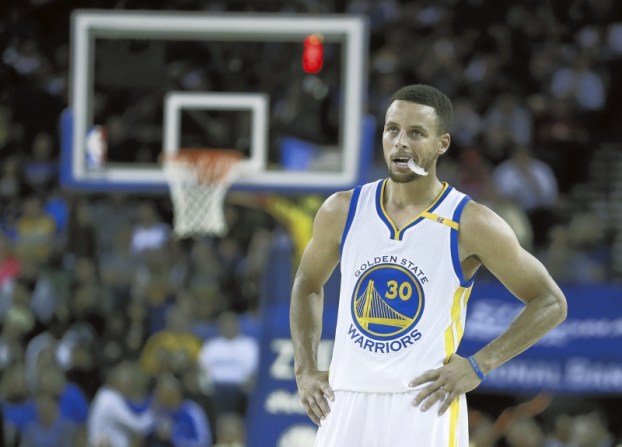 Golden State Warriors' Stephen Curry (30) waits during a timeout during the second half of an NBA basketball game against the New Orleans Pelicans Monday, Nov. 7, 2016, in Oakland, Calif. (AP Photo/Ben Margot)

OAKLAND, Calif. (AP) — Stephen Curry let it fly from the top of the arc, backpedaled as his record-breaking 3-ball dropped and then wildly began bobbing his head and shuffling his feet with the swagger of a two-time reigning MVP.

Add another remarkable achievement to a long list of them for Curry: most 3-pointers in one game.

The star guard sank 13 to set an NBA mark — one game after missing all his 3-point tries for the first time in two years — and the Golden State Warriors beat the winless New Orleans Pelicans 116-106 on Monday.

“This was a special night,” Curry said.

He finished with 46 points, three days after his league-record streak of 157 games with at least one 3 was snapped when he went 0 for 10 on 3-point tries in a 117-97 road loss to the Los Angeles Lakers.

“I was hard on myself in practice the last two days. I had pretty good shooting sessions,” he said. “I don’t overreact to games like that whether I go 0 for 10 or 2 for 12 or whatever it is. My process is the same, but I had another level of focus the last two days trying to get my rhythm back and see the ball go in.”

Curry shot 13 of 17 from beyond the arc in his seventh career game with double-digit 3s. He broke the mark with 2:23 to go and bobbed his head in delight as the crowd roared.

Curry shared the previous 3-point record of 12 with Kobe Bryant and Donyell Marshall.

“Nothing you can do about it. He was being Steph,” Pelicans star Anthony Davis said.

Grabbing back the spotlight from new Golden State star Kevin Durant, Curry raised his right arm and pumped his chest all night, howling and pointing as one shot fell after another. He went 16 for 26 overall in his first 40-point performance after leading the NBA with 13 last season.

Warriors fans enjoyed every minute of it, chanting “M-V-P! M-V-P!”

“That was quite a show. Not at all surprising the way Steph bounces back from bad nights,” Golden State coach Steve Kerr said.

Klay Thompson had 24 points with two 3s as the Splash Brothers looked far more in sync from long range at last. Durant added 22 for the Warriors.

Draymond Green had his second double-double with 12 rebounds and 11 assists for the Warriors, who were back at Oracle Arena after they embarrassed the Oklahoma City Thunder 122-96 there in Durant’s first game against his former team last Thursday.

Thompson — 2 for 10 against the Lakers from 3-point range, a combined 0 of 13 vs. Phoenix and Portland and 9 of 46 overall (19.6 percent) this season coming in — missed his first three attempts before hitting from the baseline late in the second quarter as the sellout crowd went crazy.

Curry knocked down his first 3-point attempt at the 7:29 mark of the first quarter. He received a technical with 1:45 left in the third for arguing he was fouled by Davis on a 3-point attempt.

Pelicans: E’Twaun Moore added 15 points. … The Pelicans signed veteran G Archie Goodwin and waived injured G Lance Stephenson, scheduled to have surgery to repair his torn groin in Philadelphia on Tuesday. … New Orleans lost for the 15th time in the past 16 games against Golden State.

Warriors: David West appeared in his 900th regular-season game, one of 22 active players to reach the number. … Curry has made a 3 in 81 straight home games. When he came up empty Friday night in Los Angeles, it was the first time Curry did not hit a 3 since Nov. 11, 2014. … Rookie Patrick McCaw returned from missing four straight games with a sprained left ankle sustained late in the first meeting vs. New Orleans. C Anderson Varejao was inactive. … Former Warriors player and coach Al Attles celebrated his 80th birthday, receiving a video tribute and the birthday song with cupcakes after the first quarter.

Durant has scored 20 or more points in 71 straight regular-season games, matching Kareem Abdul-Jabbar for the fifth-longest streak in NBA history.

Monday marked 70 years to the day since the Warriors played their first game in franchise history . The Philadelphia Warriors beat the Pittsburgh Ironmen 81-75, watched by a crowd of 4,185.

Pelicans: At Sacramento on Tuesday in their first visit to the Kings’ new Golden 1 Center. It’s the middle game of a three-game road trip. New Orleans has won six straight in the series and four in a row on the road.

Warriors: Host Dallas on Wednesday looking for their fourth straight victory and 13th of 16 in the series.

By Dennis Davidson dennis.davidson@salisburypost.com SALISBURY — NFL Hall of Fame coach Bill Parcells once said: “You are what your record... read more