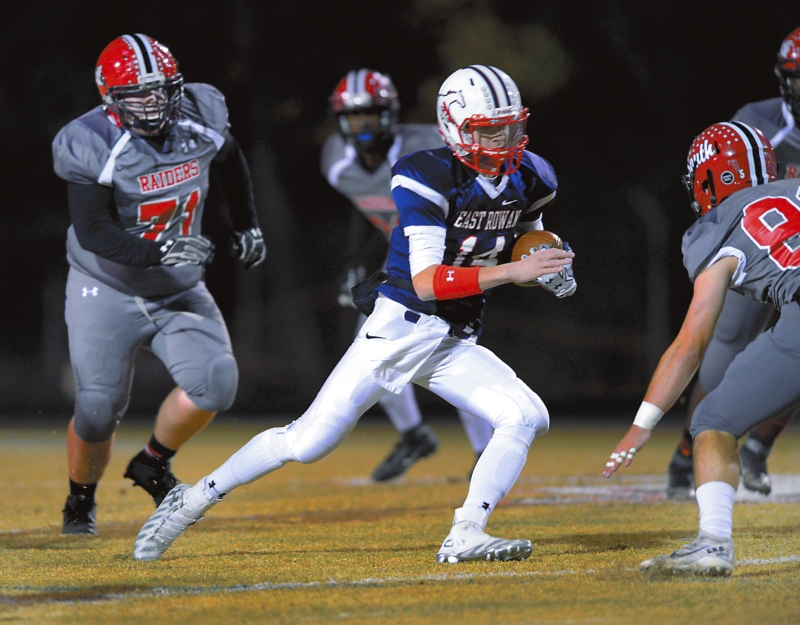 Prep football notebook …
Footballs may not be in the air at Carson, but love is.
Riley Gallagher no doubt set a record for Salisbury High tight ends when he grabbed 16 touchdown passes in just two seasons (2009-10). Now Gallagher has committed to becoming the son-in-law of his former SHS coach Joe Pinyan.
Pinyan is now at the helm at Carson. Gallagher recently became engaged to East Rowan graduate Amie Pinyan, Joe’s daughter.
“I know they met at an East Rowan ballgame when they were sitting close to each other in the crowd,” Joe said. “The word was that Riley had met this really cute girl. The only problem was that her father was Coach Pinyan.”
Gallagher sustained several concussions in high school and another one at Methodist College ended his playing career. He then transferred to Appalachian State, where he earned degrees in actuarial sciences and mathematics. Now he works in the insurance field in Wilmington.
Amie will be graduating from Appalachian State in 2017.
The Pinyans are an Appalachian State family that bleeds black and gold. From birth, Amie didn’t have much choice about where she would be going to college. Her full name is Amie Patrice Pinyan. That’s right — APP.
•••
D.J. Fulcher came through with two interceptions and several breakups for Carson in a 15-3 win against Cox Mill that pushed the Cougars into the 3A state playoffs.
“The great thing about that is D.J. was coming off a really tough game against Hickory Ridge,” Pinyan said. “But that’s the thing about playing defensive back. You’d better have a short memory.”
•••
Andrew Jerman, the standout safety, was hurt in the Northwest Cabarrus game while helping out at running back. He sustained a season-ending concussion on a sideline hit.
With Jerman out, Carson moved spur Cameron Rayfield to safety against Cox Mill and also used quarterback Owen White some in the defensive backfield to spell Rayfield.
“Cameron played great,” linebacker Isaac Bell said. “And Owen will lay the wood on you.”
•••
Senior defensive linemen Blake Daniels and Matt Beaver had to change numbers because they’re both being used on the offensive line and had to have o-line eligible jerseys. Daniel switched from 7 to 77, while Beaver changed from 45 to 54.
“We doubled one and we flipped one,” Pinyan said. “But that says a lot about those kids that they were willing to give up their numbers as seniors.”
•••
Pinyan said one reason Carson went into a slide was the broken ankle suffered by kicker/punter Cole Howard, who was hurt on a kickoff in the East game in Week 4.
“Our kids have done a good job, but we didn’t have anyone else who could kick it in the end zone and make teams go 80 yards,” Pinyan said. “You don’t miss that until you don’t have it. People have pointed a lot of fingers at why we went into a spin, but losing Howard was as big a reason as any.”
•••
The Cox Mill win was the 122nd for Pinyan as a head coach. He’s fifth all-time in Rowan County, just three behind Larry Thomason, who coached a lot of fine North Rowan squads.

North Rowan
In a 43-7 win against Salisbury, Dalynn Cuthbertson saved a touchdown when he caused a fumble with a big hit near the goal line on SHS quarterback Tyquan Jones.
•••
North rushed for 349 yards against the Hornets, topping 300 for the second time this season.
Jaleel Webster and Jayden Jones both went over 100 yards, the first time North’s had two 100-yard backs in the same game since JaReke Chambers and Andra Cowan did it against Carson early in the 2014 season.
North is averaging 200 rushing yards per game.
•••
North had a season-high four interceptions against Salisbury, with Javin Goodine, Josh Ellis, Terren Smith and A’Jon Jones getting one each.
•••
Defensive end Zion DeBose has some staggering stats this season. He has 16.5 sacks, 26.5 tackles for loss and 41 QB hurries.
•••
Linebacker Nautica Patterson, a sophomore, had 11 tackles against Salisbury. That’s two straight double-figure games for him.
•••
North (9-2) will be seeded as a 9-1 team for the state playoffs and could get a No. 1 seed.

East Rowan
East Rowan’s 47-0 win against South Rowan put the Mustangs (4-7, 3-6 SPC) in the 3A state playoffs.
It was the most points scored by East since the 50-49 win against Freedom in the 2014 playoffs. It was the most lopsided margin in an East win since the Mustangs blasted North Iredell, 49-0, in 2012.
•••
Max Wall only needed five carries to post his seventh game of the season with more than 100 rushing yards.
•••
Sophomore linebacker Christian Bennett paced a defensive unit that posted East’s second shutout in the last five weeks. Bennett has caused five fumbles this season, and he broke up two passes against South Rowan.
•••
Sophomore Justin Smith threw four TD passes against South to push his season total to 10. The sophomore’s season has really taken off in the last few weeks.
•••
Sophomore receiver Sam Wall has five TDs in the last two weeks.
•••
DB Wesley Porter had a rushing score, so he’s now gotten TDs in four different ways — rushing, receiving, kickoff return and interception return.

Salisbury
While Salisbury wrapped up a 3-8 season with a 43-7 loss to North Rowan, the Hornets have a brighter future. Their jayvees were CCC champs. The SHS jayvees dropped three close non-conference games to strong programs —West Montgomery, Lake Norman and Ledford.
Nick Austin’s 83-yard TD grab on a one-handed catch was his first — and last — reception of the year.
•••
Salisbury has dropped four straight games to North Rowan.
That’s probably a rivalry game that will have to played early next season with the Cavaliers going back to 1A and competing in a different league.
•••
Salisbury will be in a 10-team league next season. The Hornets have a lot of history with most of the teams except the new school — Oak Grove. Salisbury will be playing North Davidson for the first time since 1984.

West Rowan
All but lost in the 27-7 thumping the Falcons took from Hickory Ridge was a strong effort by West’s defense in the second half.
Hickory Ridge only had 21 snaps in the second half, including two negative running plays and two passes that were intercepted. The Bulls made only one first down in the second half after piling up 12 before the break.
•••
West defensive lineman Tyler Wheeler was taken from the field by ambulance, but coach Joe Nixon indicated on Saturday that Wheeler was OK.
•••
Wheeler, L.J. Robinson, Paris Hillie, Rodney Howell and Arturo Vera had big stops for losses for the Falcons. Hillie and Malcolm Ingram picked off passes.
Ingram has at least one pass interception in five straight games, which may be a record.
•••
Offensively, West couldn’t get it done against the Bulls, who rely heavily on a defense led by lineman Dan Louba. Louba was injured earlier in the season, but he’s making up for it now.
West usually gets its running game going at some point, but it just didn’t happen against the Bulls, even after halftime adjustments.
West’s biggest most successful running play in the second half was a 4-yard scramble by quarterback Payne Stolsworth. Jovon Quarles, who has rushed for more than 1,200 yards, had seven carries in the second half and didn’t gain an inch on any of them.
West is a solid offensive team that was averaging 27.5 points per game before it ran into the Bulls.
•••
West is 8-3 this year and hasn’t had a losing season since 1998. The Falcons are expected to at home at least for the first round of the 3A playoffs and possibly for the second.

South Rowan
The Raiders closed the books at 1-10 in their last season in 3A for the foreseeable future.
Obviously, it was a tough year.
South actually scored fewer points (down from 116 to 93) and allowed more points (up from 456 to 466) than it did in 2015.
The ADM (Average Daily Membership) numbers for school enrollment tell part of the story. South was by far the smallest school in the South Piedmont Conference with fewer than 1,000 students. East Rowan and West Rowan were the only other SPC schools with under 1,200 students.
South figures to be near the top enrollment-wise next season in the 2A Central Carolina Conference.
North Davidson and Ledford are currently the biggest schools in that 10-team league but both are going to lose enrollment to Oak Grove, a new school.
Central Davidson figures to be larger than South, while East Davidson is going to be about the same size as South. South should be larger than Salisbury West Davidson, Lexington and Thomasville.

Davie County
Davie County Enterprise Record sports guy Brian Pitts provides non-stop Davie statistical information.
Here’s the latest:
Linebacker James Boyle is having an All-State caliber year with 155 tackles, 19 tackles for loss, five sacks, eight pass breakups and eight forced fumbles.
Linebacker Cody Hendrix has even more tackles for loss (26) and sacks (7) and has 136 tackles.
Pitts declares them the top tackling duo for the War Eagles since D.J. Rice and Logan Buchanan on the 2004 team. Boyle and Hendrix have 291, so they should top 300 in the first quarter of their first playoff game.
•••
Who will Davie (10-1, and seeded at 10-0 after dropping the non-conference loss to Dudley) take on in the first round? Maybe Southeast Guilford (6-4). Fans will find out on Saturday.

A.L. Brown
A.L. Brown (8-3 and seeded 8-2 after dropping the Mooresville loss) is projected by some experts to be on the road for the first round of the 4A playoffs in a 4 vs. 5 game. The Kernersville Glenn Bobcats loom as a potential foe, but nothing will be official until Saturday.
The Wonders likely will be in an eight-team group where the teams with the best records would be Greensboro Dudley and Davie County. If the Wonders indeed are in the 4-5 game, then Davie is a likely second-round opponent.
•••
While the Wonders were 6-6 in 2014, they haven’t had a losing season since 1977.
•••
The future is bright, especially with the Wonders returning to the 3A ranks next season. A.L. Brown’s jayvees went 8-2, with the only losses coming to Mooresville and Mallard Creek. The Wonder jayvees took a forfeit win from Hopewell in their final week, while the Wonders’ varsity romped 55-6 over the Titans.