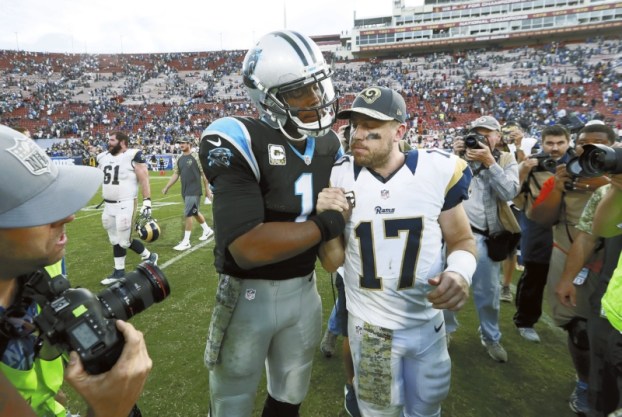 Newton’s call with Goodell was an end-around

Of all the head-scratching calls in Week 9, the biggest might have been the one answered by NFL Commissioner Roger Goodell before the weekend’s games began.

Cam Newton complained loudly after no flag was thrown when Calais Campbell crashed into him below the knees in Week 8. Dean Blandino, the NFL’s senior vice president of officiating, agreed Arizona’s pass rusher should have been flagged for roughing the passer.

Newton again took his share of big hits Sunday in Carolina’s 13-10 win over the Rams after his complaints about the league’s commitment to player safety dominated headlines last week.

“Not worried about that,” Newton said when asked if the officials had done a good job keeping quarterbacks safe. “Just trying to find ways to win football games.”

It won’t be that easy to dismiss the events of last week, however.  This end-around isn’t necessarily over.

Newton said he didn’t feel protected in the pocket. He said he wasn’t seeking special treatment, just equal treatment. And he vowed to take his case directly to the commissioner, which he did last Tuesday when he spoke with Goodell by phone.

While Newton has a point that defenders are often getting away with illegal hits on him, what he did in talking to Goodell was an end-around that could have unintended consequences.

What happens when a player who’s not a superstar or reigning MVP wants to skip the usual protocol and take his grievance directly to the commissioner? Will Goodell take his call, too? If not, Newton’s getting the preferential treatment he swore he wasn’t after.

FLAG FOOTBALL: Week 9 also provided us with a player who did an imitation of an official and quickly paid a steep price. Tight end Travis Kelce gave new meaning to throwing in the towel , and his protest of a non-call escalated into the worst decision of the weekend.

Kelce was furious when the officials didn’t penalize Prince Amukamara for pass interference after the Jaguars cornerback hooked him in the end zone in the fourth quarter of Kansas City’s 19-14 victory.

Kelce took his towel and chucked it toward one of the officials as if it were a penalty flag. Kelce was ejected for his display, then petulantly high-fived fans as he was escorted to the locker room.

“As soon as the ref took off his hat (to throw), I knew I was out. Felt like an idiot,” Kelce said. “It was a terrible decision … I can’t throw my flag at the ref. He can throw his all day long.”

SHOWDOWN MELTDOWN: There were several curious calls by the Broncos in their showdown at Oakland that resulted in them tumbling to third place in the AFC West with a 30-20 loss to the Raiders:

—After insisting anew the need to establish the run, the Broncos opened the game with three pass plays, all incomplete. Trevor Siemian misfired on his first six throws and Denver went three-and-out on its first four drives, never establishing the run and getting outgained 218 yards to 33 on the ground.

—Broncos coach Gary Kubiak didn’t challenge a ruling that a punt was downed at the 2 even though Taiwan Jones stepped on the goal line and didn’t re-establish himself with both feet on the field of play before punching the ball.

—And on a crucial third-and-8 blitz with 3:37 left, Denver cornerback Bradley Roby gave Amari Cooper more than a 10-yard cushion. It was, to borrow a phrase from baseball, defensive indifference, and Cooper’s first-down catch pretty much sealed it.

PREVENT (THE WIN) DEFENSE: The Vikings had to feel good when they went ahead of Detroit 16-13 with 23 seconds left and the Lions had burned all their timeouts. But on second down from the Detroit 33 with 17 seconds remaining, the Vikings rushed two men and Matt Stafford found Andre Roberts at the Minnesota 40-yard line for a 27-yard gain. That set up Matt Prater’s tying 58-yard field goal and led to Golden Tate’s TD in overtime for the Lions.