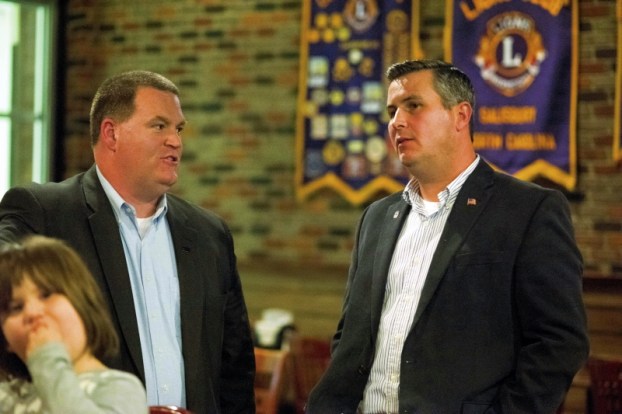 After besting their challengers by more than 10,000 votes in election results Wednesday night, the pair of Republican incumbents will serve another four years on the Rowan County Board of Commissioners. Both were elected for the first time in 2012.

Caskey, a Charlotte police officer, finished at the top of the four-candidate field with 38,277 votes. Pierce, who owns a construction company, finished second with 31,033 votes. Levy, an account executive for MedExpress/Avita Pharmacy, finished shy of scoring a four-year term on the Board of Commissioners with 20,079 votes. Lyerly, a quality assurance inspector at Mueller Systems, rounded out the pack with 11,564 votes.

Tuesday’s win marks the second time Caskey has finished at the top of the pack in a 2016 election. During the Republican primary, he finished first of three candidates.

“I wasn’t really thinking about getting the most votes, but I’m thankful that people thought I am doing a good enough job to send me back,” Caskey said Tuesday evening. “I’m just glad that I’ll be able to go back and finish what we’ve started and continue the direction that our county is going in. We’ve been able to make some changes over the last few years, and I think we’re going in the right direction.”

Multiple times during the campaign, Caskey used a ship metaphor to describe the direction of Rowan County. It took a while to get Rowan going in the right direction, and that’s finally happened, he says.

Pierce expressed similar sentiments as Caskey, saying he’s excited to be able to continue the projects county commissioners have been working on. Most notably, Pierce has been focused on building a county water and sewer system for economic development. Other items Pierce mentioned include improving the Rowan County Animal Shelter, the Rowan County Airport and improving the relationship with the school system.

“If those things had been a little bit further along, I would not have run,” Pierce said. “I’m going to work just as hard as I have the first four years to complete those projects and complete anything else I feel like the county needs to have.”

Because the composition of the Board of Commissioners will stay the same, Pierce said there won’t be any difficult transition.

“Just like when Mike and I were elected, it took us a little while to acclimate ourselves to the existing board,” Pierce said. “It takes some time for most people to get familiar with things too. So, for at least the next two years I think things will go well because we know how we interact with each other.”

After it became clear she wouldn’t secure a spot on the county’s governing board, Levy appeared visibly sad about the results but said she couldn’t be happier. After all, she made history in her bid for elected office. Levy is the first black woman to ever run for the Rowan County Board of Commissioners.

“In a time when our federal election was so divisive, so nasty and filled with a lot of hate and rhetoric, I ran a clean campaign based on issues,” she said. “With that said, I was able to get Republican and Democratic support. It wasn’t enough, but it’s my first time out.”

She added that she thinks county commissioners races should be broken up by district instead of at-large seats.

Lyerly was short in his remarks and said he knew it would be an “uphill battle.”

“I knew it would be hard,” he said. “It’s a heavily Republican County. I’m proud of what I was able to do. I think I put up a good fight, and it was a good clean race.”