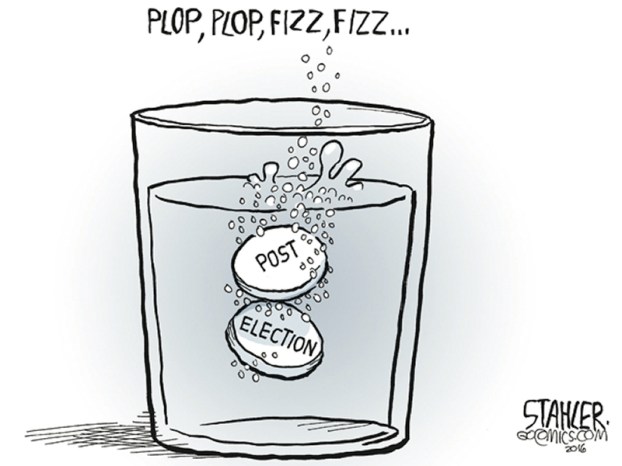 Editorial: New day in US politics

The pundits were wrong, the polls were wrong, and Republican Donald Trump was right. That’s a tremendously sobering thought for the establishment types that Trump challenged this year in the Democratic and Republican parties. Trump probably doesn’t know more about ISIS than the generals, as he claimed, but he evidently is more in touch with the mood of the country than Democrat Hillary Clinton and all the Republicans who turned their backs on the brash outsider.

As this page goes to press, a Trump victory appears inevitable. The nation is split virtually 50-50. A Trump victory would mean all the principles that ruled in U.S. politics for decades have been thrown out the window. Trump is not your usual Republican; what his victory will mean for the GOP remains to be seen.

There’s been a lot of talk about voter dissatisfaction this year, but the revolt only seemed to apply to the presidency. The rebuke of the federal establishment stopped there. Overwhelmingly, the same people are going back to Congress.

North Carolina voters also showed a disconnect between choosing a governor and and electing legislators. The race for governor was so close that, with challenger Roy Cooper ahead by 3,400 votes, Republican Gov. Pat McCrory announced that he would wait for the state Board of Elections to certify the results next week before considering the vote final. But he appears to be on his way out, and Cooper was happy to claim victory. Meanwhile, the General Assembly came through the election virtually unscathed (though that’s more a credit to their redistricting prowess than their popularity). Whoever prevails in the governor’s race will face a newly emboldened legislature with no regrets about House Bill 2 or anything else.

So what is the state of American politics? What will the process become? A huge portion of the country has turned against politics. As conservative columnist David Brooks wrote in the New York Times earlier this year, describing the antipolitics crowd, “They delegitimize compromise and deal-making. They’re willing to trample the customs and rules that give legitimacy to legislative decision-making if it helps them gain power.”

That may be an overstatement; let’s hope so. “Politics is a way of ruling divided societies without undue violence,” Bernard Crick wrote in his book, “In Defence of Politics.” We are indeed divided. Somehow, we have to get along and avoid descending into even greater discord.

Twilight of a tradition? For many years I have prepared individual bags of candy for Halloween trick-or-treaters in my neighborhood.... read more