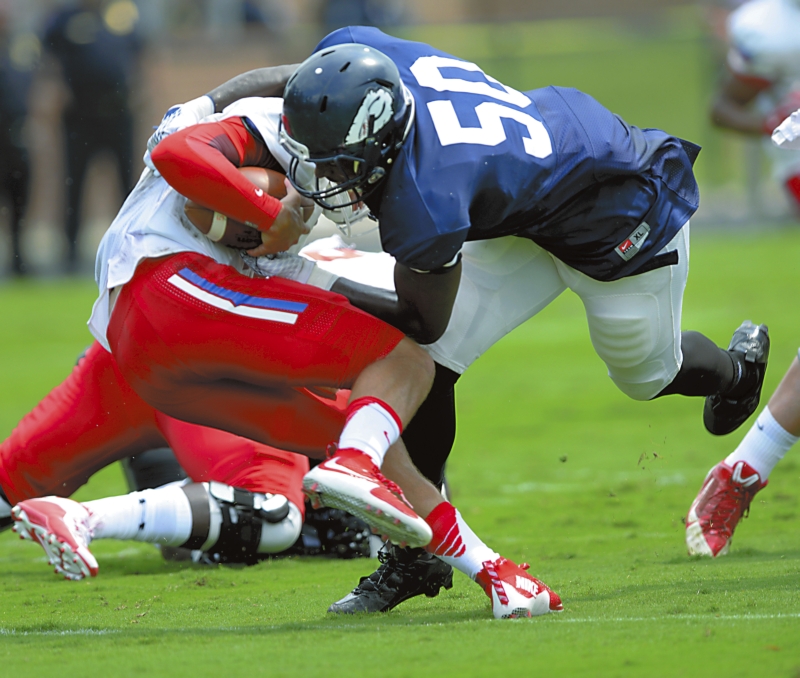 Wayne Hinshaw file photo/for the Salisbury Post ... In a file photo from the 2015 season, Catawba linebacker Jamal Lackey (50) pulls the ball out of the West Georgia runner’s arms and then recovers the fumble on this play.

SALISBURY — Catawba senior linebacker Jamal Lackey has put 232 career tackles in the books — 37 for loss — and he owns 11.5 sacks, five fumble recoveries and four forced fumbles.
He was a special teams player and backup LB in his first three games for the Indians as a true freshman in 2013. He vividly recalls Game No. 4, the Saturday afternoon in Jefferson City, Tenn., that his role suddenly was elevated by defensive coordinator Keith Henry.
“Carson-Newman was driving on us, getting close to the goal line, and I remember Coach Henry yelling, “Lackey get in there!” Lackey said. “Everybody was kind of surprised and looking at me like, ‘Really, Lackey?’ I was kind of looking at me too. Carson-Newman was a top team.”
Catawba won that game in a major upset, and the rest is history. Lackey has never looked back and he’s stayed healthy. He’s played in 42 of Catawba’s 43 football games since he arrived in Salisbury. His final one will be at Lenoir-Rhyne on Saturday afternoon.
Lackey (6-foot-2, 190 pounds) is from nearby Mocksville. Davie County coaches knew they had something special by the time he was a sophomore starter on the 2010 War Eagles team that went 5-6 in the regular season, caught fire in the 4A playoffs, and then made a run all the way to the state title game at Wake Forest against Durham Hillside.
It didn’t go well against Hillside. Davie lost, 40-0.
“That was like playing against a college team,” Lackey said.
Lackey was blessed with rare speed and good height, but he also had a modest assessment of his talent.
He hadn’t allowed himself to think about playing at the next level. Rather than working out during the summer of 2012, prior to his senior season, he was working at Mocksville’s Bojangles.
It was Davie coaches Devore Holman, the defensive coordinator then, and Mike Herndon, the linebackers coach, who convinced Lackey that if he devoted himself to football full-time, football would be the key to his future.
“It’s not like I ever quit football or ever thought about quitting football, but those coaches convinced me football could pay for my education,” Lackey said. “And that’s how it worked out.”
Catawba head coach Curtis Walker was the defensive coordinator at Western Carolina in the fall of 2012. Lackey was on the radar of the Catamounts as a potential recruit because he was disruptive as a high school senior. In Davie’s game against Lexington, Lackey had two fumble recoveries and a forced fumble. Against Alexander Central, he made 15 tackles.
Lackey’s prep career ended with a 14-7 loss to Mount Tabor in the second round of the 2012 4A state playoffs, but his football days were just getting started.
Walker was hired as Catawba’s new head coach in December, 2012.
“Western Carolina never offered Lackey, they went cold on him for some reason, so we got involved with recruiting him hot and heavy after I came to Catawba,” Walker said. “I remember going to Davie, talking to his coaches about him and meeting him. He was a good student, I really liked his stature, and I knew this was a young man we wanted to be part of our program. The only concern we had was that he was so quiet.”
Walker and Radell Lockhart successfully recruited Lackey, who was excited about the chance to play college football so close to home.
It’s been good ride. His sophomore season he tied for the team lead with 10 tackles for loss, and the lone interception of his career early that season became a 67-yard sprint to the house that jump-started a win at Davidson. There also was a memorable, 13-tackle outing against Carson-Newman.
Lackey was a terror as a junior outside linebacker, pacing the Indians with 81 tackles. He was second on the team with 4.5 sacks and 14 tackles for loss. He was named to the All-South Atlantic Conference second team and also made second team on one of the all-region teams.
“He understands our system and his speed allows him to run down a lot of plays,” Walker said. “He just comes to work, makes the tackle and lines up again. You don’t hear a lot out of him.”
Walker said Lackey reminds him of another Davie County linebacker, D.J. Rice, who he coached at Coastal Carolina. Lackey and Rice are built a lot differently — but they have similar demeanors and they achieved similar results.
Catawba won the SAC title in Lackey’s junior year. Not surprisingly, he lists that championship season and the ring that came with it as his career highlights.
“We came close to getting a championship in high school, so it was great to get one in college,” Lackey said.
This has been a surprisingly tough season for the Indians (4-6). Things rolled and bounced their way in 2015, but this season, if it could go wrong, it did go wrong.
Still, Lackey has done his share. He’s tied for second on the team in tackles with 62. He has eight tackles for loss and three sacks.
“He’s been a very fine player,” Walker said. “In my eyes, he’s been a four-year starter, and he’s carried on that tradition of outstanding Catawba linebackers. He’s played with pride. He’s held himself to a high standard.”
Lackey has been a fine student and is closing in on a degree in exercise science that should open a lot of doors for him after he leaves Catawba.
“The coaches here have always kept me on the right path,” Lackey said. “They’ve guided me.”
Lackey hopes to repay them with a victory on Saturday in Hickory.
“This hasn’t been the best season,” Lackey said. “But we want to win this last game so our young players can build on it for next year. Winning this last game means a lot to all of us.”